An Intellectual-Diversity Agenda for UVa 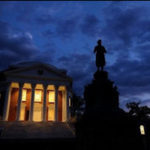 The University of Virginia’s insurgent alumni have made it very clear what they’re against. They don’t like profane signs on the Lawn that disrespect the University. They oppose contextualizing the Thomas Jefferson statue. They’re unhappy with the endless self-flagellation for the institution’s association with slavery and segregation, as if nothing has changed in the past 55 years. I’m one of them. I share the same concerns.

But what are we for? If we can’t articulate a positive agenda for Mr. Jefferson’s University in the 21st century, people will think us like those cranky old men with pants hiked up to their chests who shake their fists and yell, “Get off my lawn!” or at worst, a bunch of old, white, Southern racists who can’t accommodate themselves to the younger generation’s thirst for social justice.

Those of us who are unhappy with UVa need to start talking about what new direction we’d like to see it take. I have some preliminary thoughts.

First, UVa should strive to be the best public university in the country, not a Southern Ivy.

Second, UVa should make itself the most affordable top-tier higher-ed institution in the country, to be accomplished by driving down costs, not by using tuition as a vehicle for the redistribution of wealth.

Third, UVa should become a beacon for intellectual diversity and the vibrant exchange of ideas.

Fourth, UVa should create an inclusive, color-blind culture that welcomes people from all walks of life but values students for their individual achievements, not for their racial/ethnic/gender/ sexual identities.

Let’s examine each of these more closely.

Best public university. As a publicly owned and funded institution, the undergraduate programs of the University of Virginia should be operated for the benefit of Virginia and its citizens. (The Law School and Darden School, which are highly autonomous and compete on a national stage for faculty and students, are exceptions.) If that means admitting a certain percentage of out-of-state students in order to create geographical, cultural and intellectual diversity, not to mention revenue from out-of-state tuition, that’s fine. But the Board of Visitors should hold the interest of Virginians first and foremost in their minds.

If that means abandoning the futile ambition of becoming a “Top Ten” university, as measured by U.S. News & World-Report, then so be it. The U.S. News methodology for ranking colleges and universities is based on the values and priorities of U.S. News editors, not the UVa Board of Visitors or the citizens of the commonwealth. The most obviously perverse metric in judging the prestige of an institution is the average SAT scores of the entering class. That’s fine for Harvard and Yale, but not for a state university drawing from a smaller pool of applicants. The Board needs to establish its own metrics of success and strive to achieve them.

Among the metrics UVa’s Board should consider is “educational value added.” Ivy League institutions have perfected the machinery of selecting the highest-IQ kids in the country. The ability to recruit high-IQ students says nothing, however, about the value of the education they receive. To measure the value of an institution, one must capture the degree to which students gain knowledge and the ability to apply it.

Affordability. UVa is commonly said to offer excellent educational value for the money. Perhaps the reputation is deserved, but there is no denying that the University has aggressively increased tuition over the past two decades, and that only a modest fraction of that increase can be blamed on cutbacks in state support. Like every other institution, UVa suffers from mission creep, declining faculty productivity (the more esteemed the faculty member, the fewer courses he or she teaches), engorged bureaucracy, resistance to integrating digital technologies into the delivery of learning, and pedagogical and experiential investments of dubious value. UVa should set its sights on becoming a national leader in driving down the cost of undergraduate education and making the university more financially accessible to all. This focus on cost should extend from tuition to fees, room, board, textbooks and other costs. Needless to say, making UVa more affordable is integral to making it the nation’s premier public university.

Intellectual diversity. The greatest threat to higher education in the United States today is the success of the ideological Left in squelching (“canceling”) dissenting points of view in the name of social justice. Conformity stultifies inquiry, experimentation, and innovation. Even as universities embrace racial diversity, they are becoming ideologically monochromatic. Indeed, this phenomenon is so pervasive nationally that UVa now has an opportunity to create a powerful higher-ed brand as a rare institution that promotes intellectual diversity. Mr. Jefferson’s University can stand out as an institution that fosters a wide range of ideas reflecting a wide range of perspectives and spurring spirited debate. Many students and faculty members would find such an environment exhilarating — far preferable to campus cultures where left-wing pieties are never challenged and conservative views routinely stifled.

Indeed, given the malaise in higher education today, the ability to stand out as a beacon of intellectual diversity would give UVa a huge competitive advantage in recruiting the smartest young faculty and smartest, most ambitious students — including minorities.

Color-blind culture. Clearly, what UVa is doing now is not working. As vividly demonstrated by the “F— UVa” sign on the Lawn, the university’s proclivity for wallowing in past injustices, ignoring the very real progress in rectifying past sins, and engaging in constant self flagellation for white guilt has not endeared minority students to the institution. In effect, UVa has effectively, if unintentionally, re-branded itself as a racist institution — at the very least an institution that has failed to overcome its racist past. Not only does this mindset feed the sense of grievance and alienation of current minority students, one wonders why anyone would expect minority faculty members or students would want to attend such an institution. Ironically, to achieve the goal of greater ethnic diversity, UVa needs to stop apologizing for past sins and look toward the future — a future in which everyone is entitled to be treated with dignity and respect and judged on their individual accomplishments, not their racial identity.

I think these goals, or something like them, are worthy of consideration. I acknowledge that changing the university’s culture will be a long and protracted process. There will be furious pushback against these ideas, both within the university and from without. Moreover, practices such as tenure guarantee that faculty turnover will be grindingly slow. Still, the effort must be made. We are battling for the heart and soul of one of the nation’s great universities — indeed, for the heart and soul of the nation itself.