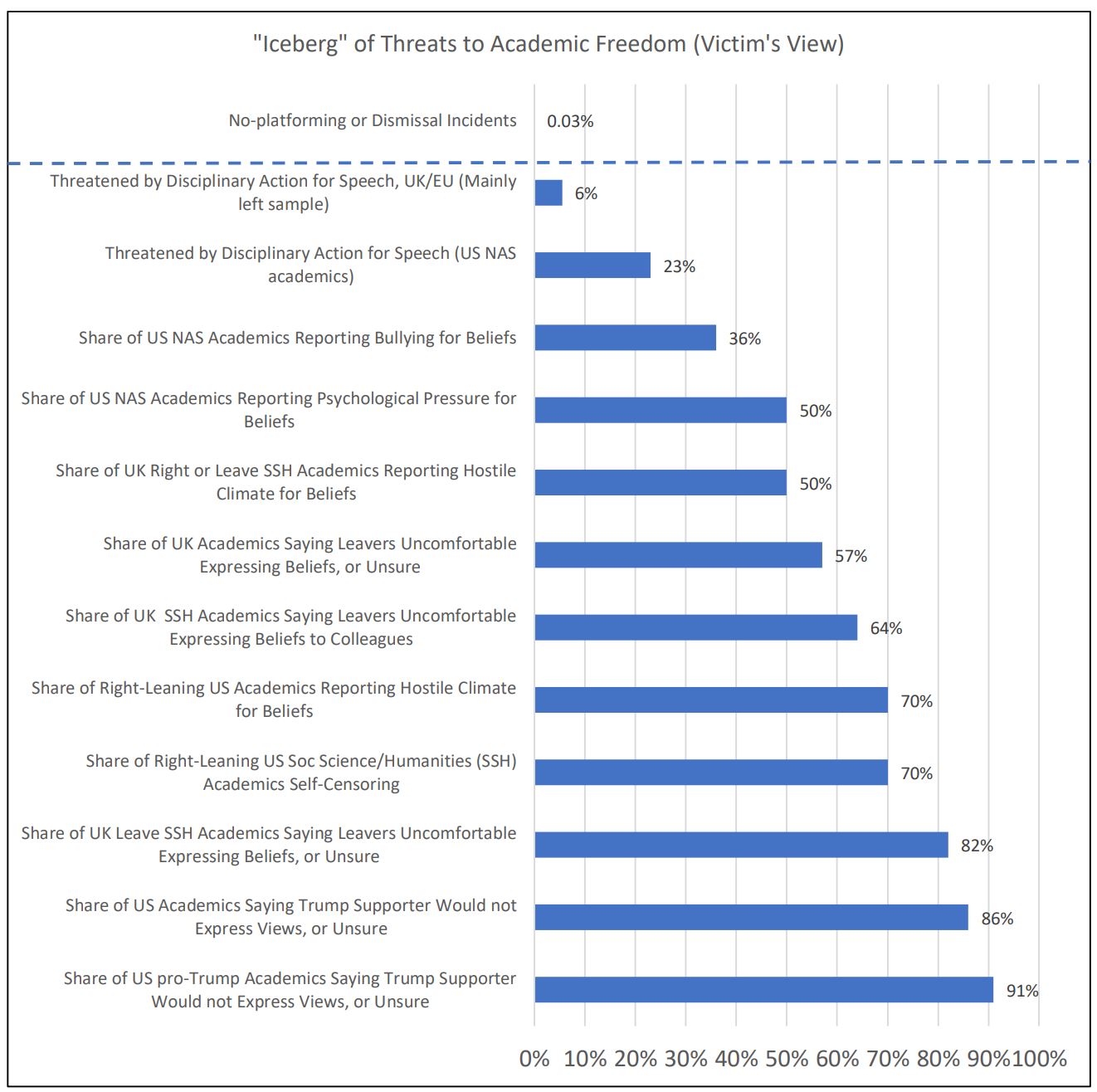 Dismissals and de-platforming of conservatives in academia have gotten a fair amount of media attention, but they are only the most outrageous and visible of the threats to intellectual diversity on college campuses. In a new study for the Center for the Study of Partisanship and Ideology, Eric Kaufman, a professor of politics at the University of London, finds that lesser forms of discrimination against conservatives and other intellectual minorities, such as gender-critical feminists, occur outside of public view.

In “Academic Freedom in Crisis: Punishment, Political Discrimination, and Self-Censorship,” Kaufman surveyed professors and PhD candidates in universities in the United States, Great Britain, and Canada. Bacon’s Rebellion readers must be cautious about extrapolating from these broad general findings to specific Virginia colleges and universities — there are exceptions to every rule, and the survey does not drill down to the level of individual institutions. But the study provides a useful framework for understanding how intolerant leftists are slowly but steadily turning the social sciences and humanities in Virginia, as in the rest of the English-speaking world, into intellectual monocultures.

While not all left-of-center academics discriminate against conservatives, a significant percentage do. More than four in 10 U.S. academics would not hire a Trump supporter. (Gender-critical feminist scholars face even worse discrimination.) In the U.S. a third of right-leaning academics and PhD students have been threatened with disciplinary action for their views, while 70% report a hostile department climate for their beliefs.

Kaufman draws a distinction between “hard authoritarian” and “soft authoritarian” practices. The hard variety entails de-platforming, dismissal campaigns, social media attacks, and disciplinary actions. The soft variety consists of discrimination in hiring, publication and grants. While a relatively small minority of academics practices “hard” authoritarian tactics, many left-of-center academics are cowed into silence or neutrality when the targets are conservative.

Historic data show that the social sciences and humanities have shifted from approximately two left-of-center professors for every conservative in the 1960s to a ratio of 1o to 1 today. That ratio is likely to get even more lopsided.  Particularly worrisome is the fact that older left-of-center academics tend to be more tolerant of differing views, while younger academics and PhD students are less tolerant. As the younger generation displaces the older, the level of intolerance will intensify. Meanwhile, as conservatives increasingly perceive academia as a field where they are unwelcome, fewer will pursue careers there.

Turning the nation’s universities into intellectual monocultures is a tragedy in many ways. When instruction becomes indoctrination, students suffer. When professors all think alike (or are afraid to express non-conforming views), the range of permissible research shrinks. When colleges and universities become incubators of ideologies that half or more of the population finds oppressive, electoral support for funding public education declines. Why should middle-class taxpayers fund institutions that hate them?

Here in Virginia we are seeing the early signs of a backlash against stultifying intellectual conformity on college campuses. Conservatives have bitched and moaned in niche conservative publications for years, but now they’re organizing. We saw it first at Washington & Lee University with the formation of the General’s Redoubt to fight a move to delete Lee’s name from the university. Then we saw it at the University of Virginia, sparked by the “F— UVA” sign on the Lawn, but broadening to a wider range of issues including the preservation of intellectual diversity at Mr. Jefferson’s University. (Full disclosure: I am vice president-communications for the newly formed group, The Jefferson Cabinet.) And I have heard inklings that alumni of Virginia Military University are organizing in reaction to the racism investigation ordered by Governor Ralph Northam.

As conservatives and moderates fight to take back their cherished institutions from intolerant leftists, they need to arm themselves for the battle. They need to understand — and make visible — the many ways in which discrimination against conservatives expresses itself. Consulting Kaufman’s study would be one good place to start.