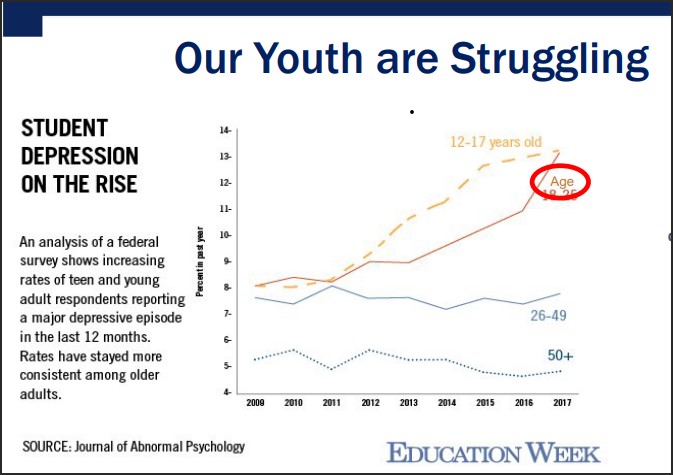 A federal survey shows a 63% increase in depressive symptoms in teens and young adults in the 10 years prior to COVID. Source: “Hoos Connected: Enhancing Social belonging & Support Among UVa Students“

A new preoccupation of college administrators across the United States is how to give students a sense of “belonging.” The concern is understandable. There is increasing awareness that America is experiencing a “loneliness” epidemic, as reflected by a 40% rate nationally of anxiety, depression and other diagnosed mental illnesses among college students. If students fail to connect with classes, professors, or other students — to feel part of a community — they are more likely to fall into a state of anxiety, depression and self-destructive behavior.

The University of Virginia is trying to address the problem of loneliness and isolation with a program called Hoos Connected. Psychology Professor Joseph P. Allen, executive director, will brief the Board of Visitors tomorrow about the program.

Hoos Connected organizes weekly small-group discussions and activities for first-year and transfer students. In a pilot program, according to a PowerPoint presentation posted on the Board website, Hoos Connected participants and a control group of non-participating students started out roughly equivalent in a measure of student loneliness. Among the goals was to get students to make inter-personal connections and recognize “how much we all have in common beneath the surface.” By the end of the semester, the Hoos Connected cohort showed a decline in loneliness, while the control group exhibited an increase, according to Allen.

The improvement among the Hoos Connected group is encouraging. But here’s a question the Board of Visitors should ask: What’s going on with the rest of the students?

The meaning of the graph in Allen’s PowerPoint is not crystal clear. Is the metric displayed in the graph the percentage of students expressing feelings of loneliness, or a measure of intensity, or something else entirely? Hopefully, Allen will explain that to the Board. Whatever the precise meaning, the number for the control group went up, which suggests that non-Hoos Connected participants experienced increased loneliness over the semester. Whether or not that increase was statistically significant is impossible to tell from the graph alone, but it is a potential source of concern.

It is understandable that Allen would wish to emphasize the success of his program for those who participated in it. But I hope someone on the Board will explore the implications of Allen’s graph for the rest of the student body. Someone should ask Dean of Student Affairs Robyn Hadley why she thinks non-participating students are exhibiting greater loneliness.

One would expect new students to become less lonely as they attend classes, join clubs, meet people, and have time to find their niche and make friends. Is there something toxic about the campus climate that induces students to feel more lonely after a full semester?

One benchmark for analysis might be the “2018 UVA Diversity and Inclusion Climate Survey” initiated during the Teresa Sullivan administration and largely ignored upon its release. That survey of undergraduates, graduate students, faculty and staff broke down the community into nine identity groups, including race/ethnicity, sex, gender identity, socioeconomic status, political orientation and others. While the survey asked respondents if they felt that their identity was “respected” at UVa, it did not address issues of loneliness, isolation or mental illness.

Board members might ask if it is time, four years later, to conduct another survey.

The issue seems all the more urgent since the senseless Nov. 13 mass shooting of five students. The Attorney General’s investigation into the tragedy could reveal insights into the shooter’s state of mind. But anecdotal evidence suggest that loneliness, isolation, alienation and/or mental illness might have been factors behind the shooter’s rampage. There may be systemic issues that need to be addressed. Perhaps programs like Hoos Connected, which Allen would like to expand, could provide a psychological vaccination against a repeat of the Nov. 13 horror.

Hopefully, the Board will have the opportunity in the hour and a half allotted to the Academic and Student Life Committee, which will address several other topics, to fully discuss the issue of loneliness and belonging. The Jefferson Council will be there, and we’ll report back on what we hear.

Update: I caught up with Allen after the Board of Visitors meeting today. The scale on his chart, he explained, was a measure of the intensity of loneliness, not a percentage of students describing themselves as lonely. His conjecture for the increase in loneliness over the course of the semester is that students are more likely to be upbeat and optimistic at the beginning of the semester and more stressed out and fatigued by exams at the end of the semester.

In my era, starting the professional course in architecture we carried 18 hours of mostly difficult courses with labs leaving little free time. Ex: 8:00 a.m. Sat. Calculus Class. I found my fraternity provided companionship, “belonging,” reduced cost dining, and residence starting 2nd year. I made some friends for life. I understand the woke world of today doesn’t think highly of fraternities, and is trying bureaucratic solutions to the aforementioned problems of loneliness, etc. Fraternities varied widely, but mine had a fine group of young men.

In my first year, the “common enemy” was the Darden curriculum. I survived this heavy workload with encouragement from my assigned study group or bonding with everyone else in the library or the many class-wide social programs. I treasure those friends I met sitting with me in that “foxhole.”

A reply to John Moffet’s reply: I appreciate the dialogue. It’s all to the good the avenues available worked well for you. But, the above stats evidence many students feeling left out in the cold. We had a lot of interaction in the small A-School as the class shrank from 73 to 17 who graduated in 69′. Later I attended The Graduate School at U.C. Berkeley. There were fraternities then. The members were chosen by lottery from the students who wanted to join a fraternity, certainly resulting in more diverse groups and eliminating rush. I do think there is something to be said for a central “house” for dining, social activities, and possibly residence. I don’t think this result will come from the thinking now.

Fraternities are good, and study groups certainly help. I had one at Darden as well. But here is my main view on this, and I know I will receive lots of negative feedback. Overall, one has to make his own way in the world. College is an easy place to make friends and combat loneliness compared to the real world. I do not understand time and resources (other than that which has been in place for years) spent on this issue, particularly at the BOV level. UVA students should be able to figure it out. Just my opinion.