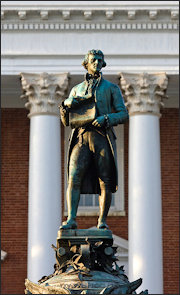 I was proud of the University of Virginia last night.

The Young Americans for Freedom organized an event, “Defending Thomas Jefferson,” featuring National Review editor Rich Lowry and Texas Congressman Chip Roy, both UVa alumni. Organizers believe it was the first time that conservative speakers from outside the university had been invited since former Senator Rick Santorum had appeared four or five years ago. (It’s been so long that memories were hazy about the details).

Many posts on social media had been critical, and there were rumblings that a protest might be organized. But university police posted outside the Newcomb Hall lecture room provided security, and nothing remotely unpleasant occurred.

More than 150 people attended the event, which easily met expectations. What I found most encouraging was the healthy contingent of Black students who came to hear what the defenders of the university’s founder might say. One could deduce that many were not sympathetic to the views of the speakers because they sat silently through the applause lines. But they listened respectfully and, when the time came for questions, a number asked questions that were pointed but polite. (I am pleased to note that one Black student, who spoke with an African accent, said that she found Jefferson inspiring.)

The event was exactly what a great university should be doing — exposing students to different perspectives and facilitating the civil exchange of views. I am delighted that the Jefferson Council played a role in helping make it happen.

It was a valid rhetorical point but not likely to persuade anyone. More effectively, Lowry listed some of Jefferson’s accomplishments that moved the nation from a state of less freedom and equality to a condition of more freedom and equality, even if he did not end the institution of slavery.

It was a good list, and I learned some things I had not known. (T.J. proposed banning slavery in the Northwest territories? Who knew?) I would have explored only one other idea: If Jefferson deplored slavery, why didn’t he free his slaves? The answer: that was easier said than done. In one case slaves acquired from inheritance were bound legally by the conditions set by the inheritance. In another case, slaves served as collateral for Jefferson’s substantial debts. All laws encoding slavery were were unjust, but Jefferson could not break them with impunity.

Also, neither speaker addressed the Sally Hemings controversy but in passing. It is widely accepted by the public that four of Jefferson’s six children were born to his young slave, Hemings. Some of my compatriots at the Jefferson Council consider this a vile slander that remains unproven and unlikely. Frankly, I have not studied the matter in enough depth to have an informed opinion, so I shall evince no opinion. I simply note that the fraught question of Jefferson’s alleged  “rape” of his slave concubine was never raised.

Congressman Roy took a different approach, tying Jefferson’s legacy of liberty to contemporary political issues. All humans are flawed, and Jefferson was no exception. He will be (or has been already) judged by God. We should not waste time defending Jefferson the man, Roy suggested. But we can embrace his ideas.

“We put our faith in principles, not princes,” said Roy. Jefferson’s words in the Declaration of Independence were his “timeless gift to humanity.”

The American system of government is broken, said Roy, and presidential actions are increasingly tyrannical. The principles of liberty and freedom are as relevant today as when Jefferson espoused them. “You’re never on the wrong side when you’re on the side of freedom.”

Note: The author serves as vice president-communications of The Jefferson Council.

Thank you for sharing this! This is the first bit that I have received after registering for The Jefferson Council after reading about it in the Wall Street Journal. I am very pleased that this event occurred at UVA and that students attended, engaged, and were polite and respectful. Agree that this is exactly what a great liberal arts education should include. Well done!!
V/R Susan Roden, College of Arts and Sciences, 1979

It was an excellent program. Congrats to the YAF chapter and Jefferson Council for hosting the event. Mr. Lowery made several notable points, as noted in this article. In particular, though, he made the point, for purposes of current debate, that if Jefferson cannot meet the test of greatness in America’s pantheon of political leaders, then there is hardly anyone who ever could. The criticism of presidents and political leaders for their flaws as human beings is so obvious as to be trite. I conclude, therefore, that the left-wing disparagement of Jefferson is disingenuous. It correctly points out his flaws, specifically with respect to slavery, but that is but a strategy to take down the man in order to take down Jefferson’s philosophy of freedom and limited government. What’s at stake is of fundamental importance.

Thank you for the write-up. Was President Ryan in attendance?

Great summary of an outstanding event!
Thank you Jim.

VERY glad to read this!

Mr. Bacon, Appropos of the Sally Hemings issue, I invite your attention to “In Defense of Thomas Jefferson”, by William Hyland, who evaluates every bit of evidence, pro and con, on this issue, using legal standards of evidentiary admissibility. You might also want to consult “The Report of the Scholars Commission” on the Jefferson-Hemings Controversy, by Robert F. Turner of the UVA Law School, an independent review of all the evidence by a group of more than a dozen scholars from highly regarded universities. It is infuriating to some of us that the clear evidence refuting the now generally accepted conclusion has been and continues to be almost universally ignored.

I attended the event last night and was happy I did so. I was pleased to see an impressive number of students/young adults in attendance. The fact they were there, I believe, speaks of their maturity and inquiring minds. “Woke” or not, they were willing to listen and I applaud them for that.

The most compelling moment for me was at the end of the discussion when Congressman Roy pointed out how many of our revered leaders throughout time in our great countey have had less than shining moments in their lives and/or while in office. He spoke about TJ, JFK, MLK, LBJ, etc., pointing out their transgressions. He and Mr. Lowry emphasized that none of these people were perfect but what they did to make our Country the greatest country on Earth should be paramount. I refer back to my Catholic faith when the woman who committed adultery was to be stoned and Jesus said for those who are without sin cast the first stone. How many of us could throw the first rock? Not me, that’s for sure. Maybe people should stop and think about that before they try to erase Thomas Jefferson from history.

It was great to see this event and I applaud the YAF for making it happen. Jefferson is and should be heralded as one of the most influential contributors to American greatness. In the face of numerous attacks against the presentation, this was a clear victory for speech and for the University Jefferson founded.

Great article. As you know, Jim, I was there. Superb event. This was what intellectual diversity at the University should be all about.

There is hope for truth and civility.

I remain stunned that people do not know the real reason why Jefferson could not free his slaves — it was against the law! Slaves obviously were an asset, and Virginia law prohibited debtors — which Jefferson largely was his entire adult life — from freeing slaves, i.e., giving away an asset, as long as they had debts. Jefferson purposefully decided to keep slave families intact and supported rather than sell some and become debt free . . . and he gets criticized for that…..