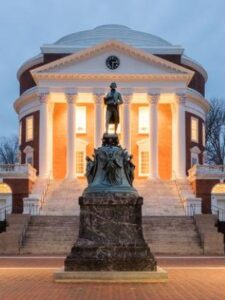 The University of Virginia has taken down the statue of Indian fighter George Rogers Clark and is expunging other monuments and tributes to individuals who fall short of lofty, progressive 21st-century ideals. President Jim Ryan has promised that the statue to Thomas Jefferson, the university’s founder, will stay. But it will be “contextualized.”

What that contextualization will look like is anybody’s guess. The project has been handed to the “Naming and Memorials Committee” for elaboration. Will Jefferson be portrayed as a founding father and progenitor of principles that guide the United States today… or a slave-holding rapist? It is too early to say.

What we do know is that considerable thought has been given to the machinery of contextualization. Whatever the message may be, it will be delivered digitally. Envision standing near the Jefferson statue, or the Rotunda, or the Lawn, or other spots deemed worth of recognition, such as the Black Bus Stop, the Ginger Scott Case, or the Coat and Tie Rebellion. You can take out your smart phone, scan a QR code, and access text and audio descriptions.

But there are warning flags galore as to where this initiative is heading.

“A true history … will not shrink from raising contentious issues and prompting difficult questions,” states a presentation to the UVa Board of Visitors. “We believe that the ethical potential of a contextualization project as here conceived should be not be overlooked.”

Uh, oh. Contentious issues? Contentious for what reason? Difficult questions? Difficult to whom? Ethical potential? Whose ethics? Call me crazy, but I have a hunch that the aforesaid questions will prove to be most “difficult” to those who want to uphold Jefferson’s legacy and university traditions rooted in enduring values, and that the ethical principles applied will be those of the people in charge of the Naming and Memorials Committee.

Remember, the Naming and Memorials Committee is the same group that expunged an inscription to Frank Hume on the Whispering Wall on the grounds that the former Confederate soldier and politician was a white supremacist.

I fear, as many others do, that the supposed the Committee’s “true history” will be one that conforms with the prevalent leftist narrative of the United States as an endless parade of oppressions and depredations.

Hopefully, I will be wrong. There are hints in the Naming and Memorials document that a diversity of viewpoints will be permitted. The authors speak of creating “multi-layered” stories of the past. They write of “refining narratives” based on evolving scholarship. They advocate creating a robust context “not to suggest a particular perspective, but to afford a balanced and fulsome experience.”

“Digital contextualizations,” they write, “should not merely relate the triumphs of the University, but should aspire to advance a balanced, critical, and reflective view in their telling of the University’s history and its role in the nation’s past.”

To carry out this work, the committee urges creation of a “working group” that would convene professional historians, students, local residents, and alumni with relevant expertise.”

In other words, the final product will reflect the input of the selected historians, students, residents and alumni. And who will select them. President Ryan administration, acting at the behest of the Naming and Memorials Committee? That process is still opaque.

I have little hope that traditionalists will play a prominent role in this process. But perhaps the Board of Visitors can be cajoled into ensuring that the contextualization reflects a diversity of views and interpretations.

Perhaps the most important thing I learned as a history major at UVa was that “history” is one thing and “historiography,” or evolving and competing interpretations of history, is quite another. One way to look at the Jefferson statue is to understand how those who erected it thought about Jefferson and what they were trying accomplish by commissioning it. Another way is to look at the statue through a leftist narrative lens of oppressor and oppressed, as many at UVa do today. There is yet another way: seeing the founding fathers as mortal men who, despite their flaws, advanced the ideals we hold dear today; reflecting a view of American history as a two-steps-forward-one-step backwards struggle to create equal rights and opportunity for all.

I would urge the university to embrace an open format that allows competing contemporary views. I am reminded of the conversation that took place about the Confederate statues along Richmond’s Monument Avenue, which also had a study committee before all hell broke loose and the statues came down. A friend of mine, Sidney Gunst, was a fierce advocate of “contextualizing” the statues rather than removing them. He spent hundreds of hours developing an idea similar to UVa’s that would use digital tools to provide the historical context for innumerable statues, memorials, buildings, and locations throughout Richmond. He envisioned dozens of these digital markers around the city to bring the history alive.

Critically, Gunst wanted an open system which incorporated many voice, to which many people could contribute, and in which no one view would drown out the others. He understood that exploring many interpretations of history is far more exciting than being spoon fed an official dogma.

I hope that members of the Naming and Memorials Committee see things the same way…  and, if they don’t, that the Board of Visitors help them see the light.