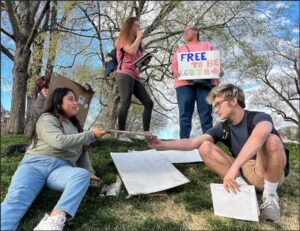 It’s nice to see that The Washington Post finally has acknowledged the presence of The Jefferson Council as a player in the University of Virginia community. Friends and members might take umbrage at how author Peter Galuszka portrays us, but as the old saying goes, the only worse thing than bad publicity is no publicity.

The article, which is pegged on the free speech controversy surrounding former Vice President Mike Pence’s recent speech, describes the Council as “a small group of right-wing alumni” and insinuates that it is comprised of misogynists, xenophobes and racists. Writes Galuszka: “Once a bastion of preppy White men, [UVa] long ago admitted women and has expanded to more foreign students and non-Whites. That apparently seems threatening to the Old Guard, which is critical of the university’s attempts to extend its diversity outreach.”

Alluding to the 2017 Unite the Right rally of “hard-right fascists,” the article segues to the observation that “this most recent reactionary iteration seems to begin with [Bert] Ellis.” Galuszka describes Council President Ellis as a “wealthy television mogul based in Atlanta.” Yup. Just one step removed from advocacy of fascism and White supremacy! (Next time you get a chance, ask Ellis about the most recent entrepreneur he bankrolled.)

This is what we’re dealing with, folks!

I open the floor to comments from readers of this blog to detail the article’s most grievous transgressions. Have at it, folks!