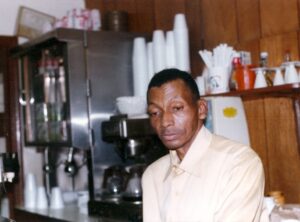 Robert Henry at the counter of The White Spot Photo credit: https://www.wspot.net/wspot/#

Double Gus, all the way. Students who attended The University of Virginia going all the way back to 1953 are likely to be familiar with the White Spot “restaurant.” The term “restaurant” is in quotes because The Spot, as it is affectionately known, is a hole in the wall that originally had 11 stools all in a row along a counter directly across from the stovetop. At some point The Spot expanded to include the adjacent space where a few simple tables sit. As for the food… The Spot never served alcohol but still managed to attract lines of UVA students out the door waiting for a stool. Enough said. The hallmark dish was the Gus burger. The Gusburger was a mainstay of The Spot going back at least to 1977 (and probably much further). It was a cheeseburger or double cheeseburger with a fried egg on top. And this was long before the trend of putting eggs on burgers became a common fad.

Everybody wondered what would become of the beloved Spot given the Coronavirus shutdowns. A cramped space like The White Spot was not expected to fare well. But suddenly … Good news! An icon has come to save an icon. UVa and NBA basketball legend Ralph Sampson has teamed with businessman Bert Ellis to buy The White Spot. Best of all, they insist that maintaining the classic look, feel and menu of The Spot is job #1.

Halcyon days. One day in August, 1977 I took my place on the eighth stool from the door at The White Spot. My first time at The Spot. It would not be my last. I’d been lured there by a “townie” student from my dorm who insisted that I had to try the Gusburger. Since a cheeseburger with a fried egg sounded disgusting, we “pre-gamed” with a pitcher or two at The Mousetrap, just down the street. One ensconced on the stool a friendly fellow dressed in all white came up to us with glasses of water. I would learn that this gentleman’s name was Robert Henry. While I never asked any details I was left with the distinct impression that Robert was somewhat intellectually challenged. His only job, besides being eternally happy, was to serve drinks and french fries to the customer base. He was known to many and beloved by all who had the privilege to know him.

Robert walked to and from his home in Crozet along the railroad tracks. One night in 1985 Robert Henry was bludgeoned to death next to those tracks. His murder was never solved. I fervently hope that whoever killed that gentle man is now burning for eternity in the hottest spot hell has to offer. I’ve recently thought that there must be a lot of empty pedestals from statues of now removed Confederate soldiers in The Hook. Maybe a statue of Robert Henry Payne would more than fill one of those empty spaces.

One flew over the sausage gravy. There were only two employee classifications at The Spot — Robert Henry and cooks. No waiters, waitresses or busboys. But the simplicity of The Spot’s organizational chart belied a deep tapestry of stories about the cooks — some probably true, some probably not. Courtesy of my memories and https://www.wspot.net/wspot/#:

More seriously. America was once viewed as a “classless society.” Men of modest means ate, drank and made merry alongside the merchant class and the wealthy. In the 1830s French aristocrat Alxis de Tocqueville wrote about the equality he saw in the new United States. De Tocqueville was astounded at how much equality had become a part of American life. It surprised him to see everyone shaking hands with one another. De Tocqueville marveled about a society where social class did not seem to matter and everyone expected to be treated the same (1).  Much of that equality among the classes has been lost in today’s America. Today, the poor live, work and are entertained in economically segregated neighborhoods. The middle classes do the same in their suburban Levittowns scattered across the U.S. while the wealthy live behind gated committees hob-nobbing at exclusive country clubs.

The White Spot was always, and I hope always will be, a meeting point of people from various economic classes. In my time students mingled with townspeople, rich doctors from the UVa Hospital across the street mingled with working men covered in dust. Intellectual professors traded banter with colorful cooks. One day I sat down to lunch when a working man with dried mud on his pants from his shoes to his waist sat next to me. After asking if I was a student he told me of another student he met at The Spot the other day. He explained, “This student said to me ‘pie are square’; I said ‘no – pie are round, cornbread are square.'”  Forty two years later and I remember that like it was yesterday.

A plea to the real King Ralph (Sampson). Please bring back the pinto beans. For all that is holy, please bring them back home to The Spot.

(1) When de Tocqueville wrote of economic equality he wrote only of the equality among white men. He explicitly discussed the inequality of Blacks (the vast majority of whom were enslaved at the time), Native Americans and women.