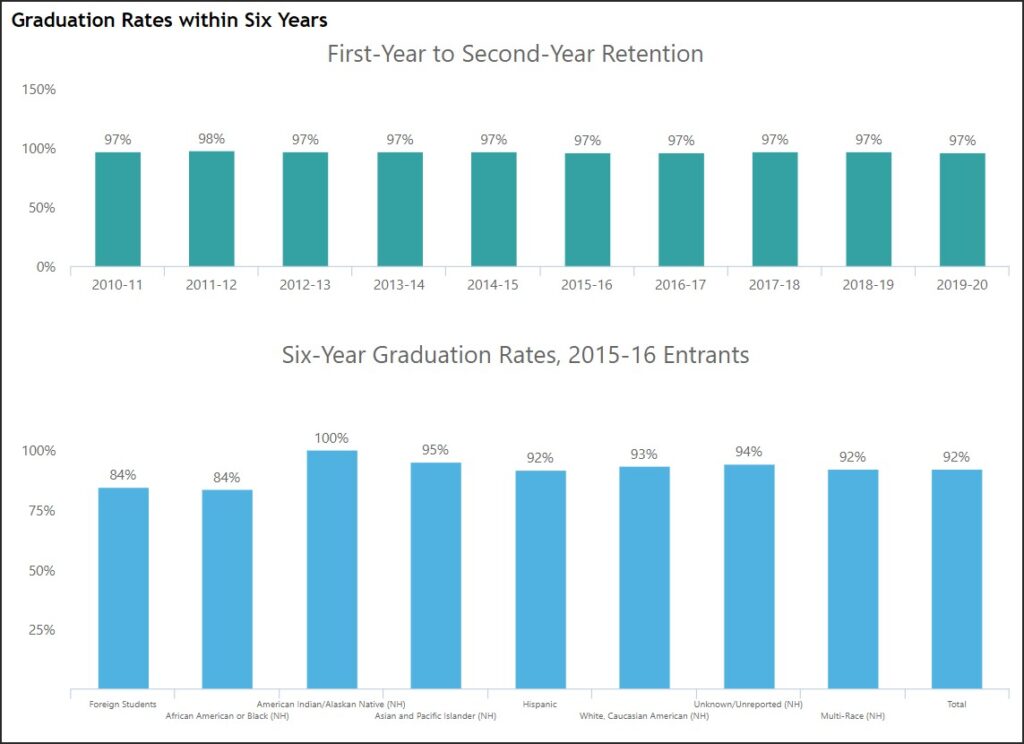 The University of Virginia has the highest graduation rate of any public university in the country, a record it can be proud of. Some analysts contend, however, that UVa’s exception performance can be attributed to the fact that it admits a lower percentage of students from low-income families, who are at higher risk of dropping out. Others counter that UVa’s emphasis on merit-based admissions is appropriate for Virginia’s flagship university. It is too early yet to tell if recent changes in UVa admissions policies, such as dropping the requirement to submit SAT scores, will impact graduation rates.

The State Council of Higher Education for Virginia (SCHEV) publishes a breakdown of six-year graduation rates by race/ethnicity for the 2015 entering class (seen above). Though small in number, students who identified as American Indian scored a stellar 100% graduation rate. Among major groups, Asians performed the best, with a 95% graduation rate. Whites followed with a 93% rate, and Hispanics close behind with a 92% rate. By contrast, only 84% of Blacks graduated.

The lower graduation for Blacks at UVa should be a source of concern.

While the administration touts the fact that the university meets 100% of the financial aid students require, one might ask if that sum is enough. In particular, are Black students more likely than others to stress about meeting basic needs such as housing and food? Alternatively, are Black students more likely to struggle academically? Do they have a higher incidence of mental illness? Are they less likely to feel a sense of “belonging,” or on the flip side, are they more likely to feel alienated from their institution and fellow students?

The SCHEV report cited in the previous post explores some of these issues but not all. That report, which was compiled with input from university administrators across Virginia’s public higher-ed system, likely reflects the thinking of UVa administrators as well — including their blind spots. For all the talk about conducting “brave,” “courageous,” and “candid” dialogues about race at UVa, some topics just aren’t talked about.

After the tragedy of the Nov. 13 triple murder, in which the alleged perpetrator, a young Black man, showed signs of alienation and mental illness, the university would be well advised to take an honest look at the special challenges Black students face at UVa.

I disagree that any one characteristic (gender, ethnicity, race, etc.) should drive concern. All students should be supported equally. All students should be admitted on the same basis of merit. How a student chooses to “belong” or find their “tribe” is up to the student. It is not up to the administration to assume group dynamics based on immutable characteristics. For instance, all the engineering majors may naturally find each other most supportive. Individuals tend to find what they need to thrive.
The best thing any university can do is set admission requirements so they know their candidates are equipped for success. It’s unfortunate that so many have become hedge funds with classrooms, rather than institutions of higher learning.

Questions. Do the statistics track what happened to the “did not graduate within” whatever years cohort? Do those stats account for those who transferred to (and may have graduated from) a different college? I believe the numbers of students who transfer from one college to another must be much higher now than a generation ago. Most of those folks graduate, I suspect.

So the point of the analysis was to actually tear apart UVA’s good record and dismiss it as some sort of detriment based on boxes checked by the Woke?

High graduate rates could be the result of widespread awards of the “gentleman’s C,” a true UVA tradition.

With grade inflation, what do they call that these days? The Gentlemen’s B?

Does anyone call himself a gentleman anymore?

Good point! Dropping out is no longer primarily because of flunking out. Poorly prepared students don’t have to flunk out to leave — just get so frustrated and turned off that some other opportunity/situation lures them off-Grounds.

A key for many in developing a sense of “belonging” is joining a fraternity or sorority. Every single member of my fraternity took his degree, and all but one in the standard-time alloted.
But, The Univertsity is doing everything it can to dissuade students from Greek life (at least fraternities) and make “frat boys” out to be the enemy and unsupported.