UVa and Tech — Less Intolerant than Other Elite Universities

I have been critical of Virginia’s colleges and universities, especially the University of Virginia, for the intolerance of conservative political and cultural viewpoints. But there’s another side to the story, and I believe in presenting all the evidence, not just the facts that fit my narrative. By the standards of other elite U.S universities — admittedly an extraordinarily low bar — UVa and Virginia Tech are less intolerant of diverse viewpoints than most.

Indeed in the College Free Speech Rankings based on a survey of 20,000 college students at 55 top universities, the University of Virginia scored 6th and Virginia Tech scored 8th for freedom of speech and expression. Both fell far short of the University of Chicago, which sets the gold standard, but they far exceeded Ivy League institutions like Princeton, Harvard and Dartmouth.

Jim Sherlock has already taken a bite of this apple here. I’m circling back for a second look at the data generated by the rankings, a joint project of College Pulse, the Foundation for Individual Rights in Education (FIRE) and RealClear Education. First the scores, then an explanation of how they were derived, and then a deep dive into the data.

For purposes of comparison, the table above displays data for the No. 1 ranked institution, the University of Chicago, and the bottom-ranked, DePauw, side by side with the UVa and Tech scores.

The overall score represents a composite of the following categories:

The survey sampled 421 students at the University of Virginia and 395 at Virginia Tech. The margin for error was plus or minus four percentage points at each institution.

Here is how the results broke down for various questions asked. 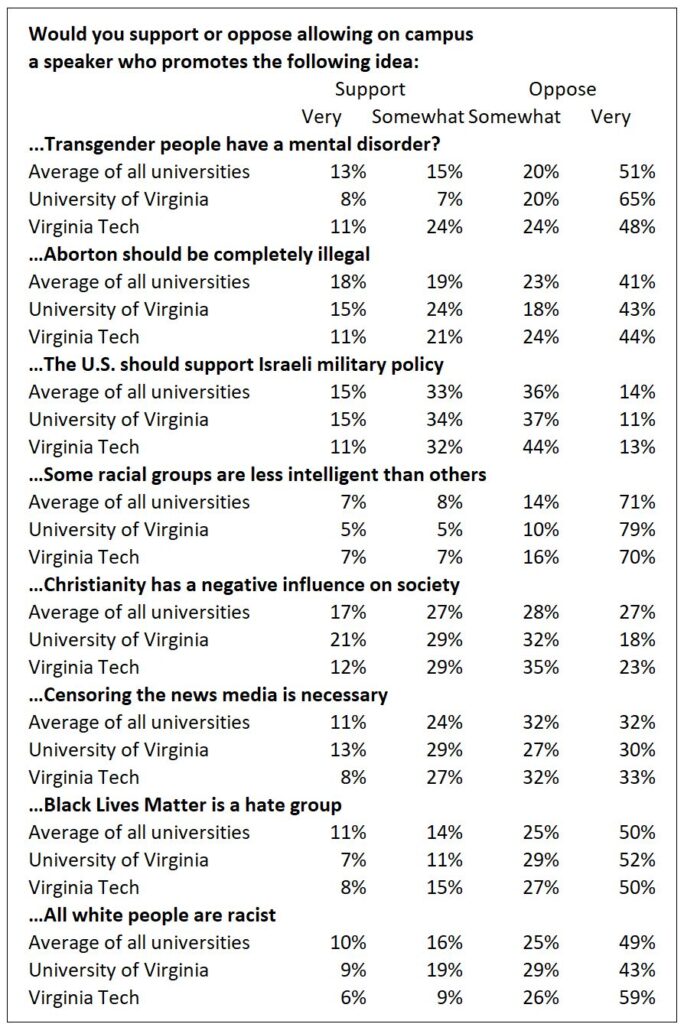 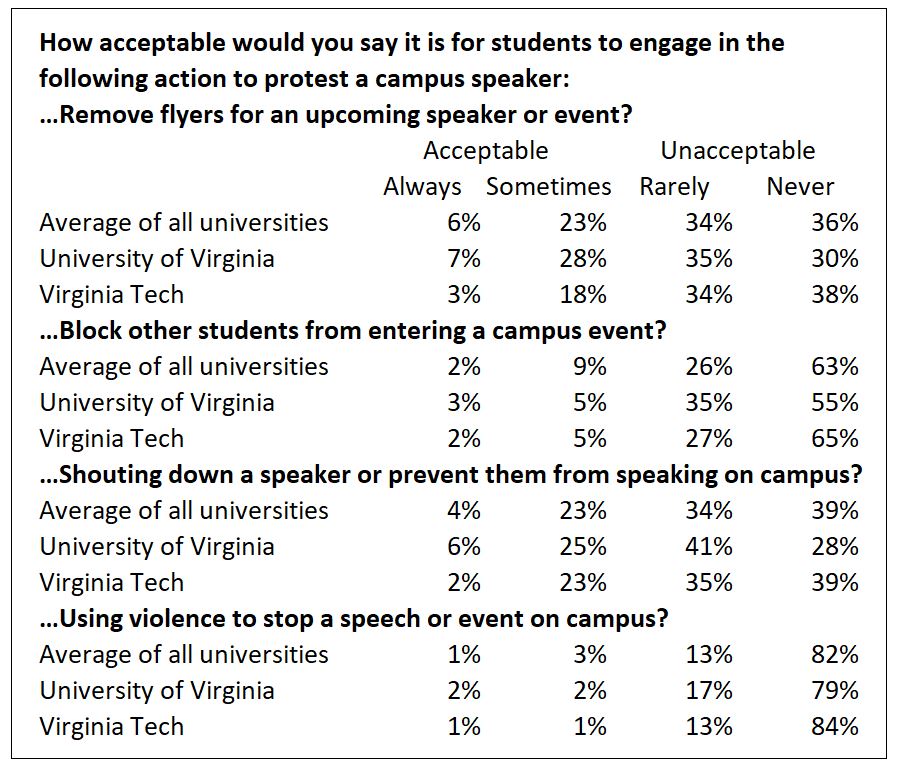 The first set of questions reveals a disturbing trend across all campuses: a widespread unwillingness to allow on campus speakers with unpopular views. The question didn’t ask if students approved of such views, or if they were interested in hearing a speaker with such views, but whether speakers with such views should be allowed on campus. In comparison to society as a whole, America’s elite colleges are not very tolerant places.

In comparison to other elite colleges, however, it seems fair to say, UVa and Virginia Tech are less bad than the others.

An important caveat: The survey questions gauge the perceptions of students, not faculty or administrators, so they are only one metric for gauging how open and tolerant an institution is. The free speech environment is influenced also by faculty members and what they teach as well as administrators and the rules they enforce. Perhaps one day FIRE will undertake a survey of those groups as well.

A final comment: In seemingly good news for conservatives at UVa, the university was ranked higher by students describing themselves as conservative than by liberals: a 57.6 score compared to 55.0. (Virginia Tech conservatives gave higher scores than liberals by a comparable margin.) But the qualitative data — comments submitted by students — portrays an environment greatly at odds with the scores, which calls into question the validity of the methodology.

Here follows a sampling of comments from (mostly) conservative UVa students. They weren’t the only ones to say they felt uncomfortable expressing their views, but they far outnumbered the others who weighed in.

I have had at least one professor each semester I have been on campus express their political opinion (and it is always liberal in my experience), and they always seem to have the general support of the classroom. I always feel extremely uncomfortable in these settings, because I have never felt in agreement with the statement the professor makes, and I always feel as though if I said something it would put a target on my back as a republican. I have never felt comfortable expressing my political opinion to professors or other students who are very liberal in any setting, classroom or private, because it feels unacceptable socially to not be liberal on grounds.

One time on campus, a group of black students confronted a conservative group, YAF, about a video their national organization posted with a caption criticizing the person in the video. The person in the video was a black female student talking to white students in the Multicultural center and saying that there were too many of them and they should think about the space they’re taking. The video was recorded by an acquaintance of hers and reposted by YAF. I am and never have been a part of either group. YAF held a tabling event where they offered to answer any question and give a cookie to the asker. I approached, for the cookie, and to mess with, what some might call troll, the people at the YAF table. Some time later, a group of black students came by and some of the members talked with the YAF tablers expressing their displeasure with the video. Others, however, lobbed negative and racial language at the students of YAF who were white and a member stole much of YAF’s literature and material, as well as their sign. I was very uncomfortable as I feared I would be associated with YAF just for proximity to the table and also feared saying something about the theft due to social consequences and even physical. One member also attempted to move a YAF member’s personal phone. The group was agitated and outnumber the YAF people 8 to 1, so I was worried I would be lambasted if I spoke up.

I am a 21 year old male student at UVA who took a Women & Gender Studies class that was focused on sexual violence and social injustice. A lot of the class was centered around mental health and helping women and abused social groups, but a large proportion of the class was very negative towards heterosexual, white men. … I felt that as a man, I didn’t have the ability to present my thoughts or feelings without being judged against.

I find that in classes where politics may be present, the conservative viewpoint is rarely discussed or acknowledged. I myself identify as a liberal, but I come from a very conservative region. In an African American Studies class, for instance, I felt uncomfortable simply sharing my perspective for fear that I would be accused of being racist and hateful.

I hear a lot of students say that hate speech should be banned despite it being a constitutional right. Even though I think hate speech is wrong and unnecessary, you can not decide what is and not allowed under the first amendment to satisfy your biased opinion. It is an unpopular opinion and at a school where most people are very liberal, they will eat you alive for disagreeing with them.

I feel that a large percentage of members of the UVA community are liberal/have liberal views regarding many controversial topics, and as someone who has multiple conservative views on these issues, there are many times that I have felt extremely uncomfortable about expressing my own personal views. While I believe everyone has a right to express their own opinions and respect their liberal-leaning views, I don’t feel as if I would receive the same treatment by students or professors.

In college, there are a lot of radical ideas that appeal to many college aged people, and when they’re spoken about in class/hallways/around Grounds it can make me uncomfortable if I don’t agree with it. I don’t want to be hated for having a different opinion, and I respect their opinion so I don’t mean ill will towards those people either. However, it’s just so much easier to survive either pretending you agree or not saying anything at all.

Although I consider myself very liberal, I find that I it is sometimes difficult to be honest about how I feel about actual reparations that are happening at the university. For example, in my ‘Slavery at the University’ course, there were many times where I felt that I could not voice my opinion about what the university was doing right/wrong because there is a stigma around the students that the university will never get it right.

In a giant lecture, the professor often stated his own liberal beliefs as facts not opinions. While I agreed with most of his opinions, I didn’t agree with all of them and I could see how it would be uncomfortable for someone with opposing opinions to be in a class in which the professor forced us into taking on his own beliefs, especially when we were tested on them.

I believe certain things about sexuality as a result of my religious beliefs. Although I would never seek to offend someone or attack anyone in the LGBTQ+ community, and believe that we should all seek to love one another regardless of gender, I did not feel comfortable sharing my opinion on the morality of same-sex marriage and other issues in a sociology class.

Many times people have used backhanded comments to bash the president, and at times I have to sit through it because I know if I express my opinion, I’ll receive the same kind of hate speech/verbal attack. I could take it, but I don’t want to be ostracized for supporting a public figure.

My very left leaning friends would constantly criticize me for my stance on pro life. Although I have considered my self left leaning as well except on some issues, I found it very hard to express some of my none liberal beliefs for they were immediately labeled “racist”, “bigoted”, “full of hate”, etc.

Once I did express an opinion of mine with a group of friends significantly more liberal than myself. I am neither liberal nor conservative, I take independent viewpoints on most issues and occasionally agree with one party or the other. As a result of the opinion I expressed, which was mundane and not offensive, my group of friends ejected me from their group.