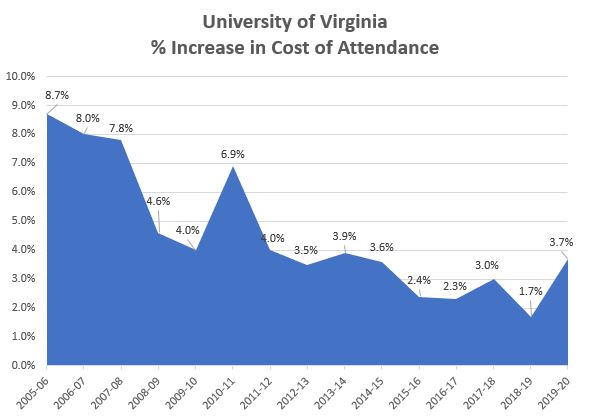 The University of Virginia Board of Visitors is considering raising in-state undergraduate tuition up to 3.1% next year and hiking student fees by $114. The increases potentially would add $554 to tuition and fees next year, bringing the total to $17,860, reports the Daily Progress. Including room, board, books and other expenses, the total cost of attendance would reach $34,600 for students not benefiting from financial aid. Out-of-state students would pay $70,200 all told.

Rector James B. Murray cited the impact of the COVID-19 epidemic. “2020 has been a tough year for everybody, for the students, parents and the administration. It’s been a financially troubling year and psychologically troubling year. We have lost a lot of revenue. We don’t have housing revenue, dining revenue, athletics, or student and public services. … The board is committed to keeping tuition increases at a minimum and using every other source of revenue whenever and where ever we can.”

Said Murray: “Tuition is always the last lever that we pull.”

Third-year student Madison Perry, one of two dozen students allowed to speak in the board’s first-ever open comment session, had a devastating come-back.

“Something really stuck out to me in Mr. Murray’s opening address to the board; tuition is the last lever that the board wants to pull,” she said. “Obviously, I’m assuming good faith here, but why do you pull it every year? Why has tuition gone up every year for decades now?”

It turns out that COVID has set back students financially, too. Perry said she lost her job in the restaurant industry. She found new work, but a parent’s illness has made her education a burden on her family, so she has taken out private loans to pay her expenses.

Levi Schult, a fourth-year astrophysics major, said he and most of his friends had lost their jobs due to the pandemic. Because he has a car, he was able to find work doing deliveries, but now he feels at higher risk for contracting COVID-19.

The exact tuition increase for 2021-22 won’t be known until the General Assembly enacts its budget and decides how much state aid it will provide UVa, Murray said.

Here is a useful perspective for understanding UVa (and most other public and private universities): The university  is a mechanism for extracting wealth from students, their families and, to a decreasing extent, taxpayers for the benefit of faculty and, above all else, an oligarchy of highly compensated administrators. Driven by the quest for prestige, the administration has endless ideas for spending money on initiatives of ever-diminishing educational utility. With little appetite for cutting programs or expenses, the UVa board increases expenses as much as the political environment and higher-ed marketplace will bear. Year after year after year.