UVa Grade Inflation Has Accelerated Since 2018 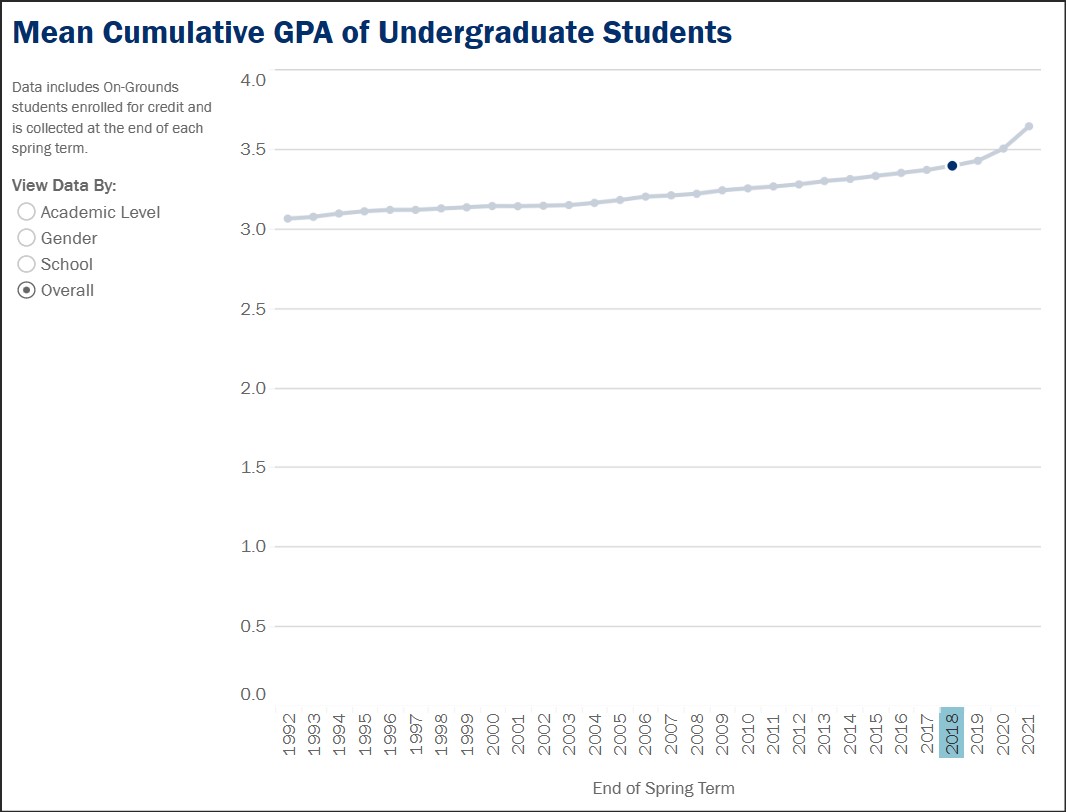 In the spring of 1992, the cumulative Grade Point Average (GPA) of University of Virginia undergraduate students was 3.1, according to data maintained by the office of Institutional Research and Analysis. By 2021, the average GPA had soared to 3.6.

Grade inflation is a national phenomenon in U.S. higher education, so there may be nothing unusual about the long-term trend at UVa.

What does stand out in the chart is how grade inflation has accelerated in the past few years. The dot in the graph represents 2018, the year Jim Ryan became president. The average GPA that year was 3.4. Within three years, it shot up to 3.6. Viewing the UVa data in isolation, however, cannot tell us whether that incipient hockey stick is unique to the University or common to higher-ed nationally.

An average of 3.6 implies that at least 60% of all grades are As — and that assumes that the rest are Bs. If we assume that students occasionally are assigned Cs or Ds, the percentage of As is likely even higher. It would be interesting to see the grade distributions. Unfortunately, UVa does not provide that information. Still, based on the data made public, one must wonder, does anyone ever receive a failing grade anymore?

Inquiring minds in the Board of Visitors might wish to know which is the case. And if standards are lower than in the past, what factors are driving the trend?

The Institutional Research and Analysis website provides a breakdown of the data that yields a few meager clues into what is going on. 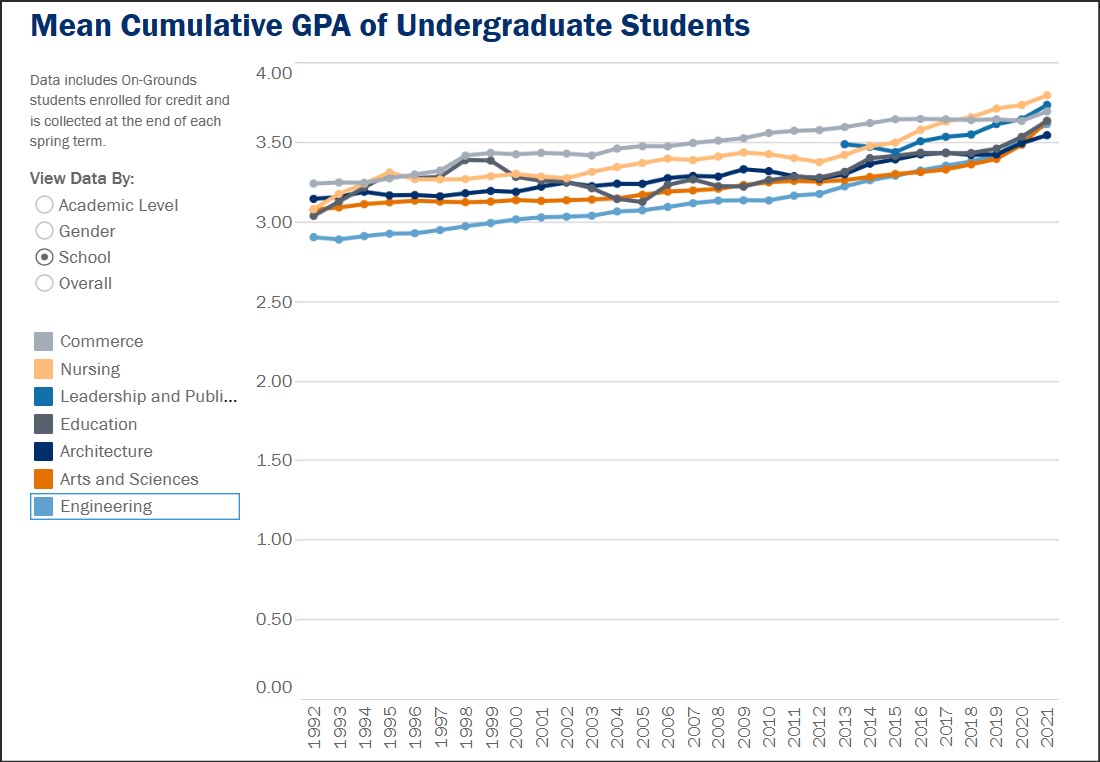 Grade inflation applies to all the undergraduate schools. The median GPA was highest in the nursing school at 3.8 in 2021. The most rigorous (or least un-rigorous) was Architecture at 3.5.

The engineering school, known as the toughest program in the school when I was there a half century ago, has seen the biggest increase in median GPA — from 2.9 in 1992 to 3.6 in 2021. 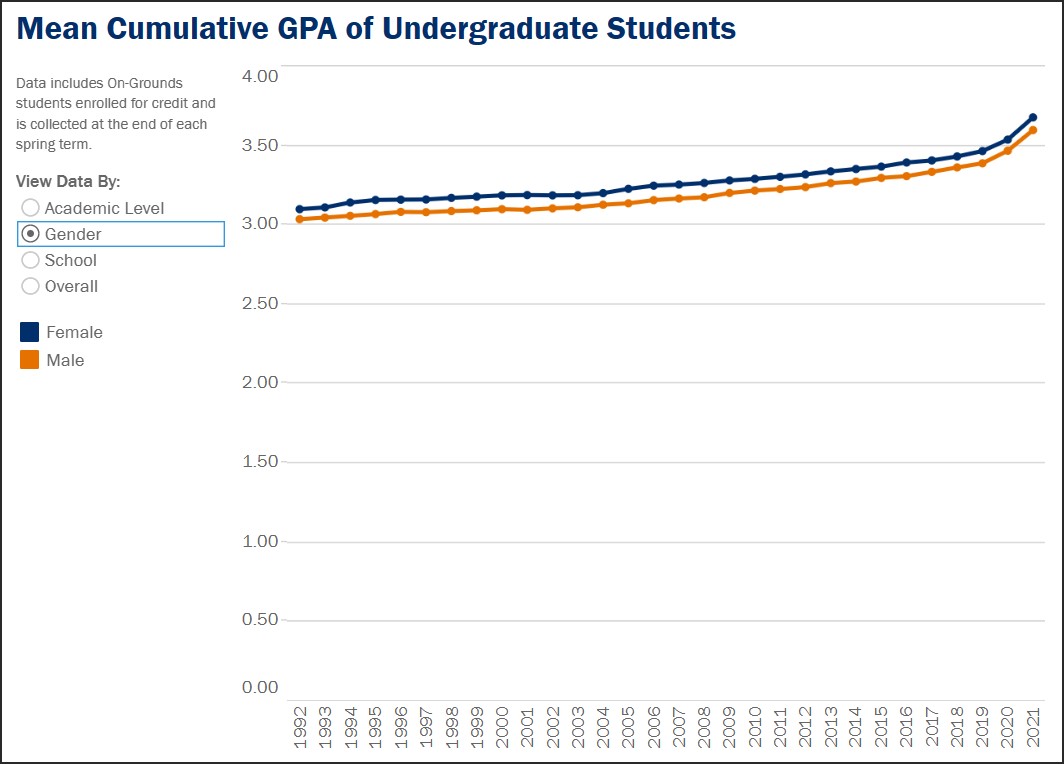 Traditionally, women have earned slightly higher grades on average than men. The margin of roughly 0.1 percent hasn’t changed. But the trend line toward higher GPAs for both sexes has moved in lockstep.

UVa does not break down median GPAs by race/ethnicity.

Conclusion: whatever factors are driving grade inflation, they apply across all disciplines, and they apply equally to men and women alike.

Excellent article. We all know the answer is trophies not disparate student excellence. UVA has done away with SAT’s which were the only objective criterion to distinguish letter and numerical grades among the tens of thousands of high schools across America.

All A’s are not created equal.

Feelings and relentlessly focusing on previous perceived aggrievements mean more at UVA than objectively judging students on merit based academic results. God forbid a 3.6 GPA graduate who should have been a 2.5 takes a job in sales where you make or exceed annual budgets or are fired. Feelings only go so far in the real world. Only hard core results create profits, fund job growth and product development, and create economic success.

Good luck boys and girls when you start reporting to managers who hold you accountable and no longer suggest you have a couple hours with a puppy when you are having a tough day.

These universities are going to destroy their own racket. The world knows college grades are not an indicator of quality. I believe the avg GPA at Harvard is 3.8. They used to justify the inflation on ground that “no one at Harvard, UVA, etc. does ‘C’ quality work.” Employers could accept that due to the difficulty of getting admitted. Now, the schools have eliminated admission standards in favor of skin color and criteria that do not predict or contribute to success. It will take time for it to unwind fully, but already employers who actually require capability are finding they cannot rely on the academic credential to signal ability. They are administering their own tests and establishing their own certifications. If the universities do not take steps to shore up their brands, they are going to become useless to anyone who needs a credential that actually conveys talent.

Speaking of skin…….the poor sheep which sacrificed his so that I could display a diploma that meant something must be embarrassed by its devaluation.

Just like our degrees!
The silence of UVA Law with all the civil rights and other normative violations against Trump and his supporters and in the vax mandate appalls me. Not one lawyer in the whole school had any issue with any of it?
A far cry from when I went…

A good article. As a side note during COVID I believe the university implemented a pass/fail option similar to what they did after the shooting. I disagree with the policy in that anyone after the fact can engineer a 4.0 GPA. Only by reviewing transcripts will you see the number of pass fail options chosen.

This is not, as pointed out, an issue unique to UVA. Sadly our children have even in middle and high school to be taught that anything below a B grade indicates failure rather than that a C grade means you have reached a minimum level of proficiency. I am not saying one should strive for a C but in the real world on the job I doubt ALL students will excel at everything they tackle. Where will their resilience be when they flub a work assignment and have to face their superior? Will they be able to pick themselves up, problem solve and learn from the moment? The professors I remember most fondly are the ones who cared enough to make me work for my grades. How will DEI objectives affect quality of our professors and the rigor of coursework? Will that A grade today be equal to the past?

Farewell, the gentleman’s C and farewell the long standing UVA tradition of grades “earned and not given.” Is it no surprise now once again that when you allow leftist “progressives” to be in charge they inevitably destroy everything that is good and admirable? They are and always have been a plague on our country.
To get an overall and more clear picture of the effect of grade inflation at UVA, it would be helpful to follow up this article with one focused on grad. school standardized test scores for UVA students, whether it be GRE, MCAT, DAT, LSAT, etc. That would give a perspective as to how well current UVA students are actually learning even in the face of grade inflation. But alas, I wonder if grad schools are doing away with those tests also as to admissions in their insane march towards wokeness.

Unfortunately, this starts earlier in the high schools. “No one left behind” has created multiple ways and “extra credits” to raise any failing grade. For these students the bell curve is too traumatizing, as is knowing a class ranking