UVa Rules Out a “Pattern” of Hate Crimes 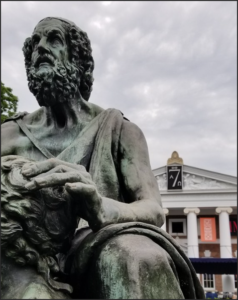 University of Virginia executive leadership has issued a remarkable statement that lends insight into the fraught state of race relations at Virginia’s flagship university. Three recent incidents have taken place on the grounds since the new academic year began that have “caused some to speculate that they are linked or part of a larger pattern of racially motived crimes,” said J.J. Wagner Davis, chief operating officer, and Tim Longo, chief of university police.

One incident involved a White man hanging a noose around the neck of the Greek poet Homer, an act of ambiguous meaning that President Jim Ryan promptly branded as a hate crime. The Davis-Longo statement made it clear, however, that two other matters — a report of someone throwing rocks through the window of the Office of African-American Affairs, and the discovery of a flag bearing a strange symbol lying on the grass near the Memorial to Enslaved Laborers — have been determined not to be hate crimes.

“President Ryan has asked us to provide this community with an update and to make as clear as we can: These incidents are not linked, and two of the three were not racially motivated at all,” the statement read.

The series of incidents has roiled the UVa community. As the statement notes, Ryan and other senior University officials have “spoken with many students, faculty and alumni” about efforts to get to the bottom of the events.

In the first of the three incidents, someone threw rocks through at the building that houses the Office for African American Affairs (OAAA), breaking two windows.

The National Association for the Advancement of Colored People at U.Va. issued the following statement: “The NAACP at UVA condemns the recent vandalism and property damage inflicted at Dawson’s Row on August, 19th. … As more information in regards to this incident comes to light, let us also acknowledge the home and stability that The Office of African-American Affairs has provided us as Black students here at this university. … No stone thrown with malice will knock down the empire and strength the Office of African American Affairs has created. … Amid these challenging times, we stand by OAAA, we stand together, and we stand in power.”

University police undertook an investigation of the event and quickly ruled out any notion that the stone was thrown out of racial malice. Rather, the perpetrator “was a student who was known to OAAA officials and who was motivated by factors unrelated to racial bias.” The stone thrower was charged with the act of vandalism, a misdemeanor offense, but federal privacy laws forbade the university from divulging the student’s identity.

In the most recent incident, which occurred last weekend, someone reported that a flag bearing a symbol that looked either like a crown or an owl, depending upon how it was viewed, was left on the grass near the Memorial to Enslaved Laborers. The same person also left a check for $888.88, which was delivered to a student’s room. The check bore the same symbol as the flag.

“As rumors swirled around this bizarre set of events, some speculated that the flag represented a white supremacist organization and that the check was somehow a targeted act of intimidation against a student of color,” said the Davis-Longo statement.

The University Police brought in the FBI to investigate. The individual responsible was identified as an alumnus. “We discovered that he is part of an organization focusing on micro-philanthropy that occasionally engages in random acts of kindness to current students,” said the statement. The owl on the flag and check stood for “Wise Investment Philosophy.” The site near the Memorial for Enslaved Laborers was chosen “as a sign of respect.”

Davis and Longo also provided an update on what has become an FBI investigation into the noose incident, which, their statement said, “has been determined to be a hate crime.” Offering a $2,000 reward to anyone providing information that will help solve the crime, authorities have posted grainy photographs of the individual who placed the noose on the statue as well as a car they believe he drove. 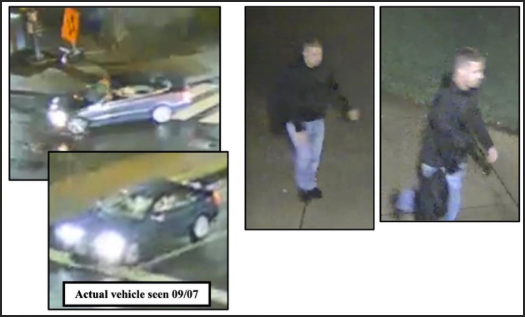 The photograph of the automobile provides a hint. It looks very much like a Mercedes convertible I once owned — an expensive vehicle (less expensive if you bought it used at Circuit City like I did). Whatever the make and model, it is not a pickup truck or beat-up Bubba-mobile that one thinks of White supremacists as driving.

The statement also reveals that “documents” were recovered near the Homer statue.

We have been reluctant to say much about these documents, not out of a desire to withhold information (much less to withhold threatening information), but because releasing information about what was found might compromise the integrity of the investigation. Because of the anxiety around Grounds, however, we want to let all of you know that one document found at the scene was a flyer that advertised a student-led social event that had already transpired and was completely unrelated to this incident. Another document recovered was marked with the phrase “TICK TOCK.”

Investigators are still seeking to determine the relevance and relationship between that document and the placement of the noose, as well as the potential significance of the phrase on the document. Because the investigation is ongoing, we are unable to reveal anything more at this time, except to say, again, that nothing recovered at the scene conveys a specific threat to public safety.

The significance of these documents is hard for the public to ascertain. Investigators have not provided images of them, nor explained why they think they might have been associated with the noose. For all anyone knows, they could have been random litter.

Having tamped down rumors of a “visible trend” of hate crimes at UVa, however, Davis and Longo went on to reaffirm UVa’s commitment to racial justice. “That does not mean that members of our community never experience intolerance and discrimination here or anywhere else because of their race. We have placed, and will continue to place, great emphasis on making UVA more diverse, more equitable, and more inclusive to people from every walk of life.”

Bacon’s bottom line: At one of the most politically “progressive” institutions in Virginia — a place where the faculty donates to Democratic candidates by 20-to-one margins and the liberal/conservative ratio of students runs 2.7 to 1, a place where an anonymous philanthropist in an act of random kindness handed out an $888.88 check to an African-American student — African Americans feel under siege from omnipresent racism. What does that tell you?

Thanks very much for this informative update.

A faculty which donates to either major political party at a ratio of 20 to 1 lacks diversity. And the administration should attempt to hire qualified new faculty members who would expose the student body to alternative schools of thought.

I tells me the racial identity activists do not have actual problems to address. Human immune systems sometimes react similarly hysterically when bereft of something useful to do.

The grownups are responsible – those who knowingly benefit from keeping young black men and women in a state of fear, and those who may not benefit but who lack the courage to counsel them to be more rational.

It shows a lack of respect: treating black students as if they are too fragile to hear the truth. They are not being oppressed or hunted at UVA. They have been given a great gift, usually at the expense of a more qualified, non-minority student. They are wanted. Everyone is praying for their success. And they should busy themselves making the most of it.

The rush to judgment by U.Va. administrations (Theresa Sullivan and the false Rolling Stone story) and jumping to
conclusions of systematic racial incidents presently reveal
their bias. Please take a deep breath and at least do a cursory
investigation and use reason rather than resorting to needless fear-mongering and sanctimonious posing. Thank you.

as a 1968 Graduate of The University majoring in Sociology and Aanthropology I find that President Ryan and others have jumped to conclusion that any such actions are automatically hate crimes.The University along with other leading institutions have become to Woke and listen to any group that screams of an alleged abuse.This is also true among the Social Sciences.That is why my funds go elsewhere !

It is clearly apparent that persons of color as well as the progressive left will use any excuse to call any act on campus a hate crime so as to gain political advantage and additional funding for themselves. Just as with the boy who cried wolf….they need to be ignored.

Sounds like someone has upped the ante on the Seven Society. Now there’s an Eight Society?

So what we’re being told is that black students are smashing their vandalizing their own monuments to make it appear they are victims of racial attacks? That’s pretty low. They should have their race cards revoked.