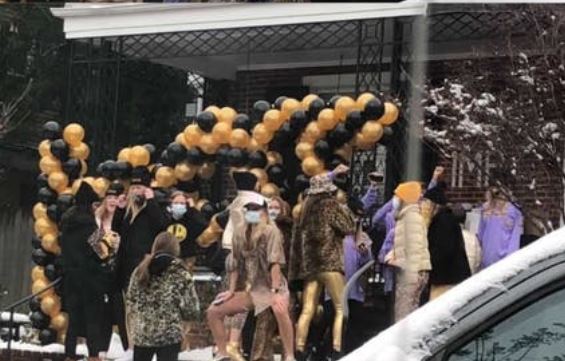 COVID-19 infections may have been trending down in Virginia for almost two months now, but they spiked at the University of Virginia several days ago, and the Ryan administration imposed tough new rules to curtail the spread. Not surprisingly, many students have violated the restrictions. In so doing, they have sparked a backlash that appears to be directed not at rule breakers generally but at offenses associated with fraternity and sorority activity.

Under the new COVID regime, in-person attendance at classes are allowed, but social gatherings are not. Students are allowed to walk to and from classes, work, dining or medical care, but otherwise told to isolate themselves. Inevitably, questions arose in the interpretations of the rules, and the Dean of Students clarified that two students could walk together, but they must wear masks and stay six feet apart.

Needless to say, fraternity and sorority parties are not allowed.

The Cavalier Daily, the university’s student-run newspaper, published an article February 20 revealing that University had brought cases against a number of individuals and fraternities for COVID-19 violations. The early days of the new semester at UVa traditionally are marked by spring “rush” in which potential recruits visit a series of Greek organizations. The rush this year was subdued. Still, the newspaper published photos of parties with people ignoring the requirements to wear masks and practice social distancing.

In one instance, published in the Cavalier Daily and shown in the photo atop this post, revelers gathered outside the Kappa Alpha Theta house for about 20 minutes. Although some women were wearing masks, many were not. In another incident, a group of men gathered at the Pi Kappa Phi fraternity and drank beer, as shown in this photo. Most partiers were not wearing masks.

The Cavalier Daily said it was investigating at least eight other Greek organizations “for alleged violations of public health guidelines during the first two-and-a-half weeks of the spring semester.”

At an online town hall meeting the previous day, UVa President Jim Ryan said the spike in COVID cases was the result of many small gatherings both on and off the grounds, not one major super-spreader event. And a previous email to the university community stated that there was no evidence that in-person components of Greek life were primarily responsible for the increase of cases.

But University authorities are keeping a close eye on the frats. The University Police Department and the Ambassadors, a group of student volunteers, were enlisted to monitor activity at Rugby Road frat houses and the Corner, a retail-restaurant strip adjacent to the university. Of the cases tracked by the administration, about 25% involved students on the Grounds, and 75% off grounds.

The university crackdown on the virus seems to be having an effect. As of Feb. 25, the seven-day moving average of the COVID positivity rate among university students taking the test was 3.04% — considerably lower than the rate for the 8.0% rate for Virginia as a whole, and lower than the 4.5% rate for the Blue Ridge health district. At the same time, students are suffering few ill effects from contracting the virus. At the Feb. 19 town hall, Department of Medicine Chair Mitch Rosner said no students have developed serious illnesses or required hospitalization.

Indeed, students are likely to suffer more severe effects from social isolation than from the disease. Bacon’s Rebellion has viewed emails from parents of students who shared their experiences anonymously.

My son came home mid October because the restrictions were so unreasonable and he was facing disciplinary measures for not having his mask on while talking to our family at night by himself outside. When he arrived home, he was unrecognizable to the young man who left in August — he’d lost about 15 lbs. … [He] couldn’t get out of bed, depressed that he had let himself and his family down somehow by not staying. … He chose not to return to school this Spring and is not doing remote because getting a degree from UVA using zoom is not at all what we signed up for.

My freshman daughter is an absolute wreck as a result of this. She is currently on Covid probation for very minor offenses of entering another dorm room and and has been put into hotel quarantine twice for a total of 21 days. The disruption wreaks havoc on her life. … What a horrible experience this has been for her freshman year of college.

We have 2 children at UVA, a 4th Year and a 1st Year. They both have struggled severely with anxiety and depression this year. Both have been in counseling since the start of the year. … They both are suffering acutely from the social isolation. My first year, in particular, is lonely with a very limited circle to socialize and eat with, despite being active in several virtual campus activities and working on a campus job. The counseling has been helpful, but it is difficult due to the over-burdened resources. One of my Hoo’s said to me “I don’t know how long I can take it. I can’t meet people. I often have no one to eat with, study with, or be with. We were yelled at leaving the dining hall because we paused in the entryway of the dining hall to zip up our coats. The constant fear of being sent to quarantine due to being a close contact, even when obeying all the rules, is debilitating. … Every day is exactly the same as the last, with no hope in sight.

The basic human need for social contact hasn’t stopped some segments of the student body from expressing their ire at fraternities. One Cavalier Daily editor, “humor” editor Eshaan Sarup, was particularly aggressive. He tweeted out photos of fraternity gatherings in violation of the university guidelines. Here is some of his Twitter commentary: 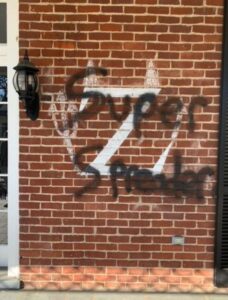 Apparently, Sarup was not alone in blaming fraternities. The photo at right shows graffiti sprayed on the wall of the Beta house.

Alumnus Rick Jones picked up bad vibes from university officials while listening to a Zoom meeting of the Fraternity Alumni Council. In a widely shared email, he quoted Interfraternity Council President (IFC) Andy Huffman as saying that he feels “a palpable sense of anger” when walking along Rugby Road, where most fraternity houses are located.

The IFC has received 12 credible complaints and evidence of violations of the University’s lock down rule. Among specific examples of violations, he specifically mentioned “gathering around a campfire” — possibly referring to KA’s outdoor fire pit. Other activities involved activities relating to pledging. Reported Jones: “One Ambassador stopped two men and asked them what they were doing out – they replied that they had been called up by a brother and told to bring him a takeout meal from somewhere.”

Dean of Students Allen Groves referred to the COVID violations as an “existential threat” to the fraternity system” that is not going to be ignored.” The administration is under fire for allowing rush in the first place.

“I have heard the complaints of ‘white privilege’ which seems to be a popular rallying point,” wrote Jones. “The basic bad part of all this, and I hate to say it, is that a lot of fraternities have clearly violated strict, serious rules that were implemented to quell a sudden spike in positives, and a lot of houses ignored them, are getting caught, and this is causing an enormous backlash not only by people who hate fraternities and white people but many others.”