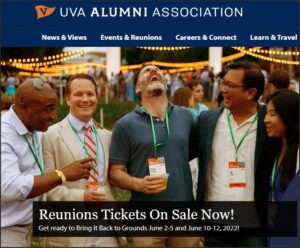 Who owns the University of Virginia? The answer is clear: As an agency of the state government, UVa is owned by the citizens of Virginia. The governor appoints the members of its governing board, the University of Virginia, the General Assembly allots a significant percentage of its budget, and, although it has been granted considerable autonomy, the university must abide by state rules and regulations, such as, to mention just one, the Freedom of Information Act.

But who owns the University of Virginia alumni association — a nonprofit entity that, according to its Form 990, has $582 million in assets? And what mechanisms exist to hold the association’s leadership accountable for its actions?

The answer to that question is less immediately obvious. After digging into the matter, I’ve reached the conclusion that the alumni association is accountable to no one — certainly not to the UVa alumni. It is run by a self-perpetuating clique, which is free to indulge its decidedly ideological preferences largely uncontested. Transparency is minimal. and most alumni are clueless.

The UVa alumni association is not unique in this regard. My findings likely apply to alumni associations across the country and, indeed, to most nonprofit organizations generally. The story of how unaccountable, tax-advantaged nonprofits exercise extraordinary influence over our society is one of the great untold stories of our age.

Governance. Who controls the money and influence exercised by the UVa alumni association though its alumni events, glossy magazine Virginia, digital news blasts, and dispensation of fund-raising proceeds and endowment revenue?

The alumni association was formed in 1838. According to its charter, “The Association is organized and shall be operated exclusively for charitable, scientific, and educational purposes … to develop, strengthen and utilize the bonds of interest, sympathy, and affection existing between the University of Virginia .. and its alumni, and among the alumni themselves….”

Lily West has been the CEO since 2020. She went undergraduate to the University of North Carolina-Chapel Hill and graduated from UVa’s Darden School of Business in 2012, succeeding Jenifer Andrasko, who had graduated from Darden in 2010 and Duke in 1999. The Board of Managers has 35 members and 5 ex-officio members. The bylaws indicate that 2 or 3 ex-officio members are voting members – one is appointed by the Board of Visitors, one by President Ryan, and one is the head of the Jefferson Scholars if he or she is not already a Manager.

The BOV Board Manual states that the Alumni Association may propose at least three names for each available position on the university Board of Visitors (purely on an advisory basis, as the ultimate selection is the Governor’s prerogative).

As for the Board of Managers of the association itself, the procedure is self-perpetuating. Any alumni can put up someone for nomination through this form, but a Nominating Committee selects a slate of names. The Board of Managers then votes on the new members. There is no alternative pathway to be elected to the Board. There are no mechanisms for dissident alumni to get seats on the board.

Alignment with UVA as a “University Associated Organization.” In 2019, UVA updated its policy on University Associated Organizations. Essentially, all foundations maintained for the ultimate benefit of UVA or one of its schools have entered into a “Memorandum of Understanding” similar to the one attached for the Alumni Association, which also incorporates the 2019 “policy” as an exhibit.

There is much to commend the granting of UAO status, particularly with respect to the coordinated, efficient raising of money. There is a downside, however. The MOUs require UAO boards to have a BOV representative and a President’s representative as voting members, and that those members have “meaningful participation” in the governance of the UAO.

Answering Alumni Concerns. The main page of the Alumni Association posts all all sorts of news and events, but is it aligned with its alumni-service mission or with the Jim Ryan administration? Given alumni service as the raison d’etre of the alumni association, one might think that some deliberations of the organization would be transparent to alumni.

I wanted to know how the Alumni Association made recommendations to the Governor for the university’s Board of Visitors slots beginning July 1 and whom it had recommended over the last two years. I asked Lily West for this info on February 17, 2022, and she responded fairly promptly that the “Executive Committee” made the recommendations. Who served on the Executive Committee? After a series of back and forth communications, she responded that the Executive Committee was comprised of the Chair and Vice Chair of the Board of Managers and the Chair of each committee. Since the website does not show committee assignments, I suggested showing them on the website and revealing to alumni was running their organization.

On February 23, I found out these were the members of the executive committee: Thomas B. Mangas, chair; Katherine A. Moore, vice chair; James G. Aldigé, IV; Whittington W. Clement, BOV Representative; Patricia K. Epps; Brett J. Gallagher; Kurt B. Harrison; Courtney C. Byrd Metz; Marc B. Moyers; M. Paul Nolde; R. Kennon Poteat, III; and Leslie H. Williams, Jr. Ms. West told me that some of the association’s BOV recommendations had been accepted but that she did not have to tell me who they were.

By comparing the current names on the website with past name on the federal 990 forms, I have ascertained that nine people are off and nine new people are on. I see no reason at all for this secrecy.

The Ryan administration and the Board of Visitors express “unequivocal” support for free expression and free inquiry and yammer about saving “our democracy.” But the concepts of democracy, representative government, and transparency play no discernible role in the governance of the alumni association.

Frustrated by the unwillingness of CEO to answer basic questions about governance, I asked under the Freedom of Information Act for minutes of the board and committee meetings over the last three years. UVa denies that the alumni association is subject to FOIA.

I question whether that is true. And if it is, I question whether it should be. If Jim Ryan and the BOV have representatives on the Board of Managers, should not, as a minimum, the minutes of the Board and its committees be an open book? Further, if these University representatives are required to have “meaningful participation” in the Alumni Association and are “stewards of the relationship” empowered “to maintain the integrity” of the Memorandum of Understanding, does not this indicate a measure of UVA control?

Suggestions for Improvement. I am a triple alumnus of UVA. My father graduated from the UVa Law School. I have numerous cousins and uncles and brothers who attended UVA. As far as I know, we all love the school. I was general counsel at a NYSE company and a private-equity backed company which sold in 2019 for over $5 billion. I am well-versed in “good governance” practices. The governance portion of every public corporation’s website lists directors, their terms, their committee assignments and all the relevant corporate documents, including committee charters. While I don’t wish to impose all the public company requirements on the BOV or the UAO foundations, I do think this basic information, as well as links to the 990 forms, should be readily available on the websites.

Further, the FOIA status of the UAOs needs to be determined. If I am correct that UVA controls all of these “separate” entities through the MOUs, then there needs to be accountability and transparency. I would hope University counsel would look into this issue without requiring FOIA litigation. Fourteen billion dollars is too much money to be administered without accountability to alumni and the public.

Mr. Bacon asks reasonable questions which deserve the basic courtesy of an answer.
What is the best way to share this article and Mr. Bacon’s concerns with all members of the Alumni Association?

Thank you for the praise, but Walter Smith deserves credit for this piece.

As for sharing the article with other Wahoo alumni, the alumni email list is not something the association is likely to share with us. All I can suggest is that you email the article to every alumnus you know and suggest they read it. Urge them also to subscribe to the Jefferson Council blog for blog updates, and register as a member of the Council (it’s free… although contributions are appreciated!)

Walter, this article is a tour de force. Thank you so much for your dogged due diligence into the Alumni Association inner sanctum.

The very name is now oxymoronic since they sadly no longer represent alumni. The Alumni Association has now become a shill for the Administration’s policies, whatever they may be. Loyalty is to be commended. Mindless sycophancy is not.

I am proud to be a founding member of The Jefferson Council with you. Jim Bacon, you, and our fellow Board members are fighting to return Mr. Jefferson’s University to the ideals upon which it was founded.

Regarding who “owns” The University, on should look at the sources of funding. It is my impression that funding from the state is a small fraction of the operating budget.

How about some PUSH BACK from the Official Alumni/ae Organization on issues such as free speech, DEI, and the huge bureaucracy of administrators to implement DEI — administrators outnumber faculty at The University today as they do at most colleges and universities! But, then again, The University used to not be a clone of other state schools….

My experience with the Alumni Assn. goes back to the mid 60s when Gilly Sullivan ran it, ably assisted by Gordon Burris in the late 60s. Gilly would have numerous contentious meetings with Presidents Shannon and Hereford, discussing (sometimes heated) discussions of alumni concerns…but always representing the UVA Alumni. The presidents were such honorable men that they actually listened to Gilly, and responded to those alumni concerns. These are indeed troubling times at Mr. Jefferson’s University. Walter Smith absolutely nailed the current situation. There has not been an undergraduate alum of UVA in many years that was chosen to be the CEO at Alumni Hall. My understanding is that out of the five finalists when Lily got the job, there were four UVA undergrads and Lily (from UNC). Also understand that ex-Rector Magill was the one who made the choice. Sad!!

Gilly Sullivan was the best!

I think the University of Virginia is a peerless institution. This is an outstanding article that raises essential questions that need be answered and addressed by the appropriate parties. I greatly applaud Mr. Walter Smith and Mr. Jim Bacon for their incredible time and attention of detail in illuminating these areas of concern. They highlight how essential are transparency and accountability.
Thank you.