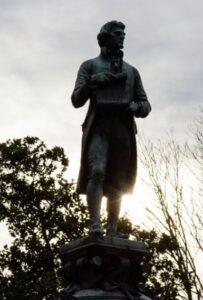 The Virginia Magazine newsletter recently featured this article on two newly formed commissions: one to articulate the university’s commitment to free expression and inquiry, the other to pursue recommendations of the Racial Equity Task Force regarding the renaming of buildings and memorials.

Regarding the first commission, the fact that an internationally respected institution founded by Thomas Jefferson, perhaps history’s greatest advocate for free speech, finds it necessary to study the issue is damning on its own terms. No further comment needed.

My primary complaint dwells on the naming and renaming commission. To start with, I cannot believe a name of an inanimate building, thing or place is truly “harmful” to any thinking person. You could name the buildings after Hitler, Mao, Stalin, Idi Amin, Pol Pot, Nebuchadnezzar, Genghis Khan, or any other offensive person you can think of, and I would not be “harmed.” I might think you were stupid, but I wouldn’t be harmed.

Snowflake sensibilities being what they are, memorializing individuals with place names is fraught with danger. A person who is considered acceptable one day may run afoul of mutating speech codes the next. Perhaps the commission could name university buildings after concepts, such as the “Diversity and Inclusion Building,” or the “Legal Indoctrination House.” But even that is risky. Progressive doctrine changes with the winds. Personally, I’d like to see a policy that openly gives the naming rights to the donor who gives the most money. At least we’d be honest about what is going on.

My second and more important point concerns “contextualization.” Who made members of the renaming committee God and gave them the right to render judgment? What entitles them to apply today’s mores – which are no more based on absolute “moral truth” than the people who bequeathed the original names — to the past? I intend no offense to anyone on the renaming commission, but will any one of them make a contribution to the world that would be one-one hundredth as significant and enduring as Jefferson’s? Why should I accept their standards for whatever “context” they choose to provide? Doesn’t that framing defeat the whole free-speech, pursuit-of-truth thing? Why can’t these busy-bodies allow informed human beings to reach their own conclusions?

What if new medical science progresses to the point that people accept as incontrovertible the proposition that life begins at conception and that the practice of abortion is abhorrent and barbaric, much as eugenics is considered today? Should every person who had an abortion, donated to abortion-related causes, or verbally supported abortion be wiped from history? (For the current group of Marxists trying to tear down everything, that was a rhetorical question with an implied answer of “no.”)

The renaming committee is a power play aimed at destroying history and replacing it with an ideologically driven narrative. Renaming buildings should be unnecessary in an intellectually honest institution dedicated to the pursuit of truth. The purge of names on buildings and memorials is the ultimate in hubris – virtue-signaling without the virtue. When the Jefferson statue is “contextualized,” please leave a large blank space on the plaque for all the contextualizers to be judged years from now.

What a great article by Walter Smith, and also the rest of these:) Thank you!