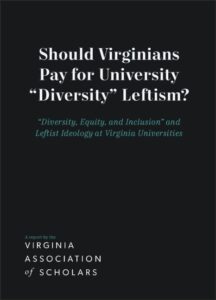 The cost of Virginia’s higher-ed DEI bureaucracy is spinning out of control.

And DEI spending exploded the following year, 2021, at the two universities for which data is available: 119% at James Madison University and 66% at the University of Virginia. So found the report, which was published by the Virginia Association of Scholars and funded by The Jefferson Council and The Spirit of VMI alumni organizations.

In 2020 Virginia State University, a historically Black university, and the Virginia Military Institute, a senior military college, were the only two institutions without a DEI staffer. VMI hired a DEI director in 2021.

Those numbers represent only the most visible of the costs associated with DEI, states the study. “The method used to produce these estimates was conservative: It considered only salaries of public university administrators whose positions are explicitly devoted to some component of DEI – that is, to ‘diversity’ and/or ‘equity’ and/or ‘inclusion.'” The estimates do not incorporate the cost of employee benefits, DEI training, campus events, or departmental-level DEI activities borne by faculty members, and they omit the numbers for Virginia Commonwealth University, the figures for which were not available.

Money devoted to DEI salaries alone in 2021 could have funded more than 1,100 full-tuition scholarships for Virginia students in financial need, the study said.

The ideology behind DEI views the world through the lens of race, sex, gender, and sexual identity, dividing society into oppressors and oppressed, between the privileged and the marginalized.

Some costs of DEI are impossible to quantify in dollar terms, the study said. “The real cost of DEI in higher education is its attack on critical thinking and its subversion of the university itself. … DEI represents the ideological capture of the university by the progressive left.”

“Every lawmaker needs to pay attention to this study,” said James A. Bacon, executive director of The Jefferson Council. “The DEI bureaucracy is growing out of control, and its influence is pernicious. Mandatory DEI statements — ideological loyalty statements — are antithetical to free speech. And the enforcement of DEI ideology through administrative sanctions and social pressure threatens to turn our universities into intellectual monocultures.”

To mitigate harm the study recommends:

This is a bureaucracy gone crazy. If ever there was an opportunity to cut waste, fraud and abuse, this is it. Sounds like a jobs program for all of those college graduates who were awarede useless degrees.

It’s actually worse. This just hits the tip of the iceberg. It subsumes the ethos of every school and every department. The eye is not on education or the creation of knowledge. It is on virtue-signaling, which is the whole “and good” of “Great and Good.”
The BOV needs to rein this in and get back to “follow truth wherever it may lead,” but I don’t know what the problem there is. Are they just political hacks? Do they actually believe UVA and America is systemically racist? Are they scared of being called names? (That’s my bet.)

This whole trend in DEI programming is insidious. It is not only a waste of assets but is actually harmful to students. It is my hope that the Governor has taken some initial steps to reverse the trend of appointing trustees to the various boards to fight this. But he needs to stay focused on the problem and he needs our support.