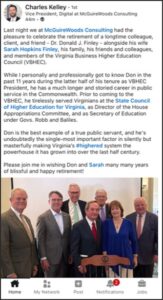 When Donald J. Finley retired from the Virginia Business Higher Education Council (VBHEC) earlier this year, Virginia’s higher-ed industry lost one of its most effective advocates in Richmond. As Charles Kelley with McGuire Woods Consulting tweeted at the time: “Don is the best example of a true public servant, and he’s undoubtedly the single-most important factor in silently but masterfully making Virginia’s #highered system the powerhouse it has grown into over the last half century.”

The goal of the Council is to support “higher ed investment” in Virginia toward the goal of building a world-class workforce. Last month the organization issued a press release applauding the General Assembly for its “historic vote” that would provide “more than $1 billion in new state funding focused on college affordability and talent development.”

The higher-ed lobby is one of the most powerful in Richmond. Not only can universities mobilize the support of business organizations such as Virginia Chamber of Commerce and call upon powerful alumni for assistance, they field a small army of government relations (GR) employees. By one count, Virginia’s public universities alone account for 50 state employees who are compensated (not counting benefits) $8.6 million a year — not counting paid lobbyists.

If you go the the Virginia Public Access Project (VPAP), you will not find the names of these operatives. VPAP publishes the names of registered lobbyists hired by Virginia’s colleges and universities, but the GR employees are not included. For example, you will not find any mention of Colette Sheehy, the University of Virginia’s senior vice president for operations and state government relations, whose salary is $419,000 per year, or George Mason University’s Mark Smith, director of state government relations, who gets paid $212,000 a year.

A source who asks to remain unnamed has calculated the cost of Virginia’s public Government Relations apparatus, which is borne primarily by taxpayers, students, and students’ families. The source supplied names and salaries in a spreadsheet, which I reproduce here with formatting modifications to fit the blog. (The shaded names are registered lobbyists hired by the university. No data is available on how much they are paid.) 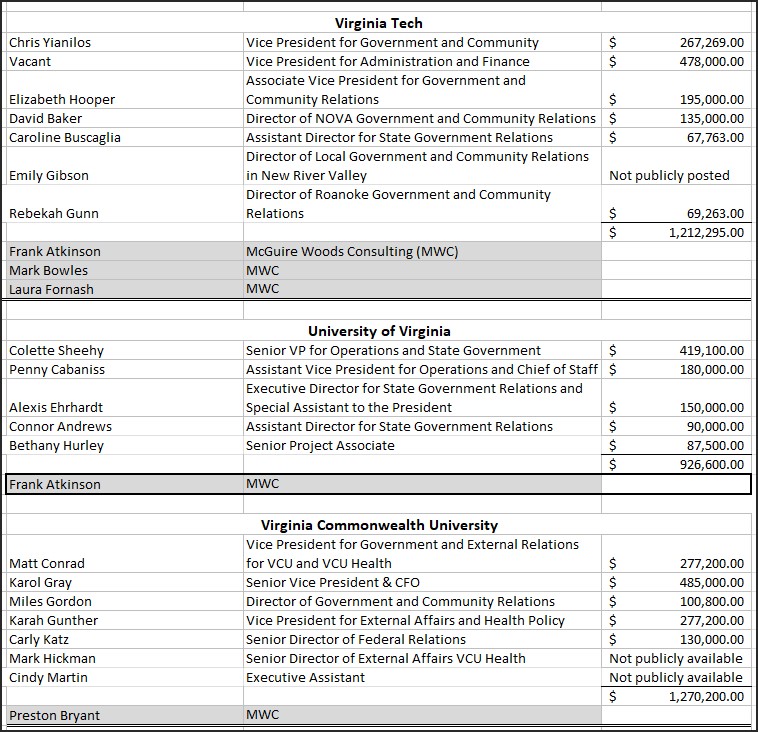 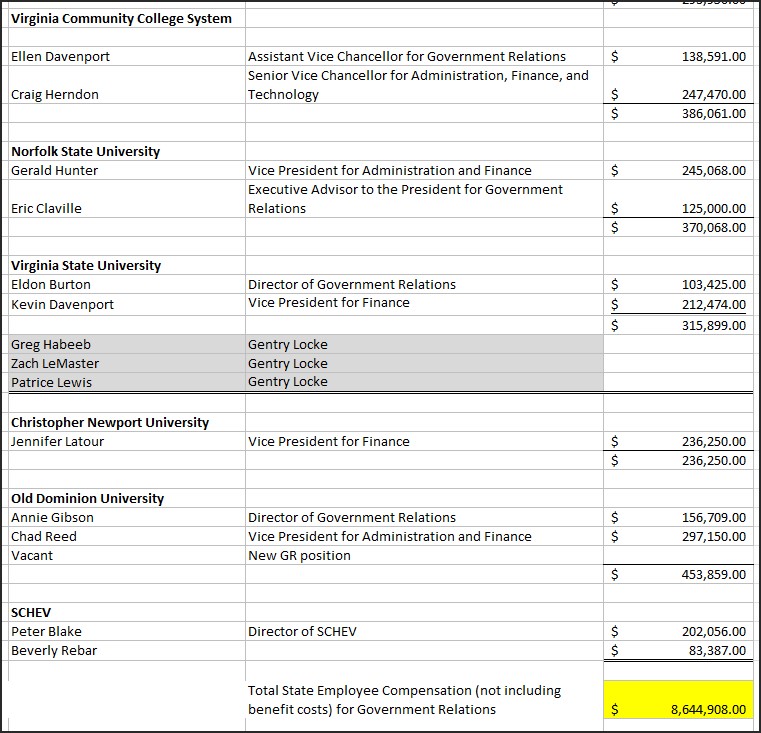 One might quibble with the methodology used here. Some positions, such as UVa’s Sheehy, Virginia Tech’s vacant vice president of administration and finance, and Peter Blake, executive director of the State Council of Higher Education for Virginia, have broad responsibilities. Government Relations are only part of their portfolio. But by any accounting, the sum devoted to GR is large — and not very transparent.

There once was a time when one could make the argument that what was good for Virginia’s public colleges and universities was good for Virginia. Citizens count on the higher-ed sector to provide a quality education, and businesses count on it to meet the demand for skilled and educated workers. But citizens are increasingly calling into question the value of a college degree. Who wants to pay $100,000+ to send their kid to school to be indoctrinated in what to think not how to think?

While the primary purpose of these GR employees may be to canoodle more direct state support to universities, more scholarship money to offset ever-escalating costs of attendance, more state financing for new buildings, and more research dollars, their jobs now touch upon an increasing array of culture-war issues. As Virginia’s elected officials confront matters relating to free speech, free inquiry, and “social justice” emanating from colleges campuses, GR employees are not obligated to represent the public interest. They work for their university presidents, who increasingly see their role as exporting the preoccupations of the progressive elite — social justice and climate change — to their communities and Virginia at large.

It now can be argued that what is good for Virginia’s public universities is bad for Virginia — or at least detrimental to the majority of the population that does not identify as politically progressive. The GR apparatus deserves much closer scrutiny that it has received so far.