We had an introductory full page ad in the last edition of the Magazine: 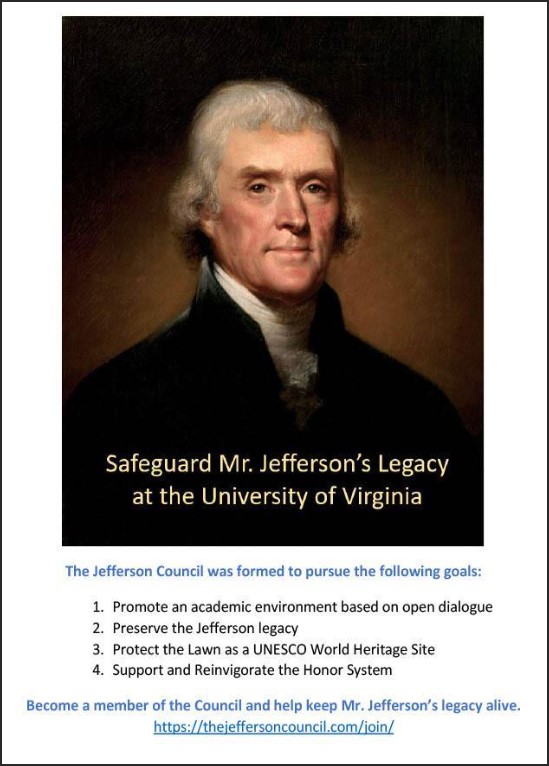 As we considered the content of our next ad for the current issue of the magazine, we were materially influenced by the current controversies surrounding the University Guides and Monticello and their relentless attacks on our Founder, Mr. Jefferson. The accusations that he was a “rapist” and/or that he fathered multiple children with Sally Hemings are unsubstantiated by conclusive fact, are highly controversial and by all means are open to reasonable dispute.

Nevertheless, the Magazine itself in the past has published articles that present Mr. Jefferson’s alleged paternity as fact. Accordingly, we thought it timely and appropriate to submit an ad that presents both incontrovertible facts and directs the reader to scholarly articles that question the veracity of the subject charges against our Founder. This is the ad we submitted: 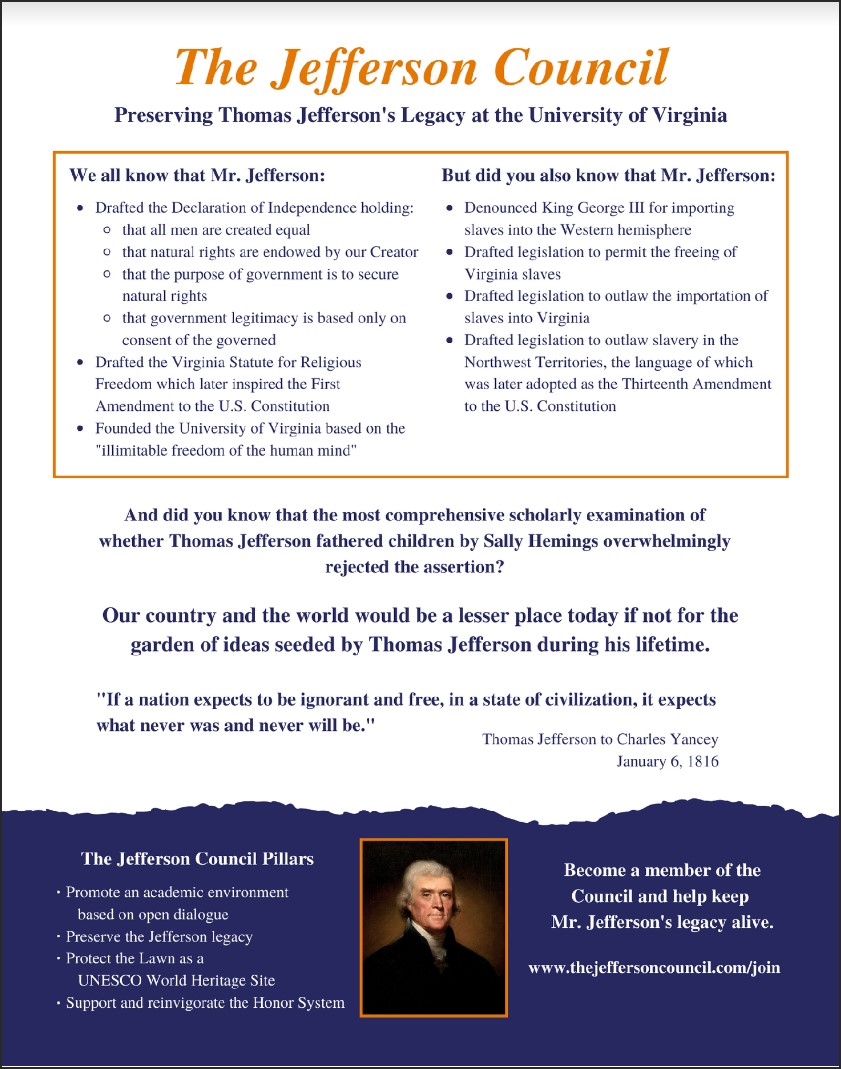 The editor of the Magazine, Richard Gard, rejected the ad stating that it contained content that is “political or contentious, untruthful or misleading.” However, Richard did not specify what part of our ad fit any of those conditions. He offered to publish our previously submitted ad.

A number of our Board members objected to the ad’s rejection, and appealed the decision to Lily West. However, Lily supported that decision by Richard, stating that “the assertions in the ad copy are open to reasonable dispute.” She then offered to run the previous version of our ad or an “alternate version” of the one submitted. But, once again, she did not specify what part of our ad was open to “reasonable dispute” nor did she delineate how the ad could be “altered” to her
satisfaction.

We are greatly disturbed by the Alumni Association’s decision to reject our ad and Lily and Richard’s responses on numerous levels:

In conclusion, we hope that after reviewing the above, you will agree that the Association did not act appropriately in rejecting our ad and that you will support the Association taking remedial action in this regard.

The Jefferson Council Board

Would you consider re-submitting the ad eliminating the reference to Sally Hemming? I think the opportunity to grow the membership through exposure in “The Magazine” outweighs the argument regarding the question of Jefferson’s paternity. Fight the battles you can win.

This is a good question. Would they publish the ad if the Sally Hemming claim was removed? I would be interested in hearing their answer.

We had an ad in the prior 2 issues: Winter 2021 and Spring 2022. As you see above, it was simply a listing of our 4 principles with the Peale Jefferson portrait and our website link. I’m the TJC Treasurer and asked Lily West if the Sally Hemings reference was the offending phrase in our new ad and would she print the ad if we removed it, trying to ferret out her issues. She refused to specify what “offended” her.

For the record, not one statement in the ad is false. All the citations in the top chart are factual Jefferson accomplishments.

Uva may be gone. President Ryan believes he owns our bodies and can tell students and employees alike what they must do with their bodies. He said directly about if a student doesn’t want the jab, they don’t need to go to Uva. This would be considered tyranny to TJ!

Karen Fullerton, we asked that specific question, but Lily West refused to answer what offended her in the ad.

Thank you for clarifying. Apparently our alumni association is too lily-livered to promote Thomas Jefferson. How sad and offensive. Surely there is another, more noble and worthy cause that would be happy to receive our donations. After all, UVA’s alumni association isn’t changing lives or saving the world. Sometimes you have to vote with your feet.

The Jefferson Council will gladly accept any contributions you otherwise might have given the alumni association!

You’re welcome, Karen. Please join The Jefferson Council and spread the word! We are bringing in conservative speakers, supporting conservative student groups like YAF, and promoting balanced intellectual diversity on the Grounds where all views are heard and tolerated – liberal AND conservative.
https://thejeffersoncouncil.com/join/.

Last edited 29 days ago by Wahoo'74
0
Reply
wpDiscuz
9
0
Would love your thoughts, please comment.x
()
x
| Reply
%d bloggers like this: