A Backlash at Last 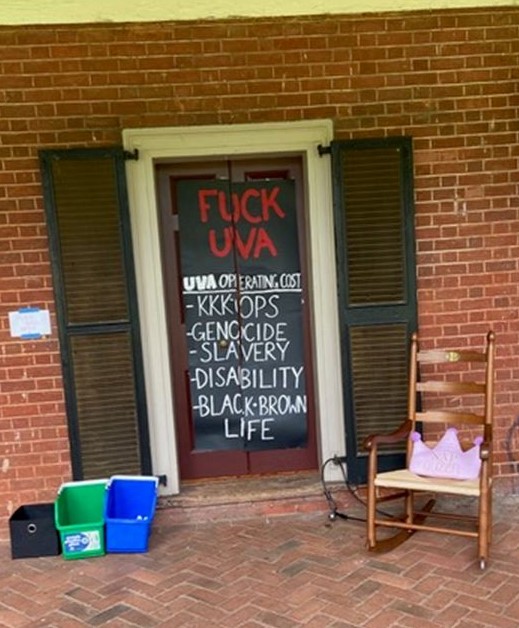 Scene on the Lawn at the University of Virginia.

A message addressed to “Friends of UVA” by Bert Ellis, class of 1975, is passing around virally by email. Reed Fawell posted the message in the comments on a previous post but did not mention Ellis by name. Given the fact that Ellis is a prominent and wealthy alumnus — he is CEO of Ellis Capital — his opinions matter. I am republishing his open letter on the blog because everyone needs to see what has become of “Mr. Jefferson’s University.” — JAB

This is a sign posted on a Lawn Room door right now. It has been up like this for about 2 weeks. I sent the picture to President Ryan a week ago and asked if the University was going to permit such a sign to stay up on such a public place as the Lawn. I told President Ryan that I absolutely support this student’s right to his/her political opinions and hir/her right to express them on his/her Lawn Room door but not the profanity. Ryan responded immediately and told me “We’re working on it”.

This past Friday I went to Cville to knock on this door (room 36 East Lawn) and discuss the sign with the current occupant….if the sign was still there. It was. Not only is the University not going to remove it, they have assigned 2 UVA Ambassadors … to patrol the Lawn and prevent anybody else from taking it down, ie me. The University has determined this is her first amendment right.

So I guess by their new standards it would be okay to hold up a Fuck Duke sign in the JPJ during a televised basketball game…or okay to put a Trump sign on another Lawn Room door underneath a big Fuck Liberals sign. Do you think???? I walked around the entire Lawn and was rather dumbfounded to see how many very radical liberal signs were posted on doors albeit this was the only one with such profanity. Not one alternative POV did I see.

I did knock on the door and introduced myself as a former Lawn Resident of many years ago and asked the resident of this room in a very calm voice from a comfortable social distance why she needed to use such profanity to make her point in such a public place. She told me that these issues needed attention and the profanity of this sign gets attention. I asked her if she had not learned during her 3 years at UVA any other way to get attention to make her case in a political discussion other than by using incendiary and profane language to which she said “it certainly got your attention.” I told her that the rest of the sign also got my attention and I am here to discuss it.

I then asked her why the need for the denigration of UVA to which she said UVA is as much a cause of all of this as anything. I asked her to explain that and she said the following; (I think this is a very accurate quote):

“This institution was founded by a degenerate who owned and raped his slaves and then stole this property to build this institution for rich white people with slave labor.”

I spoke a little longer to her “door” and said the sign certainly got my attention, but I can only assume she is not willing to debate any aspect of her views except with people that totally agree with her….this is the new collegiate way of debate. Only the liberal (and now increasingly radical liberal) point of view is allowed in signage or debate on any college campus including our own UVA. Nothing else is permitted or even tolerated.

Then the 2 UVA ambassadors who were standing right behind me asked me to leave. I engaged in a discussion with them as to what they are instructed to do by the University and they answered they are posted to prevent any damage to that sign. I was prepared to use a small razor blade to remove the Fuck UVA part of this sign and they said I could not do that as it would be considered malicious damage to the University and a violation of this student’s First Amendment Rights and they were prepared to restrain me from so doing. I politely debated this incredibly stupid position with them but left without modifying the sign as I intended.

This is the level to which our University has disintegrated. Pres Ryan could certainly prohibit the profanity as is done at JPJ or other sports arenas ( at least it used to be done) and/or he could just ban all signage except on specific public posting sites, ie bulletin boards , but he has decided as just another liberal academic to tolerate this bull crap.

In my view, this is now the official UVA position and I think this woman feels she could go paint Fuck UVA on any bldg and certainly on any Jefferson statue as her “right of free speech”. I think she would argue the University allows The 7 Society, Z, and IMP to paint signs on the bldgs so why not her message. I think our current President and his administration see it her way and would permit this. President Ryan is as bad if not worse than his predecessor at UVA.

Get ready for more of this. Our only ability to do anything about this is to withhold our checks. The University is about to embark on anther huge fundraising campaign and we need to say no.

I do urge you to go see this for yourself. In my view, it is totally disgusting.