A Small Victory for Pluralism 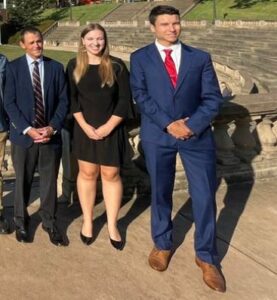 UVA President Jim Ryan (left) poses with members of the Young Americans for Freedom at the 9/11 commemoration ceremony.

I’m beginning to have a smidgeon of sympathy for University of Virginia President Jim Ryan.

On the 20th anniversary of 9/11, Ryan attended an event sponsored by the Virginia branch of the Young Americans for Freedom (YAF) to commemorate the lives lost in the terrorist attacks. YAF is an avowedly conservative group, and the keynote speaker, retired Col. Dan Moy, is a UVa lecturer but also chairman of the Republican Party of Charlottesville. Nevertheless, the ceremony, which featured 2,977 miniature flags in the grounds, one for each American live lost — was not overtly partisan. Unless you happen to think that remembering lives lost to terrorism is itself partisan.

Ryan tweeted his appreciation to YAF. “Many thanks to YAF @ UVA for organizing this morning’s moving event commemorating the lives lost on September 11th,” he wrote.

“The only charitable interpretation of this is that you didn’t know how terrible YAF is,” Twitter user Gareth Gaston wrote. “If that’s the case you must repudiate your statement immediately. And if not, well then we can only assume you support them.”

“Were you aware that YAF denies systemic racism, ridicules common sense policies that seek to limit the spread of COVID-19 on campuses and regularly refers to your colleagues as ‘crazed leftists?’” tweeted Chinese literature professor Jack Chen. In a follow-up email to the Cavalier Daily, he wrote, “It’s disappointing to see our University president embrace an organization whose primary purpose seems to be to manufacture outrage from outside the University and to direct that outrage toward the most vulnerable members of the University community.”

Ryan did not back down. In a media post provided by University communications, he responded:

September 11, 2001 was a day that forever changed our nation, and I was grateful to have an opportunity to honor and remember those who lost their lives and those who were affected by the tragic events of that day. On a personal level, as someone who lost a friend at the World Trade Center and had other friends and family members directly and forever impacted by the attacks, I appreciated the occasion for quiet reflection with colleagues, students and other members of our community.

The incident shows what Ryan is up against at UVa, where there is a strong culture of intolerance to non-leftist views. In that culture, a rare conservative student organization like YAF is deemed not merely misguided, or wrong, it is beyond the pale of acceptable discourse. It must be canceled. The administration must disown it. (I would add that the negative allegations against YAF are are utterly without substance, but defending YAF is not the purpose of this post.)

Ryan’s decision to attend YAF’s 9/11 commemoration service sends an important signal. While the culture of UVa may be predominantly leftist, the university will accommodate viewpoints not shared by the Twitter Outrage Mob. That’s a positive sign.

At the same time, those who wish UVa to remain a beacon of intellectual diversity open to a wide range of ideas should not make too much of this small symbolic victory. Under the banner of “Inclusive Excellence,” the university under Ryan has unleashed a bureaucratic monster that enforces a rigid “Diversity, Equity & Inclusion” orthodoxy, while his deans are busily replacing older, more heterodox professors with a younger generation of leftists. Bacon’s Rebellion will have more to say about that soon.

Totally agree, Jim. I applaud President Ryan for both his attendance at the 9-11 memorial ceremony as well as his follow up response to Professor Chen and the howling mob.

The Left’s hypocrisy knows no bounds. The Professor and UVA students via social media accuse YAF of “intolerance” and manufacture lies about their core philosophical tenets. Meanwhile, they trample on the honorable sensitivities of anyone who honors the innocent Americans slaughtered by radical Islamic terrorists.

I am hopeful that the perpetrators who desecrated the memorial are caught then prosecuted to the fullest extent of the law and University regulations should they have been students. I have little doubt that they were.