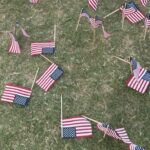 A few days ago I reported an alleged act of vandalism against 2,977 tiny American flags, planted in the ground as part of a 9/11 commemoration at the University of Virginia. The evening after the service, which was sponsored by the conservative Young Americans for Freedom and attended by President Jim Ryan, it was discovered that hundreds of the flags had been knocked over. A preliminary review of surveillance tapes suggested that two unidentified individuals had flipped over a table with a banner.

A review by UVA police now suggests that wind might have blown over the flags and that the person in the video might have been trying to set the table right.

The incident had drawn considerable attention at UVa. Two days ago Ryan updated the Board of Visitors about the incident. I republish it here;

You may have heard allegations that a 9/11 memorial in the amphitheater, erected by students, was vandalized last weekend. The memorial consisted, in part, of small flags stuck in the ground — each representing a life lost. There were also signs, and a table that was used during the ceremony, which I attended.

[University police] just finished an investigation yesterday, which was slightly delayed given all of the recent and pressing efforts on their part to increase our capacity to keep our students safe in light of the uptick in gun shots fired and suspicious activity. Long story short, there was no vandalism to the memorial. An officer reviewed complete video footage of the scene, beginning with the ceremony in the morning of 9/11 until the pictures were taken of some flags strewn about the amphitheater. At no point does anyone knock over flags. Several people picked up flags that had blown over from the wind and stuck them back in the ground. It was also fairly breezy at various points during the day and early evening. As the officer reports, “it appears that the flags were knocked over by the breeze that was occurring on that day.”

There was also a suggestion that the table used in the ceremony was flipped over in anger. The video instead shows someone picking up the table long after the ceremony was over (which means there was nothing on the table), putting the table on its side and folding down a leg. As the officer reports, the person “lifted the table in a gentle manner and did not forcefully flip the table.” The table does not appear to have been damaged.

There were also two signs hanging up in the amphitheater for the ceremony on Saturday. Those two signs were still hanging as of Thursday morning.

In other words, this was a false alarm — and a good reminder, to myself included, not to jump to conclusions before having all of the facts. If you have additional questions, Chief Longo, copied here, would be happy to answer them.