Alumni Are Mad As Hell — and They’re Organizing! 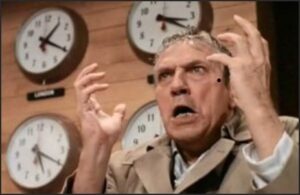 College alumni, to borrow the classic phrase from the 1976 movie Network, are mad as hell and aren’t going to take it anymore. Unlike the fictional TV newsman played by Peter Finch, who had no idea how to channel his frustration, alumni groups around the country are organizing to push back against the relentless assault on free speech and diversity of thought in American universities.

Woke leftists are deeply entrenched in higher education, but alumni who attended a two-day conference organized by the American Council of Trustees and Alumni (ACTA) and the Alumni Free Speech Alliance (AFSA) are stoked. The movement is spreading, and alumni are taking heart, knowing that they aren’t isolated and alone.

Groups from eleven universities have joined AFSA, and several more are in the process of creating viable organizations. Alumni from dozens of other universities have expressed an interest in launching their own initiatives. Meanwhile, AFSA has forged valuable alliances with well-resourced national organizations such as ACTA and the Foundation for Individual Rights in Education (FIRE) that stand ready to help.

Three of the 11 alumni groups hail from Virginia — the Generals Redoubt (Washington & Lee University), the Spirit of VMI (Virginia Military Institute), and The Jefferson Council (University of Virginia), with which I am affiliated. Virginians are at the center of the storm. We are perhaps better positioned than any of our peers to transform the state’s higher-ed institutions from bastions of narrow-minded leftist orthodoxy into centers of learning where pluralism is tolerated and diverse ideas are allowed to contend.

What makes us special? No other state in the country has the confluence of (1) strong dissident alumni organizations, and (2) allies in the statehouse committed to the fight to uphold free speech in public universities.

Conversations with Youngkin administration officials have led members of the UVa and VMI groups to believe that Governor Glenn Youngkin will appoint new members to Boards of Visitors who are willing to stand up for free speech and intellectual pluralism. With his firing of university counsels at UVa and George Mason University, Attorney General Jason Miyares likewise has signaled a possible willingness to roll back activist legal guidance in furtherance of woke initiatives.

If Bacon’s Rebellion readers at other universities have ever thought of getting involved, the time is now.

AFSA will help new free-speech alumni groups get organized. You don’t have to reinvent the wheel. We can guide you in:

We will set up Zoom meetings and find mentors to walk you through the process.

As AFSA grows, our goal is to act as a clearinghouse for alumni-related news, strategies and success stories. We expect to share articles, videos, podcasts, white papers, and other types of content. We will create forums and affinity groups to discuss practical approaches to challenges ranging from raising funds and growing email lists to building relationships with students, parents, and faculty.

The initial impetus behind the alumni rebellion comes mainly from political conservatives, who tend to be the most outraged by the suppression of free expression by conservatives on campus. But AFSA is consciously pursuing a “big tent” strategy. Many left-of-center stakeholders are also distressed by the intolerant, hard-left drift at many universities. Speakers at the AFSA summit included Nadine Strossen, a liberal feminist who led the American Civil Liberties Union for 17 years through 2008; Jonathan Rauch, a journalist, gay-marriage advocate, and Brookings Institution scholar; and John Thomasi, a Brown University political theorist and director of the Heterodox Academy.

Accordingly, while member organizations are free to pursue their own college-specific agendas, AFSA is focused on the broad themes of free speech, free expression, open inquiry and intellectual diversity that cut across partisan loyalties. The goal is not to purge woke leftists from college campuses but to create campus climates where the non-woke feel free to speak out, intellectual diversity is valued, and a wide range of ideas are debated.

You can find out more about the Alumni Free Speech Alliance here.

Join these organizations in fighting for free expression:

We’re all in this together, and we stand ready to help.

Jim Bacon serves on the boards of the Jefferson Council and the Alumni Free Speech Alliance.