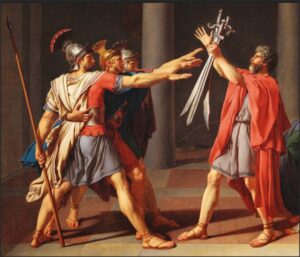 In elections this week, University of Virginia students will vote on a measure to reduce the punishment for honor-code violations (lying, cheating, stealing) from expulsion to a two-semester suspension. At least 10% of the student body must participate in the referendum, and of those who vote 60% must vote in favor.

The honor code is administered by students, not the university administration, and it has evolved over time as cultural values have changed. But faculty, administrators and the Board of Visitors traditionally have buttressed the system. For decades, stirring introductions of the honor code were a central part of the student orientation. Benefactors endowed the alumni association with a multimillion-dollar fund to support the system. To this day, the Board of Visitors mission statement lists preservation of the honor code as one of the board’s core duties.

The system has eroded badly.

Support for the single sanction has declined in part due to changing student values. Moral relativism, situational ethics and a reluctance to administer harsh punishments predominate in the student body. Indeed, viewing honor through a social-justice lens, some see the system as a tool of racial and cultural oppression. But UVa leadership bears a share of the blame. Recent administrations have taken an increasingly laissez-faire approach. Student orientations place far more emphasis on Diversity, Equity & Inclusion than honor.

I’ll concede, the honor code does raise sticky questions about what constitutes a “lie.” “No, honey, you don’t look fat in those jeans,” is a harmless social lie. Lying about one’s age to get a fake ID is far more serious. There is a wide spectrum of gray between the extremes. But there was never any ambivalence about cheating or stealing. Rigid adherence to the honor code created a “community of trust” in Charlottesville. Students could leave their backpacks, books, and other belongings in public spaces secure in the knowledge that no one would take them. Merchants accepted checks without asking for IDs. Professors allowed students to take tests in their dorm rooms — no need for proctors.

Trust is a form of social capital that allows people to do things they would not otherwise be able to do. As Francis Fukuyama explained in his 1995 classic, “Trust; The Social Virtues & the Creation of Prosperity,” high trust societies (which then included the United States) enjoy tremendous advantages over low trust societies. People cooperate more readily in business, civic and political life. Those in authority are more willing to delegate power and responsibility. High levels of trust allow more innovative forms of social and economic organization to emerge.

The United States is evolving into a low-trust society. Gallup polls show that Americans’ trust in public institutions near the lowest level since it began tracking public opinion after the Watergate scandal. Only 12% express confidence in Congress, 16% in television news, 20% in the criminal justice system, and 21% in newspapers. The only institutions scoring above 50% are the police (51%), the military (69%), and small business (70%).

The Gallup poll doesn’t ask how much Americans trust each other. But a 2019 Pew Research poll did explore that question — and the findings are discouraging.  Sixty-four percent said that Americans’ level of trust in one another has been shrinking. Respondents blamed greed, dishonesty, crime, racism, corrupt and ineffective government, biased news media, the decline in religion, and Donald Trump, among others.

What the poll did not explore was changing social mores or the role of leadership (or lack of it). American culture today is far more preoccupied with excusing peoples’ ethical lapses (except those of their partisan foes) than articulating and upholding moral standards. In that regard, UVa is a sad reflection of American society as a whole.

I belong to the Jefferson Council, an alumni-led organization whose primary goals include upholding the honor system. Our discussions with faculty members have found that the code is in serious disarray. Cheating is rampant. Students are reluctant to bring charges. The adjudication system has become more bureaucratic and time-consuming for the professors who do. Sometimes professors find themselves on the defensive. Few are willing, we have heard, to undergo the ordeal.

In response to the news of the student referendum, according to UVA Today, Rector Whittington W. Clement praised the honor code but did not endorse the single sanction. “Even as society has changed in profound ways since our student days, core values of truthfulness and fairness in dealing with others is immutable,” he said. “We trust that students will weigh the merits of the proposal and be guided by a deep conviction that an effective, fair system of honor should continue to be a hallmark of every University of Virginia student and graduate.”

President Jim Ryan was more diffident. He damned the honor system with faint praise: “At its best, the Honor System fosters a culture and a community — a community of trust — and is internalized as a way of life.” At its best? What does that mean? Are we to infer that UVa’s honor system falls short?

Alluding to UVa’s tradition of student self-governance, Ryan stressed that students are in charge. “Educate yourself about the Honor System and this referendum. Reach out to your friends and to alumni to learn from their views and their experiences. This is ultimately your choice.”

Ryan is showing no moral leadership. The man who declares that UVa can be “great and good” is sitting this one out.

As honor codes go — and they are under assault at the Virginia Military Institute, Washington & Lee University and pretty much everywhere else — so goes America. No wonder trust in our society is eroding. No wonder Americans are losing faith in their institutions. No wonder we are a polarized and paralyzed nation. If we can’t hold the line at UVa, where can we hold the line?

My Word War II father and school principal would often implore to his four sons, “a fish rots from the head down.” Obama, Biden, Ryan, Schumer, Pelosi, McConnell, on and on. Get rid of them!!!

From Grounds to the White House, and Back Again: Professor Mary Kate Cary – The Jefferson Independent

[…] revered founder. “Having students in charge of so many institutions on Grounds—including the Honor System, which we all believe in and want to grow stronger—is great training for UVA graduates to go out […]