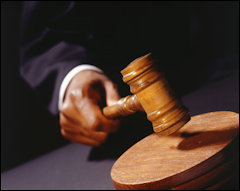 Bhattacharya’s case generated a flurry of attention among conservative media when it was filed more than a year ago. The med school student described an event at which he critiqued the logic of a faculty member opining on the subject of microaggressions. He expressed the view that “a microaggression is entirely dependent on how the person who’s receiving it is reacting” rather than how the statement was intended. The incident prompted a colleague to file a “professionalism concern card,” after which ensued a train of administrative hearings, Bhattacharya’s involuntary commitment to a mental health facility, the issuance of a no-trespass order banning him from the university grounds, and his subsequent expulsion from med school.

Evidence entered by UVa highlighted Bhattacharya’s mental health issues and made the case that the administrative hearings and other actions concerned words and actions unrelated to the microaggression event. The Hawaii native suffered from bipolar disorder and exhibited aggressive behavior toward his mother and ex-girlfriend. The colleague who filed the professionalism concern card, UVa argued, was motivated not by the substance of his observations about microaggressions but by his demeanor.

Throughout this case, the University has stated plainly in court filings that administrators’ actions with respect to Mr. Bhattacharya stemmed from concerns about his behavior and mental health and bore no relation to his public statements, which were protected by the First Amendment.

The University has and will continue to promote and protect the rights of community members to express their ideas and to challenge ideas with which they disagree. We are pleased that the judge has granted the University’s motion in this case.

A sad waste of time and resources on the part of both parties. But apparently a reflection of our litigious society.

A more important issue than it may appear, given the students who are to be disciplined under the growing number of university red flag rules. If you want to read the prelude to an ugly future of politically motivated tattling and informing, take a look UVA’s practice on ‘Professionalism Concern Cards’ – https://tinyurl.com/2p8rxjt9.

Given the subjective nature of a university’s intent, as this continues (and it will), we may ultimately be left with only statistical evidence of bias. That is, are universities disciplining anti-social liberal females at the same rate as anti-social conservative men? I predict that it will not be so, not least because Harvard alerts us that Asian men score very low on critical traits like ‘positive personality’.

The left teaches that any discrepancy in rates of discipline amongst groups at school is the result of racism. So, tally one for disagreeable, Asian men at UVA. I look forward to seeing who is next.

Sounds sketchy on the part of Uva. I’m sure Uva did bad things, as they tend to do.

I listened to the tape of the presentation in question, including Bhattacharya’s questions. His questions were obvious and it’s a scandal that he was the only one asking them. There wasn’t any problem with his demeanor. He was obviously a little nervous–that was, of course, rational given that he clearly knew that blowback was a likely consequence of questioning woke-left orthodoxy. And that’s exactly what happened.

His questions were reasonable and fairly mild. In philosophy, it would be considered a rather gentler-than-average round of questioning. In actual scholarly disciplines, you see, people go at each other in the Q&A, and there’s a fair bit of intellectual/scholarly rough-and-tumble.

In the brave new world of the contemporary university, however, Woketarian dogma is not to be questioned.

William Knorpp, the whole debacle is an embarrassment. Apparently UVA students cannot question, respectfully or otherwise, the DEI orthodoxy that is now dominant among the faculty.

Free speech? Doubtful for all but those on the DEI aggrievement train.

Please note that the issue Bhattachara made the case on had nothing to do with the actual event where he questioned the speaker, but was about his accusations that UVa retaliated by treating him unfairly afterwards. So your opinion on the tape has nothing to do with how the UVa may or may not have treated him afterwards. It is a moot point.

I beg to differ. His dismissal may have ultimately been appropriate. What is not and was not is that this started over a “professionalism concern card” filed after he questioned “micro-aggressions” by one of the program sponsor/participants. I would disagree that there is not a “scintilla” of evidence – the timing and filer alone seems highly suspicious.
Maybe it will be appealed, but it is hard to overturn a federal judge, even though summary judgment is not to be lightly granted.
I also very much dislike qualified immunity given to these college administrators – a policeman is punished for a bad split second decision, under great stress. These people from their lofty ivory tower perches violate rights with plenty of time to make an informed lawful decision. And the Commonwealth will bail them out. They have no incentive to change their illegal behavior.

Surely Mr. Bhattachara gave specific instances that he considered were retaliations against him. Either they were justified, and not just because of his comments that day, or they were not. Seems to me that unless you are aware of what they were, you cannot judge them.

We must differ in the definition of “scintilla.”
The timing alone to me is a scintilla. And the problem is that the mere violation of his speech rights has no remedy, and it should.
He very well may have been a risk and properly dismissed. But, the professionalism concern card is positively Orwellian. Have you seen a professionalism concern card?
I have. I could file one against you for lacking compassion to someone different (because the kid is supposedly “on the spectrum”). And then you would get investigated. Would you be insulted? Maybe, his erratic behavior was “triggered” (great Lib word to excuse bad behavior) by the Orwellian MiniTru process.
This whole story is a tragedy, including UVA’s investigation for him asking tough questions. I think the real problem is he proved the entire micro-aggressions field was bogus and for that he had to pay. THAT is a disgrace, no matter how you cut it.

Respectfully, it is surprising that a woman is not sensitive to the potential for abuse here. Mr. Bhattacharya’s lawsuit was dismissed because he was unable to provide a smoking gun that his treatment was due to his speech.

But administrative perpetrators are not going to document an illegal purpose. They will not say, “your opinion troubles me.” Rather, they will document a pretext – “your anger is unprofessional.” And, if you read the ‘concern card,’ that’s exactly what happened: his “lack of respect” was “shocking” to a female observer. And professor Rasmussen interpreted Bhattacharya’s ‘frustration’ by ‘reading his body language.’

Women and minorities contend they have been suffering with this for years in business; being denied opportunity for being “too aggressive” or “not a team player.” And our culture has no trouble being suspicious of that.

In this case, however, because it is someone who is skeptical of favored political propaganda, we are comfortable ruining a life over unverifiable, subjective criteria like body language. There is no justification for this, save, perhaps, that it is now time for reciprocal punishment.

And this young man will never be a doctor. That is lost in this discussion. A bright mind wasted due to speaking truth in a Med School discussion.

Is it not obvious and clear that given the judge this case was assigned to it had absolutely no chance of ever going forward? Does anyone think UVA is not going to impose its will on the local “justice” system? Once again to any discerning observer woke UVA in this incident has sadly soiled itself. The chickens WILL come home to roost.

I never thought about checking on the Judge…
Appointed by Slick Willie…and a BA, JD and LLM from…UVA!

There is nothing reasonable as to a woke UVA including its promotion of racist DEI, CRT and IBT ideology. As we are seeing with this case the “subjective” clause utilized in UVA policies allows for the imposition of woke dogma which cannot stand up to the test of reasonable debate, let alone questioning, as Bhattacharya had the audacity to do. UVA sadly makes itself look small.

And to reiterate, if an appeal is to be considered first and foremost find a judge who will issue rulings based in reason and not biased leftist dogma and narrative.