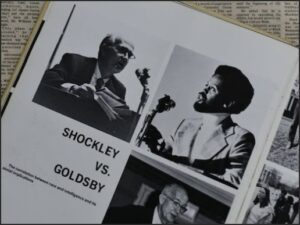 The CD piece does not call Ellis a racist outright, but it invites readers to draw such a conclusion by recounting how he was instrumental in bringing a prominent racist to the university despite the vehement opposition of some African-American students.

What the CD article overlooks is that Shockley, who won the Nobel Prize for his contributions to the invention of the transistor, was giving numerous speeches and garnering widespread media attention at the time for his view that Blacks are genetically inferior to Whites. It also neglected to report that the Student Union also recruited Richard Goldsby, an African-American biologist who argued that race is a social construct, to debate Shockley.

“We wanted the issues thrashed out,” says Ellis. “It was a true debate that was a sold out event. Richard Goldsby took him to task.”

To hold such a debate today would be considered beyond the pale. But the debate made a positive contribution to the discrediting of racism at the time. Many Whites still believed in Black genetic inferiority in the mid-1970s, and Shockley gave their prejudices an intellectual gloss. Those views also were under increasing attack. Harvard, Princeton and Yale had canceled Shockley appearances in response to student outrage, but such intolerance only make him a martyr in the minds of many. Shutting down a speaker might silence him for the moment but it does nothing to refute his views. By contrast, the UVa Student Union event gave Goldsby an opportunity to demolish Shockley in a mano a mano debate.

UVa was a much more intellectually vibrant place in the mid-1970s than it is today, when people whose views conflict with the reigning orthodoxies are scolded and bullied into silence. During Ellis’ tenure at the Student Union, UVa hosted the first public speech by John Dean after he pleaded guilty to obstruction of justice in the Watergate controversy and turned government witness against President Richard Nixon. The Student Union also hosted the first public viewings and analysis of the entire Zapruder film of the Kennedy assassination.

“We had some real major events back then,” says Ellis. “Students paid real money to go to them, and the events were packed.”

That’s certainly more than can be said today when the only controversial speakers, such as former Vice President Mike Pence, are paid for by outside organizations like The Jefferson Council (of which Ellis is president) and the Young America’s Foundation. True to form, The Cavalier Daily denounced Pence’s appearance, too.

One might hope that the thought police at the Cavalier Daily and in Student Council might ponder how racist ideas were discredited in the first place. If their predecessors at UVa had adopted the same approach, they would have shut down those who challenged the old racist dogmas. One wishes that these passionate but misguided students will come to understand that they hold the views they do only because others had the freedom to speak about them, write about them, and defend them publicly.

Bert Ellis championed freedom and diversity of thought as a 4th-year student in 1975, and he does so today. As a member of the Board of Visitors, he will continue to fight for free expression and intellectual diversity.

The editors of The Cavalier Daily could earn a modicum of respect by challenging Ellis’ ideas directly. But delving more than 40 years into the past for a controversial event and omitting critical context to tar him through guilt by association with a now-discredited racist does nothing to advance any worthy cause. The CD article discredits only itself.

Full disclosure: The author is vice president-communications of The Jefferson Council.

Jim, you nailed it, and exposed the incredible hypocrisy of the Cavalier Daily. The CD Editors have become a SNL parody of a woke student newspaper, lashing out at a respected new BOV member while twisting the story of the William Shockley event he arranged when he was an undergrad. The CD editorial staff needs to be called out every time they spew out slanderous falsehoods.

Great article, Jim! You know, the “herd instinct” is strong, particularly in college-age youth. I would like to think that students of UVA caliber would not be influenced by it, but it apparently is hard to resist, particularly when most of the faculty & administration are part of the herd.

I remember the event. Pretty sure I attended as I remember all the protests about the event and have a vague memory of sitting in U Hall for it. Regardless, students had a ton more courage back then than do the editorial board of the CD. They should stick to reporting sports, and Bert – who might consider a more subtle and less angry approach himself – should NOT resign.

Jim,
You have professionally, once again, exposed the faulty and dishonest pseudo journalism of the current CD staff. It is so important and inspiring that these practices are being challenged in a precise and objective way. The reader comments of Wahoo74 and 76 are right on point as well!
Thank you for the great work in exposing this blight on the University of Virginia.
Senior Flyer

It’s hard for contemporary students to understand that universities used to be devoted to the search for truth via vigorous, unfettered debate and the free exchange of ideas.
I suppose it seems quaint now, when students are simply indoctrinated directly with the politically correct and culturally acceptable conclusions. But that’s the way we used to do it.

Paul Dowling”s piece in”The American Thinker” is an interesting read about the efforts to erase Jefferson from the University.

Meanwhile, what is the Daily doing about Woodrow Wilson’s name on a building and an academic department at the U.

Thank you for a great article, Jim. As a biased admirer, I offer the following, constructive feedback for consideration. You highlight the notion that the best way to refute deplorable views is to debate them in the open. You may have self-censored by politely omitting that, sometimes, morally offensive views are true (Obviously, not Shockley’s, which every decent person agrees were both terrible and bad). But the Greeks put Socrates to death for corrupting the morals of the youth. Copernicus was labeled a heretic for discovering the earth moves around the sun. Larry Summers was also for suggesting there are differences between men and women – something which is likely true.

The pursuit of truth entails examining questions that may be morally offensive. If the moral fashion of the day makes asking certain questions or pursuing certain research off-limits, which it unquestionably does, then we consign ourselves to ignorance, social antagonism, and even violence. There remain stubborn questions about the cause of observable differences between various groups – in the US and across the world. The only ‘acceptable’ conclusion, which is tearing our country apart, is that bigotry is the sole cause. It might not be true, and our greatest minds are prohibited, not merely from researching it, but from questioning it. That every university has gone along with this is the true tragedy.

If you did self-censor, I do not fault you. There are important reasons people write behind pseudonyms.

Remember reading about how years ago the Jefferson Society invited among others American Nazi Party leader George Lincoln Rockwell and Communist Party leader Gus Hall to speak at the University. Back then demands came some members of the General Assembly that the Universitu administration or the BOV crack down on allowing such speakers. The University did not give in.
I think we can learn from that history. Its a slippery slope indeed when we start banning controversial speakers. Voltaire: I may not agree with what you say but I will defend to the death your right to say it.” And then there3’s that well known Jefferson quote we all are familiar with!

“All tyranny needs to gain a foothold is for people of good conscience to remain silent.” Thomas Jefferson

Bert Ellis has been a major practitioner of the “cancel culture” he supposedly decries now. When in 1975 the University Union co-sponsored Franklin Kameny, the father of the gay rights movement, with us at the Gay Student Union, Ellis as one of the tri-chairs of the UU group stepped in and with a bigoted and intolerant flourish pulled the co-sponsorship. So much for free speech. https://www.cavalierdaily.com/article/2022/08/ellis-denied-gay-student-union-co-sponsorship-request-as-student-archives-show?ct=content_open&cv=cbox_featured