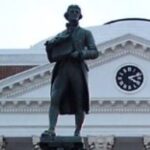 Note: This column is republished from The Washington Times.

A committee appointed by University of Virginia President Jim Ryan issued a statement this May outlining the university‘s policy on free speech. As befitting the university founded by Thomas Jefferson, a champion of individual liberties, the committee stated its unequivocal “commitment to free expression and free inquiry.”

The statement of abstract ideals was reassuring. The trick, as Mr. Ryan himself acknowledged, will be applying those principles in real-world situations. And that likely will be easier said than done. Mr. Ryan will have to challenge the university‘s culture of left-wing intolerance and expand the range of permissible viewpoints on such ideologically charged issues relating to social justice.

Faculty members addressing the committee recounted undergoing mandatory “training” sessions in which they were pressured to regurgitate officially sanctioned platitudes. Others spoke of reining in words that might be construed as micro-aggressions. Kenneth Elzinga, a popular economics professor who has taught more students than any other in the history of UVa, described students “who tell us they are afraid to express their views in the classroom.”

Sometimes the smack-downs come from doctrinaire faculty members. More often it comes from the students themselves. A militant minority enforces leftist orthodoxy through a social-media reign of terror. Nick Cabrera, a first-year member of the student council who took lonely conservative stands on several votes, was subjected to relentless insults and online harassment that would constitute a “hostile” environment anywhere else.

As a practical matter, enforcing the free-expression policy will mean standing up for conservatives and others who run afoul of UVa’s cancel culture. Before the Board of Visitors formally adopted the Statement on Free Expression, the administration was too timid — or possibly unsympathetic — to act.

In October Jeffrey Leopold, a Commerce school professor, repeated a joke found on the Internet that played off the stereotype of starving Africans as an example of something that global-thinking business people should avoid. Good intentions were no defense. Pilloried by the Twitter Outrage Mob for his supposed insult, he was forced to apologize. The administration left him twisting in the wind.

Around the same time, fourth-year student Victoria Spiotto organized the Young Americans for Freedom in support of the Supreme Court nomination of Amy Coney Barrett. Vandals twice tore down banners she had hung — with official permission — in the amphitheater. The administration made no effort to track down the offenders, and Spiotto could never get an audience with Ryan or any other senior administrator. Yet when a young woman residing on the Lawn, part of a World Heritage architectural site, posted a large sign stating, “F— UVA,” the administration acted to protect her right to free speech by assigning student ambassadors to safeguard the sign. Ryan even granted the woman an interview, which she recorded and posted on social media.

Potentially the most disturbing of all was the account, contained in a lawsuit against the university, by Kieran Bhattacharya. In a panel discussion about micro-aggressions, the med school student persistently but politely challenged the speaker’s premises. His deviance from acceptable discourse offended several attendees. A professor filed an Orwellian-sounding “Professionalism Concern Card,” which triggered an administrative review. One thing led to another, and Bhattacharya was twice hospitalized for psychiatric treatment against his will, suspended from med school, banned from trespassing on the UVa grounds, and then ultimately dropped from the program. Insisting that Bhattacharya had mental health issues, med school officials say they acted appropriately. Whatever the truth, there is no disputing that the sequence of events began with his challenge to orthodoxy.

The irony here is that Jefferson was a famous proponent of free speech. “Truth is great and will prevail if left to herself,” he wrote in 1779. Errors cease to be dangerous when “free argument and debate” are permitted to freely contradict them.

A newly formed organization, The Jefferson Council, is dedicated to preserving the Jeffersonian tradition at UVa, in particular the expression of free speech and expression. We urge President Ryan to extend his free-speech commitment to conservative students and faculty. Meanwhile, we are forging partnerships to bring conservative speakers to the grounds, and we are building a network of students, parents, and alumni to identify violations of the free-speech principles. We will bring them to the attention of Mr. Ryan, who has been oblivious to the plight of conservatives. To ensure he stays on task, we will make sure the public is informed as well.

Great editorial, Jim. You nailed it!

As an old UVA graduate, it seems to me that TJC is trying to push the University back to the 1950s when I was a student. I detect an effort to make the University great again. At least you have not set your goal on the 14th century as the Taliban have done.