DEI for Thee But Not for Me 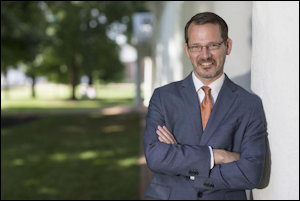 On Jan. 16, the University of Virginia announced that Provost Liz Magill had been chosen to serve as the president of the University of Pennsylvania. The same day, President Jim Ryan announced her replacement, Ian Baucom, dean of the College and Graduate School of Arts & Sciences.

Baucom had been widely praised within the UVa community for modernizing the College’s curriculum, but his sudden elevation to the No. 2 spot in the administrative hierarchy prompted a strong reaction. Faculty members wondered why the provost position had not been subject to the usual Diversity, Equity & Inclusion hiring practices — advertising the open position, creating a search committee, diligently considering minority candidates — required to fill other job openings.

In the student newspaper, The Cavalier Daily, economics professors Amalia Miller and Sarah Turner addressed Ryan’s circumvention of the normal hiring process in order to hire a White male. They wrote:

The University has in place carefully considered policies to foster equity and excellence in hiring at every level, which have evolved from the days when students and faculty were exclusively white and male. Of particular importance in this context is the University’s Office of Equal Opportunity and Civil Rights, which maintains policies to ensure that candidates from diverse backgrounds are considered at all levels in University hiring. The departure of the University’s first female provost seems an inopportune moment to appear to set aside goals of improving diversity, equity and inclusion. It raises questions about the nature of the University President and Board’s commitments to these goals — are they contingent and followed only when convenient?

Five days later, Ryan met with 40 members of the faculty senate to explain himself.

“I chose not to do a search for two interrelated reasons,” Ryan said, as reported by The Cavalier Daily. “First, because provost is a unique position in my view, and second, because there were unavoidable time pressures that required me to act quickly.”

Several factors entered into his decision-making, Ryan said. First, the relationship between president and provost “is an intense one, and for it to be successful you have to be able to work together.”

Second, as the University resumes full functioning at the two-year mark of the COVID-19 epidemic, Ryan said he thought it unwise to halt momentum while conducting a search. Finally, Ryan said that Baucom was being heavily recruited by another school to serve as provost. He appointed Baucom quickly to avoid losing him.

“You may not agree with that way of proceeding, but that’s what led me to do what I did,” Ryan said. “I’m sorry if this has caused some of you to doubt my commitment to shared governance — I believe in it deeply. I hope that over the last three and a half years, Liz and I have demonstrated that we believe about it deeply.”

Some professors weren’t buying it. As Miller and Turner had noted in their Cavalier Daily column, in other critically important positions at UVa, such as the Dean of Students, interim leaders were put into place while searches were ongoing. “Why forego an interim appointment in this case?” they asked.

In the faculty meeting with Ryan, economics professor Maxim Engers questioned the departure from standard procedure, which is designed to ensure equality of opportunity. “The kind of hiring that we have to do is constrained by lots of rules and we fully understand their purpose — to ensure things like equal opportunity and to ensure that people from diverse backgrounds are included in the search,” he said. “To hear that those principles are something that can be given up in circumstances like that is something that just amazes me and my colleagues.”

Ryan did not seek Board of Visitors approval for the Baucom appointment. The last board meeting was held in early December, and the next is not scheduled until March 3. To date, no board member has publicly commented on the  appointment.

Baucom was appointed as College dean in 2014 by then-president Teresa A. Sullivan. Like Ryan, Magill, and Law School Dean Risa Goluboff, he is a graduate of Yale University. He has executed Ryan’s vision to make the University of Virginia “good and great” in Arts & Sciences, the largest college at the university. A central part of the program has been implementing Ryan’s “Inclusive Excellence” framework for making the College more diverse, equitable and inclusive. Under Ryan, UVa has made a commitment to Diversity, Equity & Inclusion a formal and explicit part of the process for hiring, training, evaluating and promoting employees.

UVa’s Office for Equal Opportunity and Civil Rights has a web page describing the university’s recruitment and hiring process. It states as a primary objective the “equitable and unbiased treatment of all candidates in accordance with … the values and mission of the University.” It calls for increasing the diversity of applicant pools. It calls for the hiring process to adopt “equity-mindedness” and to “interrupt bias.” It suggests that search committees include an “equity coordinator” whose job is to “mitigate the impact of implicit bias.” And it provides for compliance reviews to ensure, among other goals, that the university broadens the p0ol of qualified candidates “to include women and members of underrepresented groups.”

Official procedures are written in anodized language that pays lip service to merit. They don’t reflect the way the hiring process actually works in practice, in which the desire to hire minority candidates can explicitly exclude White males from the get-go on the basis of their White maleness. The intense pressure to hire anyone other than a White male is what makes the Baucom appointment all the more arresting.

Bacon’s bottom line: UVa hiring practices apply to everyone but President Ryan. The justification he offered for short-circuiting the usual hiring policies when hiring Baucom — they work well together, time was tight, the need for continuity during the COVID epidemic — could apply to any department at UVa. The problem isn’t that they were bad reasons. They were perfectly good reasons. But Ryan’s faculty critics were right: he ignored the rules that apply to others — rules that were implemented on his watch — when it was convenient for him to do so.

Sometimes rules have to be broken and this is definitely one of those times.

The hiring rules imposed are fraught with discriminatory hypocrisy. Those that make the rules are quick to condemn anyone that is not compliant but are the first ones to rationalize why these rules do not apply to them.

Like masks?
Would you believe it possible, from a friend, in one of the donor suites for football, that our illustrious President came in and remained unmasked?
Un-possible, right?