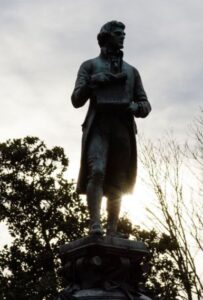 University of Virginia President Jim Ryan has stated that, as long as he holds office, the Thomas Jefferson statue in front of the Rotunda will remain in place. UVa’s founder, he says, will not be de-memorialized.

Talk is cheap. When given a golden opportunity to publicize Jefferson’s contribution to religious freedom — the 2019 publication of “Liberty in the Things of God: The Christian Origins of Religious Freedom” — Ryan took a pass. Neither he nor the administration’s propaganda organ, UVA Today (AKA UVA Pravda), have made mention of this important scholarship by Robert Louis Wilken, a UVa professor of the history of Christianity.

Wilken traced the origins of religious freedom to Tertullian, an early Christian later deemed a heretic. Jefferson’s personal copy of “Notes on the State of Virginia” has a quote from Tertullian written in the margin, in Latin, on the page where Jefferson expressed his beliefs about religious freedom. Wilken discovered that Jefferson held the Tertullian book in his personal library, which he bequeathed to the Library of Congress. When Wilken was permitted to see this ancient (1686!) manuscript, he found a large “X” in the margin by the same passage, which was underlined. Evidently, Jefferson’s intellectual curiosity had led him to explore the origins of religious freedom. Wilken traces that Christian line of thought from Tertullian through the Enlightenment to our Founders and Jefferson.

Jefferson famously said he wished to be remembered for three things: drafting the Declaration of Independence, founding the University of Virginia, and authoring the Virginia statute for religious freedom.

UVA Today has profiled hundreds of UVa scholars and students over the years. Search the website and Wilken appears only once in the results — in a Feb. 6, 2013, article listing more than 60 UVa authors who published books in 2012. You will find zero mentions of “Liberty in the Things of God.”

Search UVA Today for “Jefferson + slavery,” and you will find 162 search results. Query “Sally + Hemings,” and you’ll get 23 results.

Today at UVa, Jefferson is remembered by many as a slave holder and a rapist. He was indeed a slaveholder. Rarely mentioned is that he also opposed slavery, fought to end it, and was severely constrained legally in his options for freeing his own slaves. As for Jefferson fathering three children with his domestic slave Sally Hemings, never noted are the facts that the only Hemings child with Jefferson family DNA was born in 1808 while T.J. was president – and the DNA was not necessarily his.

Ryan might protect Jefferson’s statue, but I see no sign that he or his minions are defending Jefferson’s monumental reputation. How can such a man call himself the president of the university Jefferson founded?

Excellent insight and points made, Mr. Smith. It is clear that as to the three accomplishments Jefferson specified on his tombstone, the first two embodied the spirit which then led to the success of the republic as currently enjoyed. The third of his accomplishments, our University, has never achieved on a national scale the success he envisioned. Could it be that while coming last in his life he and his fellow revolutionaries did not have the time to fully lay out the plan to achieve that goal? As alumni who love the University we have and are now witnessing the ongoing insanity on Grounds. Mr. Bacon in the immediately previous article laid out the governing structure that poses a daunting task as to eventual eradication of this leftist insanity. The Achilles heel as to preventing the University from achieving Jefferson’s intentions is clearly centered on the reliance on one person in that position as president. Too much power in the hands of one. No real checks and balances. And too much to be expected for one person to handle. Ryan is doing his best and I believe has good intentions, but it is immediately apparent he equivocates, appeases and comes across as weak and feeble. This only serves to embolden the insane elements. Jefferson and his contemporaries enjoyed a collegial and civil exchange of ideas from which to formulate and put in place a successful republic. Looking back at previous University presidents I do believe they would have appreciated having input from outside the University as to confronting the entrenched intellectually incestuous groupthink cult culture that eventually led, for instance, to Casteen being held hostage in Madison Hall. The adjustment made in response to that incident is currently a video doorbell on the locked doors to the entrance to Madison Hall. A bandaid on a much deeper problem.
So, would it not make sense to determine a plan to present as to changing the governance structure at UVA so as to eventually effect what Jefferson had hoped as to the University? Or do we just sit back and do nothing while this insanity plays out so openly and blatantly before our eyes. Jefferson’s statue removed from NYC 3 days ago, seminars on Jefferson suppressed and protested at UVA, the Newcomb Hall bookstore prominently promoting insane leftist indoctrination books, and sure enough yesterday on a visit to the Monticello gift shop formerly always seen Jefferson inspiring items now removed and not available. Is it not time NOW to act and seize the opportunity to once and for all employ and effect reason at the University as Jefferson had so hoped in order to secure going forward the University’s preeminent place in educating future generations to lead and ensure the success of our republic for the future well being of our children and theirs as we have so enjoyed?

Yes it is. Great summary. Hope you’ve joined The Jefferson Council because what you propose is exactly what we are doing:
https://thejeffersoncouncil.com/join/.

Thank you Wahoo74 for reminding me and making the suggestion. I have done so and am now on board financially as well. I would suggest and urge any other alumni who love our University who may read this to likewise consider fully joining.

I am less charitable towards Jim Ryan’s benign intentions. Personnel is policy and his personnel picks give me no warm fuzzies.
And you are right about the power and money. UVA has over $14 billion tucked away in various tax-exempt foundations. That is a huge amount of money to hire and fund, and who really oversees that and the direction of the University?
I am gathering more info on that governance and intend to pose those questions backed up with real data.

I did pause as to writing as to his “good” intentions but having met with him recently and posing rather rudimentary questions on subjects such as identity and its role in wisdom, and then awareness as applied to leadership, he was simply baffled. This led me to conclude his intention may be to do good but he is simply in over his head as to how to effect his so called “great and good” agenda. We have seen that when there are those inflection points where he has the opportunity to act with bold and visionary leadership he simply falls back to the weak habit of conformity that characterizes the woke orthodoxy of present day so called “higher ed,” of which he is obviously a product. As Mr. Bacon earlier related the present BOV is of no help whether by Ryan’s design in league with an obviously weak outgoing governor or by way of an inherent governance structure which has never served to effect Jefferson’s vision.
Three years ago I posed this very point to the late Jerry Baliles in a Madison Hall meeting in connection with relating to him my summary conclusion that nowhere on grounds as an alumnus could I presently find reason being employed in the manner Jefferson clearly intended. The former governor’s response, “well, it’s always been this way.” I was stunned. So no real intention to fulfill Jefferson’s vision. Hopefully Governor Youngkin has Jefferson’s intention at heart. But I would rather look to changes in governance structure to go forward when Youngkin’s term expires. UVA certainly has the funds now to effect Jefferson’s vision as to reason vs. the present lunacy. One would hope Ryan has an eye to his legacy and how he will be viewed. Casteen certainly put in place the requisite physical structures but all for naught if filled with feckless faculty and administrators with no regard for truth and reason as Jefferson had hoped.
Mr. Smith, I very much look forward to the info, data and ideas on governance you may bring to light. Your labors in this are much appreciated.

Well done! Mr. Jefferson’s image is an integral part of the University for many reasons and deserves to be honored accordingly. Mr. Ryan’s resolve can go wobbly under pressure. Witness the Hira Azher case and the appalling language posted on her Lawn door. He failed to enforce student discipline in her case and under pressure may well cave in the case of the Jefferson monument in front of the Rotunda too. Sadly, I am not holding my breath.

Jack, please join our group The Jefferson Council: https://thejeffersoncouncil.com/join/. What you propose is exactly what we are fighting for.-

MG50 I agree wholeheartedly. Please join our group The Jefferson Council: https://thejeffersoncouncil.com/join/. We are fighting for precisely what you propose.