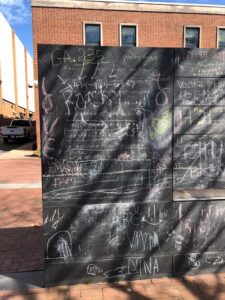 The Committee on Free Expression and Inquiry heard more than 20 students, professors, alumni and parents during an hour-and-a-half “listening session” May 4, but did not respond to questions or concerns.

University of Virginia President Jim Ryan created the Committee on Free  Expression and inquiry in February after bitter complains from alumni, students, and a faculty members that conservative voices on the grounds were being stifled by social-media harassment and an administration that vacillates between indifference and hostility. He tasked the committee to craft a long-term set of values to which the University should adhere.

“Increasingly, constructive criticism of the way things are going is really frowned upon, particularly around curriculum and the fact that in particular cases the standards are being significantly lowered to encourage ‘broader participation,’” said computer science professor Andrew Grimshaw. “When you attack those discussions, you’re basically attacked as either racist or as delivering microaggressions on the rest of the faculty.”

“I think that if we do have a statement that really does portray the University of Virginia as being a place that wants to have a marketplace of ideas, in the Jeffersonian tradition … it’s really important that it not just be a statement, that it be marketed in some way to have a brand identification,” Elzinga said. “Not just for faculty to understand it, and not just administrators to understand it, but for students to understand.”

Whitney Murphy, a parent and alumnus of the University, said her her daughters and their friends feel like they cannot express their opinions in class.

Third-year Batten Student Ryan Alcorn said he hoped that the committee’s final statement would not solely reflect the political ideology of the donors. “Being criticized for holding offensive ideas isn’t legal censure, but it is a central [tenet of] the marketplace of ideas that ideas that are offensive and wrong will lose to ideas that are better,” he said. “I really hope that the University of Virginia’s statement will recognize the difference between widespread and public condemnation among students of ideas that we find offensive and the legal consequences for that speech.”