No CRT to See Here. Move Along Now. 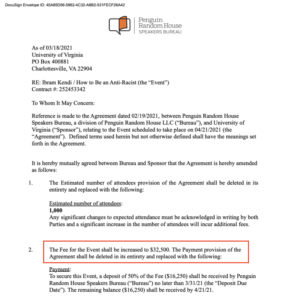 The University of Virginia paid $32,500 to Critical Race Theory popularizer Ibram Kendi to discuss “racial equity” for an hour. The university contracted with Penguin Random House Speakers Bureau, according to an agreement obtained by The Daily Wire through the Freedom of Information Act.

“The University of Virginia welcomes speakers from a broad array of perspectives to our Grounds every academic year and we often do pay speakers fees or other compensation,” UVA spokesperson Brian Coy told The Daily Wire. “Offering our community access to a diverse set of speakers and points of view is an important part of our academic mission.”

Let’s see the list of speakers with diverse points of view.

Three conservatives speaking at UVa during the current academic year included National Review editor Rich Lowry and Texas congressman Chip Roy in an “In Defense of Thomas Jefferson” program, and former congresswoman Mia Love discussing her personal journey. It is true that UVa permitted those events to be held on the university grounds. But speakers were paid for by The Jefferson Council (with which I am affiliated) and the Young America’s Foundation.

There may have been a handful of right-0f-center speakers who played less prominent roles in conferences or panel discussions. The only prominent non-leftist I can think of is Jonathan Haidt, a former UVa social-psychology professor of moderate political views best known as co-founder of the Heterodox Academy.

Other 2020-2021 series speakers were thinkers who have argued America is systemically racist, including Duke University professor Eduardo Bonilla-Silva — a sociologist who has claimed that America has normalized “the standards of white supremacy.” A separate contract obtained by The Daily Wire shows UVA’s diversity, equity, and inclusion division sponsored Silva’s November 2020 Zoom event for $10,000.

The obvious follow-up question is this: where did the funds come from to pay for the speakers?

As I recall, when this event occurred, both of the local K-12 school districts co-sponsored it, so if you live in Charlottesville (as I do), I presume you were part of the grift via your tax dollars.

At least the university is not paying people to attend this brainwashing session as Akidmore College …$740 per attendee.