Is It Even Possible to Get More Lopsided Than This? 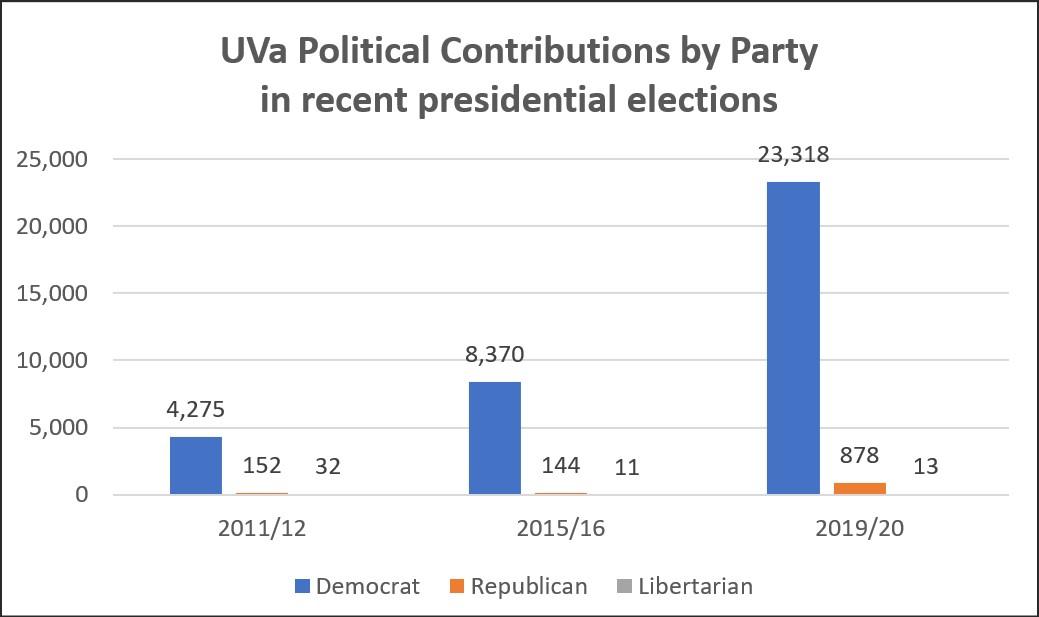 Two years ago, University of Virginia President Jim Ryan issued remarks outlining his vision for making UVa an institution that is both “great” and “good.” In his view, a critical strategy for achieving that goal was recruiting and retaining the “best people,” whether students faculty, or staff.

“To do this we must – absolutely must – be a community that is diverse, inclusive, and equitable,” he said. “Diverse because talent exists all around the globe and within every demographic, and because the very best ideas emerge from the consideration of diverse viewpoints and perspectives.”

UVa had ceased being an institution that valued politically “diverse viewpoints and perspectives” years before Ryan came on board. But while he has made modest progress in boosting the demographic diversity of the institution during his first four years in office, he has done nothing to help expand the range and diversity of thought.

To the contrary, Ryan’s signature initiatives will assuredly squeeze out whatever remnants of viewpoint diversity might remain. On matters of social justice — the most consuming controversies of our day — UVa is fast approaching the intellectual diversity of 15th-century Spain under Grand Inquisitor Tomas de Torquemada. Call it “Inquisition Lite” — heretics aren’t burned at the stake.

My collaborator Walter Smith compiled the data in the chart atop this post from Federal Election Commission (FEC) data. The chart compares the campaign contributions from faculty, staff and anyone else listing the University of Virginia as their employer for the presidential elections of 2012 (Obama/Romney), 2016 (Trump/Clinton), and 2020 (Biden/Trump). He classified donations to campaigns and PACs by partisan affiliation (omitting only a few that he could not identify). Note: the statistics reflect the number of donations, not donors;  some donors contributed multiple times.

The lopsided nature of political contributions is a relatively recent phenomenon. Smith’s reckoning showed much more partisan balance in earlier elections. Also, in fairness to UVa, there is nothing unique about Mr. Jefferson’s University. Smith’s calculations showed comparably skewed ratios at Virginia Tech, James Madison University, and the College of William & Mary, all of which are buffeted by the same prevailing ideologies and trends as UVa. (The least lopsided of the institutions he examined was Washington & Lee University, where 15% or so of donations went to Republican candidates and PACs.)

There is roughly zero chance that the ratio of contributions at UVa will change. Under the banner of “diversity, equity & inclusion,” Ryan has implemented the so-called “Inclusive Excellence” framework in which job applicants and employees undergoing annual job reviews are required to write “diversity statements” describing their commitment to diversity, equity & inclusion. Furthermore, employees of many departments must undergo “training” sessions in which employees undergo self-analysis and self-criticism for their privilege and racism.

It is far from sufficient for a faculty member or employee to declare a vision of a color-blind society in which everyone is judged by the content of their character. Such a view, according to DEI orthodoxy, is now deemed racist, sexist, homophobic, etc., as the case may be, for individuals’ failure to acknowledge their own complicity in perpetuating systems of oppression and for their failure to embrace “anti-racism,” “anti-sexism,” etc. to overturn those systems.

Scholars and staffs who do not share the social-justice paradigm face the choice about lying about their views and mouthing DEI pieties or revealing their heresy and being punished accordingly. The academic culture at UVa, as it is at many universities, is so hostile to conservative values and thought that few conservatives would think of pursuing an academic career. The diversity-statement litmus test will assuredly filter out the few who are intrepid enough to try.

The Baby Boomer generation of faculty and staff enjoyed some intellectual diversity, but as that generation of tenure-protected scholars retires, the new generation that replaces it at UVa will be a monoculture as pure as Torquemada’s Catholic Church.

I am conservative but would be distressed by an equally disproportionate amount of Republican votes. University Administrators truly exhibiting intellectual diversity would be appalled by this. The fact that President Ryan is not distressed by these voting biases says volumes.