Optional SATs Are Here to Stay 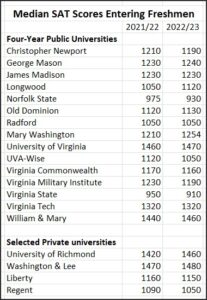 There are two broad trends driving change in the admissions policies of higher-ed institutions these days. The first is the declining number of students enrolling in colleges and universities. The other is the increasing philosophical commitment to increase demographic diversity, which in practice means admitting more “under-represented minorities.”

Arising from the second trend is an attack on standardized tests such as the SAT and ACT exams, which were designed to predict student success in college, as racist because they reflect subtle bias against minorities and create inequitable outcomes. Indeed, the very concept of using objective, meritocratic, non-race-based criteria has been criticized as inherently racist.

The last thing elite higher-ed institutions want to do is speak honestly about their intentions. Openly abandoning the meritocratic ideal or establishing racial quotas would create a furor. Instead, admissions offices create proxies for race/ethnicity such as raising the percentage of “first time” students (students who are the first in their family to attend college), or favoring applicants who overcame personal adversity, or recruiting students from a wider range of neighborhoods.

In the effort to engineer preferred demographic profiles of the student body, admissions officers find that mandatory SAT scores are an embarrassment.  Invariably, when median SAT scores for racial/ethnic groups are published, they show that Asians have the highest scores by far, suggesting that their bar for admissions is much higher than for other groups. Conversely, Blacks and Hispanics have lower SAT scores, indicating that their bar is much lower. SATs, once used to open up elite schools for Jews and minorities, now are viewed as an obstacle to social justice.

But colleges and universities still need SATs, if only to help distinguish the more meritorious members within each racial/ethnic classification. So, the optimal solution is not to do away with SATs, but to make them optional. And that is exactly what has happened in Virginia.

Almost every public university has made SATs optional. The shift to optional SATs was justified initially by the COVID-19 pandemic: a nod to students who were too wary of the virus to take the exam in public places. The COVID epidemic receded in severity this year, but mandatory SATs were not restored. It’s not clear if they ever will be.

Now that SATs are optional, a not-insignificant percentage of students applying to college are not submitting them. A reasonable conjecture is that the students who decline to submit their SAT scores are doing so because the scores are not competitive. Such behavior is entirely rational on their part. Median SAT scores are readily available on the Internet. There are even websites that allow students to enter their scores and calculate their odds of admission.

With lower scores being weeded out, one would anticipate that median SAT scores among those students who do submit them will trend higher. And that’s what we see in several instances in Virginia’s colleges and universities. As shown in the table above, based upon newly published data from the State Council of Higher Education for Virginia (SCHEV), median SAT scores increased at George Mason University, Longwood University, Old Dominion University, Mary Washington University, the University of Virginia, and the College of William & Mary, although most gains were marginal.

Meanwhile, SAT scores dropped precipitously at a number of institutions, most notably Norfolk State University, Virginia State University, and the University of Virginia-Wise campus — all of which serve lower-income student populations — and the Virginia Military Institute, which has suffered waves of negative publicity over alleged racism and sexism. The explanation for that, I hypothesize, can be attributed to the first of the two trends I mentioned above: the declining number of students enrolling in colleges and universities. Under pressure to keep up enrollment numbers, these institutions are being less selective in their admissions policies — SAT scores be damned.

That’s not a hard-and-fast conclusion. We’ll get a better feel when SCHEV publishes a separate data set on admission and acceptance rates. If it turns out that those institutions are admitting nearly everyone who applies, we can consider the hypothesis confirmed.

Meanwhile, the U.S. Supreme Court is due to reach a decision regarding racial preferences at Harvard University and the University of North Carolina. It is widely thought that the conservative justices will declare unconstitutional policies that clearly discriminate against Asians. But there are many ways to skin a cat. And if higher-ed institutions want to racially engineer their student demographics, there are more subtle ways to do it. We’ll be hearing a lot more about “holistic” admissions policies in the future.

Holistic policies may have some — dare I use the word — merit. There is something to be said for admitting students who show grit in overcoming adversity, even if their SAT scores are less than stellar. And there is a meritocratic case to be made against legacy admissions, which give preference to sons and daughters of alumni. In the end, I don’t expect the Supreme Court ruling to settle much. As long as the culture wars rage, admissions offices will find ways to admit whom they wish, and SOL scores will remain optional.

Thank you for an insightful article, Jim. Racial discrimination is the most destructive of multiple radical policies that leftists have nearly-universally inflicted upon our colleges. It is unpopular amongst citizens, contrary to our core principles, and harmful to all parties it touches.

The expected SCT opinion striking it down will not solve anything. The experience of CA post prop 209 proves that. Colleges have means of fulfilling their racist agenda through more subtle means. And doing away with standardized tests eliminates the one objective way available to prove what they are doing.

The solution is for the citizens, through their board(s) of trustees, to reject use of race in admissions and assure the retention of objective standards, like the SAT. That way, we can audit the admissions process and hold administrators, who really are fiduciaries to society occupying positions of trust, accountable for racist policy.

A flagship university that took steps to assure the integrity of its admissions and a true commitment to diversity of thought would find itself as a magnet to talented students and professors. Governor Youngkin and Bert Ellis seem to recognize the significance of issues like this.

We are abandoning objective standards across the board.

Should any of the DEI graduates who got in on anything other than merit enter the Finance field where I toiled for 40 years, they’ll be in for a very rude awakening unless they can meet or exceed annual sales goals. It is a very unforgiving environment. You perform according to very objective quantitative criteria or eventually you are fired.