“Our Life Is Always Threatened” 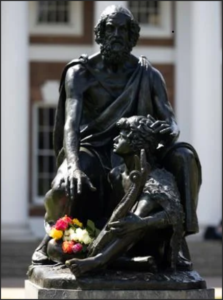 Last week an unidentified White man draped a noose from the statue of Homer at the University of Virginia. Without any evidence of the perpetrator’s motive, University Police and President Jim Ryan promptly proclaimed the incident a hate crime. Yesterday, a group of 60 or so students gathered near the statue of the ancient Greek poet to protest racism and White supremacy, and The Daily Progress, Charlottesville’s newspaper, was there!

In the resulting 19-paragraph story, the newspaper gave full voice to the protesters’ rhetoric without a single dissenting view.

“For Black men and Black women here on this campus and in this country, our life is always threatened. There’s always a noose around our neck,” said one Black UVa student organizer. “This is nothing new for us. I was hurting, especially when it first happened.”

“It is critical that Black students feel both safe at the University of Virginia, but also feel empowered to claim this university as our university,” said a statement of the UVa Black Student Alliance read to the group.

Continued The Daily Progress: “UVa professor and community activist Dr. Jalane Schmidt spoke to the group about the racist history and imagery of the noose, which was once a key tool in violence against Black Americans. The noose remains a threatening symbol of racially charged violence.”

No word on how the other 25,000 or so students and grad students at UVa reacted to the incident.

Apparently, the reporter did not see fit to ask an obvious question: how is it racist to hang a noose on the statue of an old dead White man?

Nor did the reporter delve into why a Black person attending UVa might feel that his life is “always threatened.”

For context, it might be useful to know how many Black UVa students have been assaulted or killed by racists recently. It might be informative to know how long ago the last altercation between a Black student and city police occurred. But, no, the heated rhetoric went unchallenged. The Daily Progress article treated it as self-evidently true.

If the individual who placed the noose on Homer is ever caught, it could turn out that he did have racist motives. But if the history of many other supposedly racist incidents is any guide, his motive might have been to stir up agitation over racial injustice. Both explanations are plausible. And, based on the evidence available to the public, there is no way to know which one might be right.

But you can count on the campus radicals — following the lead of the Ryan administration — to act on the presumption of racism. And you can count on the local journalists to do the same. Once upon a time, journalists were trained to be skeptical, to ask questions, to solicit different sides of a story. That kind of journalism appears to be dead at The Daily Progress, and it is increasingly rare elsewhere.

We have reached the point in the far left racists conversation in which any opportunity or chance to “spin an event” to gain political or financial advantage is joyfully grasped. While I did not enjoy studing Homer….putting a noose around his neck is not in anyway a racist event. However it is an opportunity for Jalane Schmidt to vent her spleen and for the black students of UVA to write letters seeking funding from the University and their own space in Necomb Hall. Just as the officers of the Black Lives Matter Organization raked in dollars to buy themselves houses the black students at the University seek all the dollars they can grab and any opportunity to do so.

as a 1968 graduate of the University i totally agree with Mr Newcomb and others As a Sociology and Anthropology Major I find those disciplines have become so WOKE.Rushing to judgment that a noose around Homer is absurd. BLM was a farce.No country has done more for minorities etc rhan the US If you feel the University is racist then leave.Stop ring out as a victim,

I don’t know of anything that might consider Homer a Racist.
He wrote of Greeks and Trojans, both white, but he didn’t to my knowledge mention blacks or African culture. Maybe the perpetrator received a bad grade on a quiz on Greek literature? This incident just goes to show the fact that those espousing racism and White Supremacy may not be particularly bright. On the Village Green in Guilford Connecticut is a memorial statue of a UNION infantryman commemorating the gallantry of the 1st Connecticut Regiment which participated in some of the bloodiest battles of the Civil War on the side of the abolitionists. Since the George Floyd killing, it has regularly been splotched with RED Paint. As if the perpetrators believe a statue of a soldier with a Kepi must be a white supremacist even though those honored lost their lives in defense of the UNION and for black freedom. This incident with the noose on the statue of the Greek Poet Homer, and its escalation to be considered a racist hate crime just goes to show how idiotic this whole situation has become.