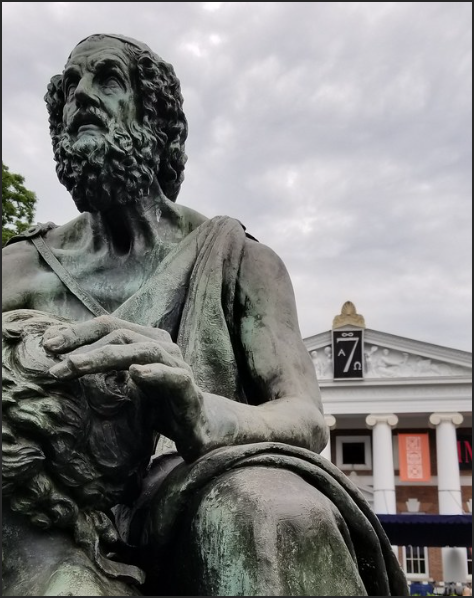 Around 11:15 p.m. last Wednesday, a White male dressed in dark clothing climbed the statue of the blind poet Homer on the grounds of the University of Virginia and hung a noose around its neck.

The next day University President Jim Ryan declared the incident to be a “hate crime” and vowed to track down the perpetrator. Ryan said he wanted to assure every member of the UVa community that he was “working to keep you safe and to make the University of Virginia a place where everyone is welcome” regardless of race, religion, sexual orientation, or political ideology.

“A noose is a recognizable and well-known symbol of violence, most closely associated with the racially motivated lynchings of African Americans,” Ryan said in a prepared statement. “The combination of those factors led University public safety officials to determine that this incident met the criteria of a hate crime and that a community alert was required.”

Proclaiming the incident to be a hate crime seems premature. Given the facts available, I would not call it unreasonable to suspect that noose might have been meant to intimidate African-Americans — let’s call it a working hypothesis — but one must ask, if someone is trying to send a racist message, why hang the noose around the neck of an ancient Greek poet? Why not hang the noose from a tree branch? Or vandalize the shrine to UVa’s slave laborers? 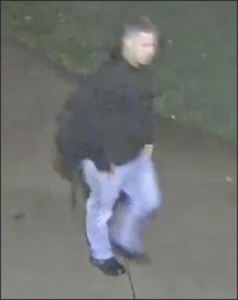 Photograph of suspect released today by the University of Virginia police.

What concerns me here is that the many in the UVa community nurture a sense of victimhood and paranoia, traced back to the Unite the Right rally in 2017. Many at UVa, to purloin a phrase from the days of the Red Scare, see racists under every bed. Indeed, they seek out evidence of racism that confirms their world view in which White supremacists and quasi-fascists represent a growing threat to the nation.

This conspiratorial world view is at odds with reality. As African-American scholar Wilfred Reilly has abundantly documented, there appears to be a far greater demand for racist incidents than the supply, therefore, hate crimes must be concocted. Does anyone recall Jusse Smollett’s disproven claim that MAGA-hat wearing Whites assaulted him at night and hung a noose around his neck? Reilly has documented dozens of hate-crime hoaxes on college campuses, the most Woke institutions in the nation, where the craving for proof of racism is the most intense.

On the other hand, as another old saying goes, just because you’re paranoid doesn’t mean they’re not out to get you. Occasionally, campus hate crimes are real. My point is not to dismiss the possibility that the Homer noose was a hate crime but to sound a note of caution. We know nothing about the perpetrator, other than his race, much less his motive.

Was the perpetrator a student or grad student, or was he an outsider? We don’t know. Does his ideology skew to the left or to the right? We don’t know. As I recall, the White supremacists who marched through the University grounds the day before the Unite the Right rally bore tiki torches, not nooses. The noose, one can argue, plays a much more prominent role in contemporary leftist iconography.

Take, for example, the paint-splattered Jefferson Davis statue, toppled from its plinth on Richmond’s Monument Avenue, displayed in the Valentine Museum in downtown Richmond. 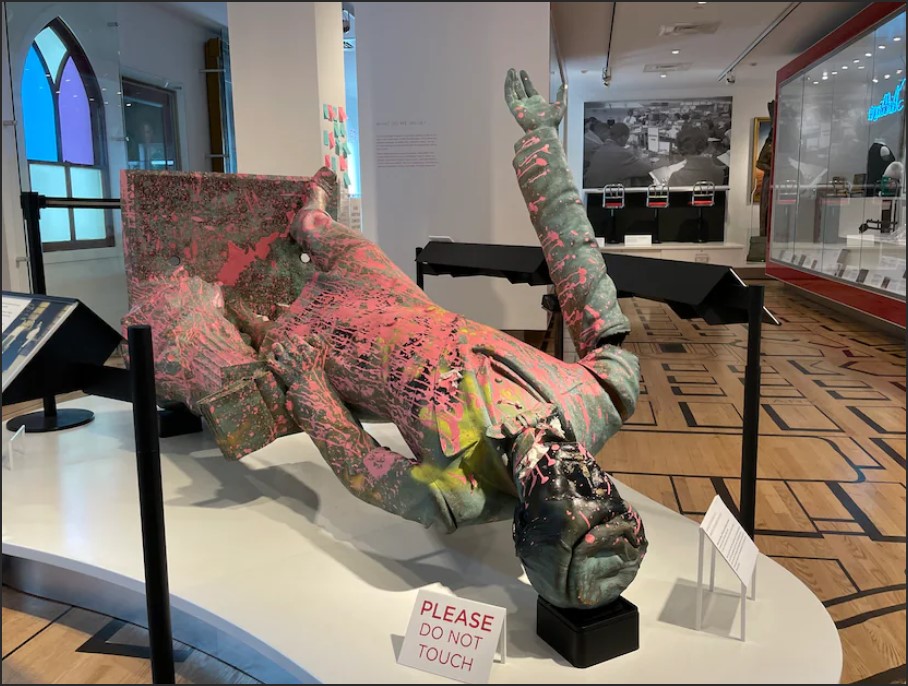 The text accompanying the Virginia Public Media article says the following: “Tufts of toilet paper clump to the pink paint around his neck, where a noose placed by protestors formerly hung.”

The left has appropriated the imagery of nooses as something to be applied (symbolically) to White racists and, perhaps by extension, to any and all memorials to Western Civilization. As author of two of the oldest and most revered works in the Western canon, Homer epitomizes “whiteness.” Was the intended message an expression of contempt for Western Civilization? Such an explanation is just as plausible as the allegation that the noose was meant to intimidate Blacks. The point can be argued back and forth endlessly without resolution. The fact is, we don’t know.

Ryan doesn’t know either. Until the perpetrator is apprehended and questioned, there is no way we possibly can know. Sadly, Ryan jumps to the conclusion that the act was motivated by racism. The suspect is presumed guilty of racism until proven innocent. As a consequence, Ryan has fed a sense of grievance and alarm among African Americans at UVa that may prove to be unjustified.

I don’t know the answer. Ryan might be proven right in the end. But until he is, the UVa president should stifle his impulse to signal his virtue, keep his presumptions to himself, and let police do their job.

I would agree that this administration is eager to engage in “virtue signaling” as it would seem is also true as to the general student body. Since a prior post, involving the false statements relating to Bert Ellis, we now have Gibson Brothers v Oberlin College in the Ohio Court of Common Pleas. Much as with the student body at Oberlin…a lot of non-factual things were said about “Gibson Brothers” …a lot of non factual things have been said and published about “Ellis” in recent weeks. Oberlin …after several appeals…now owes “Gibson” $31 million in damages. While I do not advocate the UNIVERSITY as a target of a suit as an idea…taking a run at the student body in whole or in part might be a way to convince the young people you SHOULD NOT spread false facts in this country. Certainly about someone who seeks only to do what is right for the Univeristy.

Hmmm…..exactly what crime is this purported to be?

Really? A “Please Do Not Touch” sign for a statue that has been desecrated?

Ryan is so far left, I wouldn’t put it past him to have planted it there so he could then criticize it. That might be going too far — but he certainly wouldn’t pass up the opportunity to make a press release about racism — he loves to push that narrative! He gets paid well to orchestrate these shenanigans. It’s harder for him to drum up racism from the 8/12 Lee statue debacle anymore — the one where the police were told to stand down and antifa was introduced to instill violence. Defund Ryan!

As we head towards the Nov. 8 midterm elections we can expect more of the same from all components of the left, including Ryan types, who will jump at the first notion of such to spread racist hysteria, exaggeration and hyperbole. Witness the recent disproven racist Duke v. BYU volleyball incident.
What truly reflects poorly on UVA is that Ryan as president and as a lawyer himself should know better than to issue such a statement without having the facts in hand.

Then again Ryan has not been averse to manipulating the truth as he did in an address to alumni in June when he claimed absolute success with his ill conceived vaccine mandate. The CDC on its official website at the time clearly stated that the core objective of any vaccine is to stop transmissability and infection. UVA students last year experienced a high infection rate but Ryan pivoted and claimed success as he related no student was hospitalized. Well duh! It is well known that of all affected populations those of college student age, whether vaccinated or not, rarely if ever are hospitalized. Classic leftist pivot. I wonder if he came up with that propaganda piece or one of his leftist advisors or faculty.

I look forward to statistics as to vaccine injuries occurring as a result of his mandate and how that will play out.

Last month Jim Ryan addressed incoming first years and told them to “be curious, not judgmental.”

Ryan will make anything and everything racist. Stuff that has nothing to do with racism, is racism. Pedophilia which he should care about. Nope. Not concerned about that. It’s just kids right. Ryan probably thinks the kids like the sex. He’s a bad man Ryan is. If he were good, he would not have jumped to a false conclusion so quickly. It’s because he wanted it to be racist. that’s why. Just like his handlers want him to be.