Red Brick or Limestone for the Temple of Democracy? 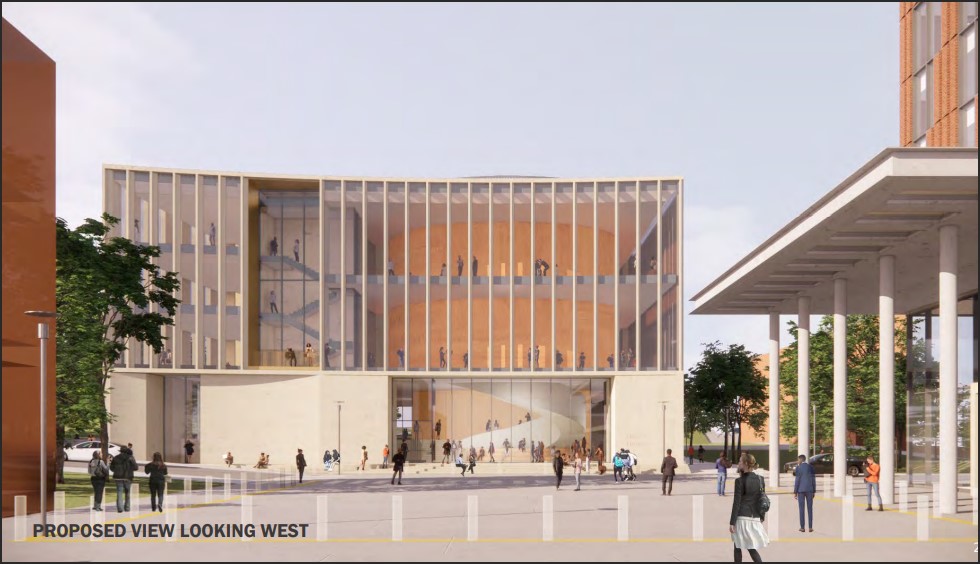 Preliminary draft design for the Institute of Democracy building on Ivy Road.

The University of Virginia’s newly formed Karsh Institute of Democracy will be housed in a signature building, a key part of the Ivy Road corridor in Charlottesville that will include an Olympic sports center, the football program, the School of Data Science, a conference center, and structured parking. Expecting to invite world-class speakers to the venue, UVa officials want the building to make a memorable architectural statement.

In a presentation to the Board of Visitors last week, University Architect Alice J. Raucher walked board members through the thinking behind the preliminary design. Thematically, the architects sought to link UVa’s founding ideals while looking ahead for the next 200 years and highlighting the university’s “global identity” as a forward-looking institution, she said. The signature staircase was inspired by the Oval Rooms in the Rotunda, and the window panels by the classical columns of Thomas Jefferson’s academical village. The design also is meant to communicate the “message of democracy” by being a “welcoming, inviting, inclusive” place that is “open and transparent.”

Some board members liked the design. But it left others cold.

“The building is a beautiful building, but it has nothing to do with the University of Virginia,” said board member Bert Ellis in the first response to the presentation. There is nothing in the design to tie the building to the rest of the UVa grounds, where the dominant motif is red brick.

A robust discussion ensued about the merits of red brick, reflecting a long-running tension between those who wish to make bold, forward-looking architectural statements with UVa’s new buildings and traditionalists who want to maintain thematic continuity with Jefferson’s world-renowned design of the Lawn and Rotunda.

The Board’s background materials said that the 65,000-square-foot building is “envisioned as an ecosystem of spaces designed to support scholarship and engagement around the challenges that face democracy.”

The four-story building will feature a 425-seat state-of-the-art auditorium that will allow events to be hosted in-person and broadcast globally, as well as classrooms, a media-production suite, meeting space, and research areas. The building will “encourage impactful collaboration” between the Karsh Institute, the Batten School of Leadership (which will occupy 17,500 square feet), and other groups on the Grounds.

The design team is Howeler + Yoon and Hanbury Architects, which designed the university’s Memorial to Enslaved Laborers, and the project has incorporated input from the Karsh family whose $50 million contribution was critical in funding the Institute.

Some board members said the use of limestone instead of red brick helps the building stand out. “I thought it was a phenomenal design,” said Stephen P. Long.

“I happen to like the building,” said Rector Whitt Clement. “I think the building should be different. It should catch the eye.”

Former Congressman L.F. Payne said he thought the design stays true to the Jeffersonian tradition. At the same time, he said, the Ivy Road Corridor is a new “precinct” of the university and should be allowed to have a distinct identity.

Louis Haddad, the CEO of Armada Hoffler Properties in Hampton Roads, offered the strongest voice in favor of the design. Iconic buildings invariably stir controversy, he said. He can see the building hosting world-class events, such as presidential debates. “Opportunities to do something of international renown don’t come along very often. Don’t blow it by compromising.”

“A building designed by committee will be a mess,” he added.

But other board members shared Ellis’ reservations.

Carlos M. Brown said the design reminded him of brutalist architecture, referring to a post-World War II modernist movement that critics reviled as soulless. “I don’t feel that [the building] is the temple of democracy.”

“I admit to liking brick,” said President Jim Ryan. “You want an iconic building,” he said, but the design should should have “echoes of the Rotunda.” He asked Raucher if the architects could “play around” with the design a little, incorporating red brick as an element.

All the other buildings on the corridor will be built of red brick, Raucher said, and it is a “reasonable request” to ask the architects to submit revised designs.

Editor’s note: Bert Ellis is president of The Jefferson Council.

Thanks for bringing this up, Jim. I saw this debate live on the BOV meetings livestream link. I agree with Bert, Carlos Brown, and President Ryan.

I recall when I entered UVA thinking the Chemistry and Biology buildings didn’t fit in with the Rotunda, Lawn, and other buildings’ classical architectural themes. If you’ve ever visited Cornell, they have a “traditional” part of the campus and a “new age” 50’s/60’s portion which looks awful. This will be the same.

We are not building a new Carnegie Hall in NYC. We are building a huge center within eyeshot of the Rotunda that will look like a total aberration if completed as is. I hope the Board listens to the differing opinions and modifies the structure.

Also, conspicuously absent in the discussion is how the massive operating and personnel expenses that will be added to the UVA annual budget to support this $100 million investment will be paid for. Where will the revenues come from? Yet another tuition increase, UVIMCO investment earnings? Does the BOV think there is an unlimited bucket of money from parents and investments to pay for the endless increases in bureaucratic expenses?

Good for Ryan this time. I speak as an architect. The building should be contextual. In other words, it should fit into its surroundings. That doesn’t mean it should copy Jefferson’s design but rather it should complement, contribute to, and fit into the world-class architecture of the University and not stick out like a sore thumb. There are many buildings on the Grounds that do this. Gotta watch those architects.

I have to disagree with Mr. Ellis-it’s not just about bricks. IMO, that’s one ugly building. Worse than that, attributing of the current, almost mandatory list of “virtues” applied to most proposed public projects, seems to be an attempt to camouflage a sterile, minimalist design.

UVA is known for its beautiful campus and architecture. The proposed building is somewhat elegant, but not in the context of the campus. It must be terribly intimidating for architects to be asked to add to the beauty that has stood the test of time there. They need to honor the existing architecture.

The proposal does not fit with the prevailing architecture of UVA from which there is no reason to deviate. Mr. Jefferson set the tone and that is something that ties the University together.
Hire another architect with respect for this tradition.!
Michael and Rebecca Bromley, Law ‘70

Diminish the Honor Code; change the traditional architecture of the University, it’s all part and parcel with this uber-privileged generation’s hate of American tradition and what it has always stood for.

Agreed on the architectural observations, but world class facility and guest speakers are what we need with open discussion and not Marxist behavior. Many colleges have tried the mixing of architecture, and in virtually every case it is a bust. Still, it sits on campuses worldwide when the mistake should be acknowledged and the building replaced.