The Perry Family Lawyers Up 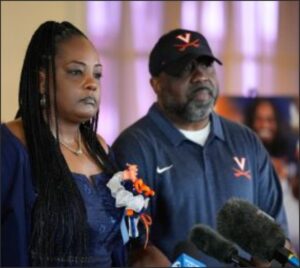 In a news conference yesterday the parents of D’Sean Perry, one of three University of Virginia football players slain in a mass shooting last month, called for changes to gun laws and faulted UVa for failing to boot their son’s killer off campus. Said D’Sean’s father Sean Perry: “(We want) to make sure another family will never, never go through this again.”

According to CNN, the Perrys said they wanted unspecified reforms to “gun laws” (CNN’s words), although it was unclear from the article what remedies they sought. “The red flags were there, and (the suspect) was still able to purchase a firearm,” said D’Sean’s mother Happy Perry. Here’s the background provided by CNN:

[Shooter Christopher] Jones was twice denied in his attempts to buy firearms – once in 2018 because he was under the legal purchasing age of 21 to buy a handgun, and once in 2021 due to a pending criminal charge, Dance’s Sporting Goods owner Marlon Dance has said.

But he was able to legally purchase firearms this year – a rifle in February and a 9mm pistol in July – Dance has said. It is unclear whether either of those weapons were used in the November shooting.

This year’s purchases were not prohibited because a court reduced the pending charge to a misdemeanor in October 2021, the Virginia State Police have said.

Jones last year was charged and convicted of a reckless driving and hit and run, and had a concealed weapons charge. He received suspended sentences for all of the offenses.

Assuming that’s an accurate summary of the germane facts, it sounds like the problem is not a need for new gun-control laws but a failure to punish violations of existing laws. One charge against Jones was reduced to a misdemeanor, and a concealed-weapons charge was reduced a suspended sentence. There may be more than meets the eye to the judges’ decisions, but a surface-level read of events suggests that Virginia needs a change in judicial philosophy, not changes in the laws.

The Joneses also faulted the University of Virginia’s failure to enforce its ban on guns on the grounds.

“[The university] could have removed him from campus well before this incident,” said the Joneses’ attorney Michael Haggard.

CNN summarizes the background as follows:

Before the shooting, Jones was the subject of a pending, gun-related case with the university’s judicial council, officials have said.

In that case, a student reported in September that Jones “made a comment to him about possessing a gun,” though that person did not see Jones possess a gun, university spokesperson Brian Coy has said. Jones “repeatedly refused to cooperate with University officials” and his case was escalated in October for further review and possible disciplinary action, Coy has said.

The school also was looking into Jones’ “failure to disclose” his misdemeanor conviction to school officials, Coy has said.

“We are exploring, looking at the University of Virginia’s responsibility here,” Haggard said. “Unfortunately, as you all know, due to federal preemption, right now, we’re limited in what we can do with a gun manufacturer or even this gun seller.”

Bacon’s bottom line: The Perry family has every reason to feel that the system failed their son. The failure occurred at two levels: the courts and the administrative machinery at UVa. The Perrys conspicuously wore UVa garb during the press conference, a sign that they still have positive feelings toward the university their son loved. But they have hired a lawyer, and the lawyer is “exploring” the university’s culpability.

The Perrys likely will have to wait the outcome of the external investigation into what UVa officials knew about Jones and why they declined to act. Sadly, it likely could take months before they can find some peace.

This is tragic, but I hope the University holds off until the authorities have fully investigated this crime. Given the few public details, it appears the gunman was specifically targeting these individuals — a crime of passion as opposed to a crime against the UVa community. Did the victims bully him, as the shooter’s father suggests? If so, implications for who has liability, and what, if any, amount is significant.