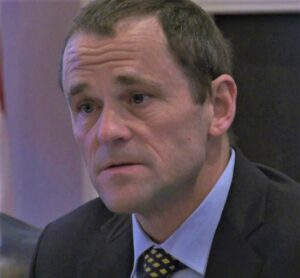 So far this semester, there have been three racial scares at UVa. First someone threw a rock through the window of the Office of African-American Affairs. Then someone laid a flag bearing an owl symbol next to the Enslaved Laborers memorial and donated an anonymous check to an African-American student. Then someone hung a noose around the neck of a statue of the blind Greek poet Homer.

The three incidents generated alarm about a “larger pattern of racially motived crimes” before the full facts came in. Upon investigation, the first two were found to have no racial motivation and significant doubt has been cast on racial hate as a motive for the third.

UVa officials deserve some credit for quickly releasing exonerating information as it became available. But rather than dampen unfounded speculation in his early remarks, Ryan legitimized it.

The rock-throwing episode was denounced as racist… until the rock thrower was identified as someone known to the Office of African-American Affairs and racism could be ruled out. The owl-flag incident was regarded with suspicion as an act of racial disrespect… until the individual involved was identified as a philanthropist who was trying in an odd way to honor the enslaved laborers. The Homer-noose incident caused the biggest stir. Police released a video of an unidentified White suspect. His race, combined with his use of a noose, fueled speculation that his action was racist…. until evidence surfaced that he had a very different motive.

The noose was discovered Sept. 7. The UVa Police Department — which had hired its first manager of diversity, equity and inclusion in 2021 and had implemented a new regime of DEI training — promptly declared the incident a racial hate crime, even though the perpetrator left no graffiti, letter or other communication to illuminate his intent.

Ryan adopted the police-department assessment without reservation. He, too, declared the incident a hate crime. “A noose is a recognizable and well-known symbol of violence, most closely associated with the racially motivated lynchings of African Americans,” he said in a prepared statement. “The combination of those factors led University public safety officials to determine that this incident met the criteria of a hate crime and that a community alert was required.” Ryan went on to assure members of the UVa community that he was working to keep them safe.

As I blogged at the time, the hate-crime theory begged the question of why someone wishing to intimidate Black people would place the noose around the neck of a dead White poet. The symbolism would have been much stronger if, say, the noose had been slung over a branch near the Enslaved Laborers memorial. Hate-crime hoaxes are commonplace in American universities today, I suggested, and the perpetrator could just as well have been indicting Western Civilization’s canon of works by “dead white men.” (I should have added that there could have been another explanation entirely, as it turns out there was.)

Regardless, the administration viewed the situation as serious enough to warrant calling in the Federal Bureau of Investigation to assist with the probe. The conviction that the Homer noose was an act of racial intimidation quickly spread. Many African-American students felt besieged. As one Black student told the Cavalier Daily student newspaper: “For Black men and Black women here on this campus and in this country, our life is always threatened. There’s always a noose around our neck. This is nothing new for us. I was hurting, especially when it first happened.”

For all the angst and fear the event inspired, the hate-crime proposition has been all but debunked. On Oct.22, the University Police reported that a “pile of items” had been found next to the Homer statue: two masks, a “civil peace flag,” a Christian cross, and a sealed envelope containing a letter.

The letter indicated that that the statue glorifies pedophilia, and that we “are all so blinded by hatred and racial division” that we “refuse to see the truth that is hidden in plain sight.”

The note goes on to say that, “If you live in reality you will see an old man with a nude adolescent boy in between his legs.”

The message did not contain language of racial, religious, or ethnic animus,

Three days later, Albemarle County resident Shane Dennis was arrested and charged with “intent to intimidate” by displaying the noose, which is illegal in Virginia. Notably, he was not charged with a hate crime, suggesting that law enforcement authorities regarded the pedophilia-protest motive as plausible.

So, what was Ryan’s reaction to the latest twist in the saga? He issued this bland  statement:

“We remain committed to ensuring the University of Virginia is a place where all can feel safe in the spaces where they live, learn and work. Although we are relieved that this suspect was apprehended, we will never stop working to ensure that this community is as safe and welcoming as it can be.”

Let that sink in. “We can all feel safe,” he said. Safe from what? Safe from threats to pedophiles? Safe from the knowledge that the incident was not racially motivated?

Presumably the latter. This was Ryan’s way of back-pedaling without apologizing for earlier describing the incident as a hate crime and contributing unnecessarily to the anxiety of Blacks throughout the university.

Two days ago I asked UVa spokesman Brian Coy if Ryan felt any regrets about his rush to judgment. I have received no answer.

Hate crimes are a real thing, but they are rare. According to the Virginia State Police Crime in Virginia 2021 report, 35 Blacks were victims of hate crimes in Virginia last year. More than 1.6 million Blacks live in Virginia. That works out to one hate crime per 46,000 Blacks. Not exactly an epidemic. Not exactly a reason for Blacks to fear for their safety. The heightened sense of paranoia at UVa stems not from real-world racial threats but the obsession with racial identity and the rhetoric of victimhood that pervades the university. Unfortunately, Ryan either shares that paranoia or is too timid to stand up to it.

Ryan wants to increase the demographic diversity of UVa. Apparently, he thinks he can do that by virtue signaling his determination to combat racial bias. Instead, what he has succeeded in conveying is that there is racial bias to be combatted and that Blacks at UVa have reason to fear for their physical safety. Why would any racial minority want to study or work at such a place?

My son graduated in 2002 – and I am stunned at what is currently happening. His roommates for 3 of the 4 years were: a young man from the Ivory Coast (Muslim); a young man whose family came from India; a young man who was a black gospel singer from the mid-west; and a frequent visitor/occasional roommate who was Chinese. They maintained their friendships after college, had a wide circle of friends, had zero negative experiences to my knowledge. The one thing that occasionally bothered me was seeing periodic self-segregation by groups of black students – but no animosity. Wonder why that’s changed? (Hint: I have my suspicions.)

The noose incident might very well have been an expression of bigotry. However, seems to me to be more a symbolic expression of hatred toward Western culture, literary tradition and thought – Homer was among the first of the long-dead “old white guys” who are the targets of those who would exorcise from our culture its historic, literary and intellectual core. The fact that the U’s administration puts up with the bigotry of those who hate our society makes me want to quote Ron White – but I graduated from the University of Virginia, and a gentleman wouldn’t do that.

Nice question, Jim. I hope you receive a response. This is exhausting. The leftist manic desire for white racial hatred is dispiriting. Every group engages in outgroup racist crime (whites to a much lesser extent than blacks, according to the DOJ). All of it should be condemned. None of it should be invented – that does not serve a productive purpose in a pluralistic nation.

Excellent article. I just hope that Mr Ryan is embarrassed and will see the divisive nature of his comments….but I doubt it.