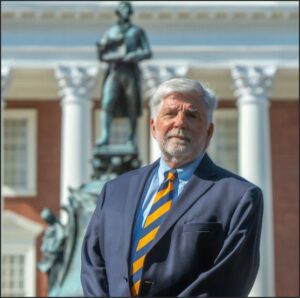 The University of Virginia Faculty Senate has voted to censure Bert Ellis, a Board of Visitors member, for violating the university’s “foundational values” two years ago when he “prepared to vandalize a protest sign” by a resident of the Lawn.

Ellis acquired a paint-scraper razor with the aim of removing a large sign that said, “FUCK UVA,” but did not act upon his intention when two student ambassadors (unarmed volunteer adjuncts to the university police) advised him not to.

The resolution expressed the Senate’s opposition to Ellis’ appointment to the Board and censured him for behavior “which neither reflects the Mission Statement of the University of Virginia nor fosters the safe space requisite for the free investigation, deliberation, and exploration of ideas.”

Ellis was one of four board members appointed in June by Governor Glenn Youngkin to the UVa Board, which was, and still is, dominated by holdovers from the Northam administration. A conservative businessman and alumnus, Ellis is president of The Jefferson Council, which is dedicated to protecting the Jeffersonian legacy at UVa, upholding the dignity of the Academical Village of which the Lawn is a part, preserving the Honor Code, and protecting free speech, free expression and intellectual diversity.

In passing the resolution, the Senate joined the UVa Student Council, the executive board of the Cavalier Daily student newspaper, and the Democratic Party of Virginia in calling for Ellis’s resignation. 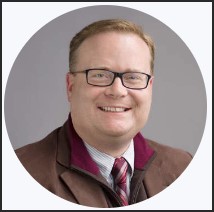 The resolution emerged from the Senate’s Diversity, Equity & Inclusion (DEI) Committee, and the case against Ellis was presented by committee chairman Eric Matthew Ramirez-Weaver. Ellis offered to appear before the board to present his side of the story, but his offer was declined. Although Ellis had no comment about the vote, I can express the sentiments of the Jefferson Council board, of which I am a member, that the resolution is a travesty.

The resolution condemns Ellis for something he thought about doing, not something he actually did. Ellis’s real offense was criticizing UVa’s DEI policies for trashing revered UVa traditions, imposing left-wing dogma regarding a wide range of social justice issues, and contributing to the suppression of free expression and free thought. The Senate resolution confirms the lengths to which proponents of the new orthodoxy will go to expunge anyone with dissenting views.

The Jefferson Council finds it encouraging, however, that a majority of faculty senators did not feel moved to vote in favor of the resolution. Those who voted against, abstained, or declined to vote at all numbered 47, compared to the 37 who voted in favor. 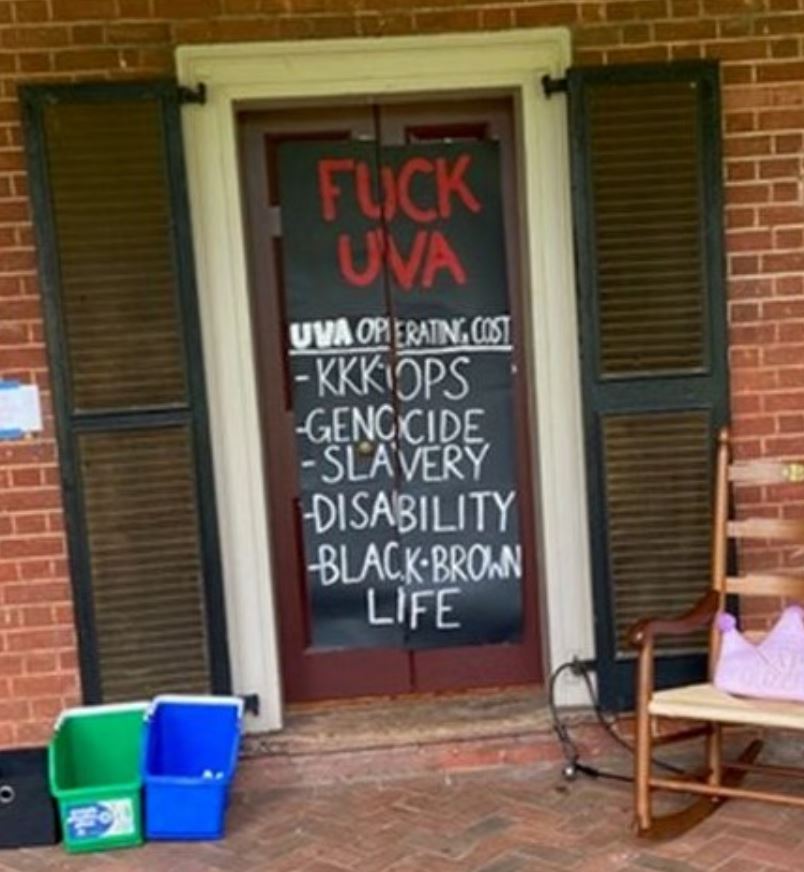 The episode in question centers on Ellis’ reaction to the posting of the FUCK UVA sign on the door of a Lawn residence. The Lawn and Rotunda are architectural masterpieces that comprise a United Nations World Heritage Site visited by tourists, prospective students and many others. Angered by the vulgarity and inappropriateness of the sign, Ellis purchased a paint scraper at a local hardware store, and went to the Lawn with the idea of cutting it down. He knocked on the door of the Lawn resident who posted it, Hira Azher, and tried to engage her in conversation. She closed the door in his face. He backed off his intention to cut down the sign when told not to by two student ambassadors, who said they had been assigned to protect it. Although the sign violated the terms of the student’s lease agreement, the administration cited free speech grounds for allowing Azher to maintain it for the duration of her lease. The administration began enforcing limits on door signs the following academic year.

The resolution reads as follows:

WHEREAS the Mission Statement of the University of Virginia states, “We are defined by: Our enduring commitment to a vibrant and unique residential learning environment marked by the free and collegial exchange of ideas; our unwavering support of a collaborative, diverse community bound together by distinctive foundational values of honor, integrity, trust, and respect;”

WHEREAS the Faculty Senate confirms our commitment to these principles;

AND WHEREAS, Mr. Ellis violated these principles when he came to the University of Virginia on Friday, September 11, 2020, prepared to vandalize a protest sign mounted by the student resident of East Lawn 36 with a razor;

THEREFORE, BE IT RESOLVED that the Senate opposes the appointment of U. Bertram Ellis, Jr. to the governing Board of Visitors of the University of Virginia;

BE IT FURTHER RESOLVED that the Senate censures Mr. Ellis’ behavior which neither reflects the Mission Statement of the University of Virginia nor fosters the safe space requisite for the free investigation, deliberation, and exploration of ideas.

During the Friday discussion nursing professor Kimberly Acquaviva built upon the “safe space” theme. “We cannot have a space in which people’s views are suppressed with someone yielding (wielding? Ed.) a razor blade,” she said, according to the CD. The CD coverage is not clear on the point, but apparently reference was made to SEC-030, a policy that prohibits the possession, storage and use of “any weapon,” including razor blades, during planned events or incidents such as riots within the Academical Village.

Law professor Rich Hynes said that the resolution did not provide enough evidence regarding Ellis’s conduct to justify the censure. If Ellis’s behavior violated weapons policy — which he doubted — then the focus should be on public safety, not the free of exchange of ideas, he said, according to the CD.

“The resolution doesn’t say that he actually vandalized the sign,” Hymes said. “It doesn’t actually even say any specific conduct that I think warrants a censure. If we pass this resolution, we’ll be opening ourselves to the criticism that the real motivation is that we object to Mr. Ellis’s political views.”

Full disclosure: The author is vice president-communications of The Jefferson Council.

Jeebus effn khrist! So much for freedom of expression and concern for the well-being of UVA as a businessman and president of the Jefferson Council. Does this mean that Ellis is out? Does he have any recourse? This is lunacy at its best.

The Virginia state senate must approve the governor’s appointments. There are enough sane Democrats in the Senate that we are confident that any move to reject Bert will fail.

Jim–does it require a 2/3 majority?

Splendid! And thank you for clarifying!

I would say “unbelievable”, but that is incorrect. This is entirely believable, and is indeed a travesty. If anyone has UVA in their estate plans, surely this will give them a big incentive to remove it. I have done so, as I cannot support a faculty so “woke” and the students it may attract. Ryan should speak out, but I doubt he will. If you look closely at Mr. Jefferson’s statue (while it is still there), you will see him shedding a tear. Hate to say it, but I no longer recognize this school. Very sad.

Forgive me, but I thought that there were rules for occupants of The Lawn that prescribed acceptable behavior regarding decorating the doors, and the woman in question violated those. Ryan refused to enforce the rules in a bout of misguided advice, so the face of the University was tarnished. Now we have an administrative body equally misguided. Pray for our University and an awakening of sanity.

Wokeism, cancel culture, safe spaces, trigger warnings and the like are antithetical to the development of strong self-reliant young men and women. Future historians will recognize this
pseudo-intellectual movement for the weak, frightened and tyrannical fad that it is. In the interim, those of us who support the traditional values of individual freedom and self-reliance must courageously resist this toxic groupthink at every opportunity.

I don’t know Bert Ellis, but he speaks for me.

So what happened to the perpetrator? Deface a World Heritage Site in some countries and you’ll wind up in a very nasty jail. In the 60’s Dean Runk would have sent the perp packing.

And so would President Shannon.

The restoration of UVA as a functioning university with a genuinely liberal culture must involve alumni calling for the termination of anti-Jeffersonian legacy faculty or administrators. I wrote a petition on this several years ago… Go Bert! https://www.change.org/p/president-teresa-sullivan-defend-the-university-defend-thomas-jefferson

Amazing that these faculty idiots are supposed to be capable of educating others, professionally and not inadvertently.

So, if any of you commenters know anyone on the BOV, then those people need to hear from you to insist on getting back to education. The school – in State – will be about $35k this year with everything. It should be about $10-15k less if UVA would cut out all the indoctrination admin and bogus courses.
Here is the BOV contact info…
https://bov.virginia.edu/visitors-staff

This is so sad. No more contributions from me!!!!

The administration should be removed for allowing the sign to stay. Had it not been for Bert Ellis we might have similar signs spread around the grounds. Hopefully Governor Youngkin will appoint more people like Mr. Ellis to the BOV.

Dear God in Heaven, what has our dear UVA become? I have already decided not to give any more money to what used to be a world-class institution of higher learning. And leave any of my hard-earned money to it? Ha. Not in this lifetime. At least not until there is a new president and a major shift in the culture of the faculty. Hopefully in a few years when the governor replaces more woke members of the BOV we will be able to see a shift in the direction the University is taking.

The DEI committee purported to support the censure based on Mr. Ellis’s qualification as a ‘representative’ of the faculty’s (our) community. He is not their representative. He represents the citizens of Virginia through the executive, subject to the consent of the state senate. The faculty are accountable to the board – not the other way around.

There is no one better qualified to know the will of the citizens than the governor they just elected. Any discomfort afflicting the (minority) of faculty senators that supported the censure reflects their divergences from the values of Virginia’s citizens. It should be resolved by such faculty acquiescing or putting on their grown-up pants. This is, as Professor Hynes surmises, a political disagreement, and the citizens have spoken politically.

This censure reminds me of the NYU professor who was fired by his students for grading too hard. It shows how badly our institutions have been captured by those who are supposed to be subject to the standards of the institutions. When that happens, we lose control of our institutions, and they become ineffective in fulfilling the purpose(s) for which we established them – like educating future citizens.

Yep. The faculty needs to stay in its lane and focus on TEACHING. Engaging in politics, especially right after the people of the Commonwealth spoke, undermines academic freedom because they are acting like babies. Continued behavior of this sort will lead to calls for the abolition of tenure, and maybe it is a discussion worth having. The people are the sovereign. The school does not belong to the faculty.
Joel Gardner was absolutely correct on the (Fig Leaf) Free Speech Committee that the policy should have been based on Kalven principles (no politics from the institution).

Punishing an individual for what he is thinking is very dangerous.

Bert is just what the Board needs. Should it even matter what the faculty senate thinks? They are not stakeholders of the University. If they’re unhappy with the governance structure, they can resign and go somewhere else. I presume most of them are at-will employees.

I was thinking the same thing. The only possible effect this may have is influencing the Virginia State Senate in their confirmation of Bert.