UVa Has Issues, But At Least It Is Not Yale 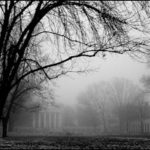 On March 10 the Federalist Society, a group promoting conservative/libertarian principles in law schools, hosted a panel discussion at Yale Law about freedom of religion and speech. About 120 student protesters descended upon the event, shouted down the speakers, and then, after repeated warnings, continued their noisy demonstration in the hallway. In the aftermath, more than 400 law students, about 60% of the student body, signed an open letter voicing support for the protesters and assailing the presence of armed police. While the protesters were excessively loud and “engaged in rude and insulting behavior,” wrote Law School Dean Heather Gerken, they did not violate the school’s “three-warning protocol.” Heated debate over the contours of free speech continues to this day.

At the University of Virginia, by contrast, the Federalist Society held a symposium on the topic, “The Federalists Vs. the Anti-Federalists: Revisiting the Founding Debates.” The event went off without a hitch. There were no protests, no open letters, and no need for statements by the dean.

The exercise of free speech and free expression leaves very much to be desired at the University of Virginia, but students, parents, faculty and alumni can console themselves: At least UVa is not Yale. (Which is fairly ironic, given the fact that President Jim Ryan, Provost Ian Baucom, and law school Dean Risa Goluboff all hold Yale degrees.)

The Ryan administration continues to pursue an aggressive “equity” agenda that includes rewriting the university’s history, to mandating Diversity Equity & Inclusion training, to requiring people to write “diversity statements” for job applications and employee reviews. Moreover, the radical sentiments given free play at Yale do exist at UVa — read the editorials in The Cavalier Daily student newspaper for abundant proof. But Ryan, Baucom and Goluboff have set a different tone in recent months by publicly supporting the principles of free speech and free expression.

Last year the Board of Visitors adopted a free-speech statement written by a Ryan-appointed board. When Republican Governor Glenn Youngkin delivered a speech at the Federalist Society event, Goluboff, a committed leftist, gave him a polite introduction. Ryan and Baucom recently penned a column, published in Inside Higher Education, opining upon the necessity of going beyond simply tolerating free speech to actually listening to others with different views. Putting words into action, Ryan will lead tomorrow a “conversation” with a panel that includes Emma Camp, who published a scathing op-ed in the New York Times about student self-censorship at UVa.

In the latest sign that UVa is not Yale, seventeen faculty members have published an op-ed in The Cavalier Daily chastising the CD editorial board for objecting to a scheduled speech by former Vice President Mike Pence, and the proposition, widely held in woke circles, that unwanted speech threatens the well-being of students to the point where it constitutes violence.

“What saddens us about the mindset of The Cavalier Daily editorial is its assumption that the editors should enjoy the freedom to say what they want but others with whom they disagree should not,” stated the letter, whose signatories includes such academic luminaries and legends as economic professor Kenneth Elzinga, political scientist Larry Sabato, and sociologist Brad Wilcox.

All of this represents a sea change from the atmosphere at UVa a year or two ago, where, to cite but one example, a medical student was issued a “professionalism concern card” for questioning the basis of the thinking behind “microaggressions.” The subsequent inquiry precipitated a series of events that led to his expulsion.

What is different today?

Have Ryan, Baucom and Goluboff spontaneously embraced views that depart from their peers at other elite U.S. universities, including their alma mater at Yale? Are they any less woke than other academics in their views regarding the alleged intersectional oppression of minorities, women, gays, and transgenders?

I cannot speak for what is in their hearts. But I will make this observation. The political environment here in Virginia is very different than it was a year ago. And UVa, as a public institution, is more accountable to outside forces than Yale, a private institution run by a self-perpetuating oligarchy and buffered from outside pressure by one of the world’s largest endowments. Team Ryan does not have the luxury of giving the figurative finger, as the Yale protesters did, to those who think differently.

I suspect that Ryan has been getting a heap of advice from Rector Whitt Clement and former Rector Jim Murray, both of whom are moderates in the culture wars: appointed by Democratic governors, adhering to old-school Democratic Party values, yet ensconced in the political mainstream. Clement, who is distressed by extreme manifestations of wokism, has warned Ryan that he cannot ignore the import of Youngkin’s election.

The election of Attorney General Jason Miyares has prompted a major personnel change at UVa. Miyares fired Timothy Heaphy, Ryan’s hand-picked university counsel, and intends to replace him with a career lawyer, most likely from the AG’s office. Meanwhile, Ryan has to contemplate the possibility that Youngkin will replace the entire Board of Visitors over the next four years with UVa alumni who are determined to uphold the principles of free speech, expression and inquiry, question his DE&I agenda, protect the Jeffersonian heritage that has been denigrated under his watch, and reverse the march toward leftist intellectual conformity.

The Jefferson Council (TJC), of which I am a founding member, also has worked to change the environment. In highlighting abuses of free speech and condemning leftist intolerance at UVa, TJC has created channels of communication that bypass the UVa and alumni association propaganda organs to inform alumni of what is happening. We have met with faculty and student groups, and we have told them we have their backs. Conservatives, libertarians, moderates and even traditional liberals now know they do not stand alone if targeted by the Twitter Outrage Mob.

UVa is not Yale. And it never will be.

Virginia may not be Yale, but its corporate model is pretty much the same: Make gobs of money by hitting on wealthy alums and doing private deals; condone disunity, hatred to others, disrespect for the United States and its history (as though any other nation in the history of the world has done more to defend political liberty and the so-called Rights of Man), and complacency in the pursuit of Knowledge (at least in the Liberal Arts). With a little more time and a continuation of the University’s dark age followership, it will become just like Yale in a few more years.

So once again we see as to the CD editorial board, in analogous fashion to the national media, choosing to serve the propaganda role for tone deaf and out of touch leftists. And in like fashion to papers like the NYT, WaPo, the CD now becomes a self discredited and disgraceful rag. Obviously not representative or emblematic of the general student body but rather products of leftist professors, such as you find in the media studies department and sprinkled around in other departments. All of which serve as a disgrace to our University.

Well said, Jim. As one of your fellow TJC founders, we can assure the readers that we will not rest until intellectual diversity and civility are fully restored on Grounds.