When “Words Are Violence,” Only One Side Gets to Speak 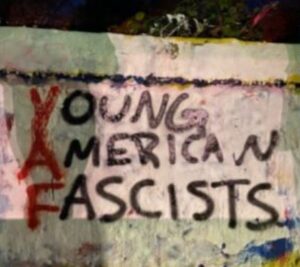 If you’re not woke, you’re a fascist.

Victoria Spiotto was brought up in a conservative, religious family of Italian descent in Loudoun County.  It was at the University of Virginia where she found her political identity as a conservative. One day in her third year, she was walking the grounds when she came across a Young Americans for Freedom (YAF) table displaying a 9/11 memorial. She found the club appealing, and started learning about thinkers to whom she’d never been exposed to before — the philosophers and thought leaders of conservatism. By her fourth year, she was leader of the club, determined to grow the organization.

Conservatives are mostly invisible at UVa, and they have few means of connecting. Spiotto wanted to let people know the group was out there, that YAF was a club where students of a conservative/libertarian stripe could find like-minded people and make friends. So, she began organizing a series of initiatives to get noticed. “It wasn’t a call to fight.” The idea, she says, was to “stand your ground. Don’t compromise on the truth you believe in.”

YAF now may be the most vilified student organization at UVa. The hostility is unrelenting. Spiotto and her buddies don’t worry for their physical safety. But left-wing students take down their signs and rain down vitriol on social media. Student Council leaders stifle dissent.

The experience of Spiotto and others highlights why conservatives feel unwelcome at UVa — although the intellectual climate is less inhospitable to free expression and free speech than at most elite universities. The 2020 College Free Speech ratings ranked UVa 6th of 55 institutions for free speech. Conservative students ranked it 10th best. But that’s damning with faint praise. Fifty-seven percent of UVA students surveyed still said they have felt reluctant to express themselves for fear of how a professor, other students or the administration might respond.

The incidents involving Spiotto and the Young Americans for Freedom never rise to the level where they attract media attention, but they do illustrate what campus conservatives contend with. The intolerance emanates mainly from other students. UVa administrators don’t pile on. Rather, they have just done nothing. Under pressure from alumni, however, President Jim Ryan in February appointed a Committee on Free Expression and Free Inquiry to identify “the role that free expression and free inquiry play in UVA’s academic enterprise and how they shape engagement with the ideas of others.”

The amphitheater incidents. On October 18, 2020, YAF acted to show its support for the Supreme Court nomination of Amy Coney Barrett. YAF members created posters, and published photos on social media. They generated hundreds of comments and re-posts, mostly negative.

“People were sending us ugly messages, threats, and directing other students to cyberbully us,” Spiotto says. Because YAF members were wearing COVID masks that hid their identities, someone tweeted others to “find out who we were.” 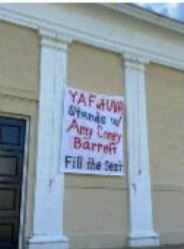 Undeterred, Spiotto and her friends obtained permission from facilities management at Newcomb hall to hang a banner at the amphitheater, a public space where students were allowed to erect proclamations as long as they received permission. YAF’s sheet-sized banner was spray-painted with the message, “YAF at UVA stands w/ Amy Coney Barrett. Fill the Seat.”

The banner went up Monday, Oct. 19. Tuesday morning, YAF members discovered that the banner had disappeared. Someone had replaced it with smaller signs reading, “Fuck YAF & Neo-Nazis and Homophones,” “Another Example of Conservative Hypocrisy,” and “Reproductive Rights Are Human Rights.'” 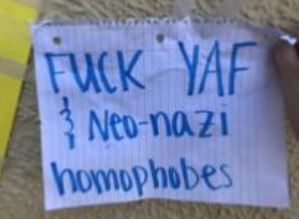 Spiotto immediately filed a police report and notified the administration at Newcomb Hall. The Director of Rotunda Operations and Events was very supportive, she says, and he personally removed the signs. “He expressed concern for what our club was going through and pledged to be a resource.” Also university police looked into the theft and social media threats. The perpetrators could not be identified because the principal amphitheater camera was not working. However, viewing images from other cameras, police did ascertain that three students approaching the banner were masked and wore black.

Spiotto submitted a second banner for approval, reading, “YAF at UVA Still Backs Barrett.” It went up the following Monday. This time, she told one of the university’s yellow-jacketed “ambassadors” that there was a strong chance someone would try to deface the banner. He responded that the amphitheater was not his responsibility. So, she went to the ambassadors’ office on the Corner. where she received a similar response. (Note: This is the same organization that had assigned two student ambassadors the previous month to patrol the Lawn and prevent anyone from taking down the infamous “Fuck UVA” sign.)

Around 11:45 that night, a YAF member went to check on the banner. He arrived just as someone was taking it down. His arrival startled the thief, who promptly fled.  From remote videos, it appeared that he was tall and had red, curly hair, but his identity was impossible to ascertain.

The following week, the spunky Spiotto got permission to put up a third sign, “It’s OK to Be in YAF at UVA. Conservatives Have a Voice.” This time the facilities manager hung the banner higher up the wall so it wouldn’t get stolen or taken down. This was the only sign that made it through the week unmolested.

The Beta Bridge incident. Painting proclamations on Rugby Road’s Beta Bridge has been a tradition at UVA since the 1970s. There are no formal rules governing the application of graffiti. Anyone can do it as the spirit moves them, and no subject is taboo. The only unwritten rule is to allow the latest work to remain in place at least briefly before painting it over with something new. 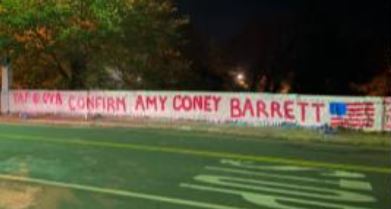 Spiotto decided to complement the banner in amphitheater with some slogans on Beta Bridge. On Oct. 21, Yaffers painted:

On the other side of the bridge, YAF painted: 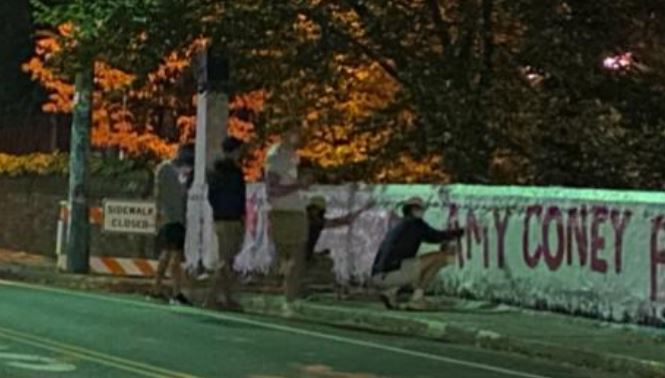 While YAF was at work, students drove by yelling and taking photos. Word went out on social media. One tweet said, “go cyberbully them.” 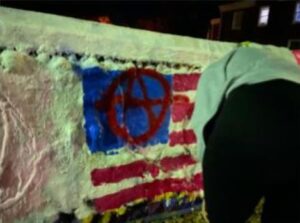 The YAF squad had just finished painting their messages, and most had left, when a group of six to seven painted over everything they had just done before the paint had dried. They replaced “Amy Coney Barrett” with “All Cops Are Bastards,” and they painted an Antifa symbol over the American flag.

Spiotto wrote UVa President Jim Ryan about the incidents. Although he had met personally with Hira Azher, the Lawn resident who posted the “Fuck UVa” sign that the administration deemed offensive but protected as free speech, Ryan did not meet with Spiotto. Instead, she conferred an hour with his chief of staff. She showed video and asked for an investigation into the student who took the banner down. The official made sympathetic noises but there was no follow-up.

The Jeffrey Leopold controversy. Another incident in October created a furor on social media. A Commerce School professor, Jeffrey Leopold, told a joke published on the Internet as a device to debunk stereotypes and encourage students to appreciate cultural differences. One of seven national/geographic stereotypes said, “In Africa they did not know what ‘food’ meant.” Someone took offense, outrage went viral, and within days, Leopold felt compelled to issue a public apology. But that was not the end of it. The UVa Student Council used the Leopold incident to advocate for a “strike system” to hold professors accountable for statements that students perceived as racist.

One member of the Student Council spoke out against the resolution. Nick Cabrera, a YAF member, had run for office as a first-year representative on a non-political platform. But the strike-system proposal troubled him. Everyone was entitled do due process, he said. How would the strike provision work? “It’s almost as if we’re transitioning into a climate of limited free speech.”

Cabrera was heatedly denounced by other members of the Council who essentially said that as a white person (his father is Puerto Rican) he had no standing to talk about racism.

As one student council member said, “It is very concerning that we have non-black people giving themselves agency to decide what is and what is not racist.”

Said another: “When black folks say shit is racist, believe them the first time.”

And a third: “I am mad, not because you disagree, Cabrera, I am mad because you use language that was simply gaslighting. And disrespectful. … Professors are people in power. They cannot be fired for the shit they can say to us. … [As members of the student council] we don’t speak for the professors. We speak for the students. Fuck those professors. They’ve got the power, they’ve got a job, and they’ve got tenure. … Words are violence.”

“Words are violence” is the excuse Leftists often give to shut down debate. The national YAF chapter posted highlights of the heated Student Council meeting on Twitter. The Student Council in November passed a resolution denouncing YAF for publishing “selectively edited” clips which “misrepresented” the discussion that took place. Republishing the quotes “incited violence.” The usual Twitter outrage against YAF followed., and one student representative, claiming that YAF was “radical and anti-black,” was so incensed that she  said she could no longer partake in her student council duties.

For this incident and others — Cabrera also abstained from a resolution condemning anti-Asian hate because it contained a clause calling for the defunding of police — some student council members called for his impeachment. The issue became moot when he ran for re-election to council and lost. But that’s another story…. 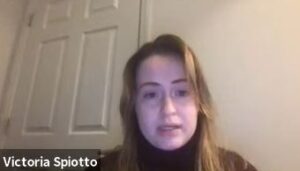 After the YAF “selective editing” incident, Spiotto began addressing council meetings during the open comment periods. One time she expressed her concern about the things said about YAF on social media. Another time she read a statement about ideological bias, saying, “It is time to be honest: you know that YAF at UVA did nothing wrong. YAF at UVA has not ONCE incited violence. You know that you have unfairly and unequally judged, ridiculed, and slandered the conservative community.” Council members ignored her comments.

Spiotto, Cabrera and their fellow Yaffers are highly motivated but they are few in number. “Most students don’t want to be vilified and misrepresented for their beliefs.” Spiotto says. “At UVA, like at most universities, one feels the need to stay quiet about the truth to avoid social ostracism.”

That’s not what UVa-founder Thomas Jefferson had in mind when he designed his academical village. But that’s the reality today.