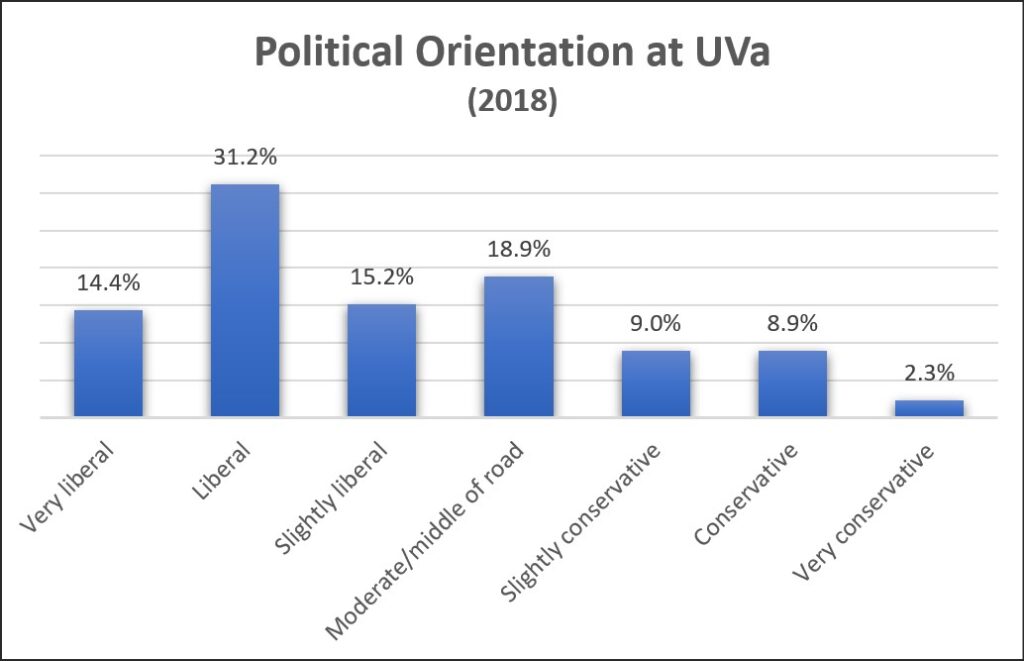 What does it tell you about the freedom of speech and expression at the University of Virginia when in 2018 one-fifth of the university community (students, faculty and staff) described itself as various degrees of conservative and three-fifths identified as various degrees of liberal — a three-to-one ratio — but two years later donations to Democratic PACs and candidates outnumbered those of conservatives by a 27-to-one ratio?

UVa liberals were nine times more likely to donate to Democrats than UVa conservatives were to Republicans. Does that describe the world you know?

What explains the discrepancy? Here’s a working hypothesis: people who described their political beliefs in a university-conducted poll, “The 2018 UVA Diversity and Inclusion Climate Survey,” retained their anonymity. They feared no retaliation. By contrast, anyone contemplating giving money to GOP PACs or political candidates are by law reported to the Federal Election Commission, and their contributions are public record. Such donors would have to weigh the possibility that they would be declared enemies of leftist academic orthodoxy and be set upon by the Twitter Outrage Mob.

The Jefferson Council, an organization on whose board I serve, has compiled abundant testimony, some public and some off the record, that many conservatives at UVa are afraid to openly speak their minds — and are especially fearful of transgressing the official doctrine on Diversity, Equity & Inclusion or its leftist, social-justice underpinnings.

The information we have gathered, though vivid, is anecdotal. However, the statistical disparity between political identity and political contributions gives credence to the idea that many conservatives at Mr. Jefferson’s University suppress the expression of their views.

The story behind the 2018 Climate Survey is an entertaining tale in itself, and I will provide details in a subsequent post. Suffice it to say for now that the survey was conducted April-June 2018 towards the end of Teresa Sullivan’s term as president but not released by President Jim Ryan until very recently, after my Jefferson Council colleague Walter Smith filed a Freedom of Information Act request to see it. Initially, UVa refused to release it on the grounds that the results represented proprietary research, and then Smith took the university to court. Suddenly, after four years, the Ryan administration decided to release the study with little fanfare. Apparently the proprietary nature of the research was no longer an issue. I’ll let you decide whether or not Smith’s dogged determination was decisive in shaking loose the document.

The Climate Survey polled more than 3,000 undergraduate students, 1,500 graduate students, 500 faculty, and 1,000 staff, and broke down responses by affiliation, race, gender, sexual orientation, religion, and political identification, among other factors. The survey designers were interested to find out how comfortable different groups were participating in the university community. I will detail the findings about race later. In this post, I focus on political identification.

One question asks respondents how comfortable they are, generally speaking, with the “climate for diversity and inclusiveness” at UVa. 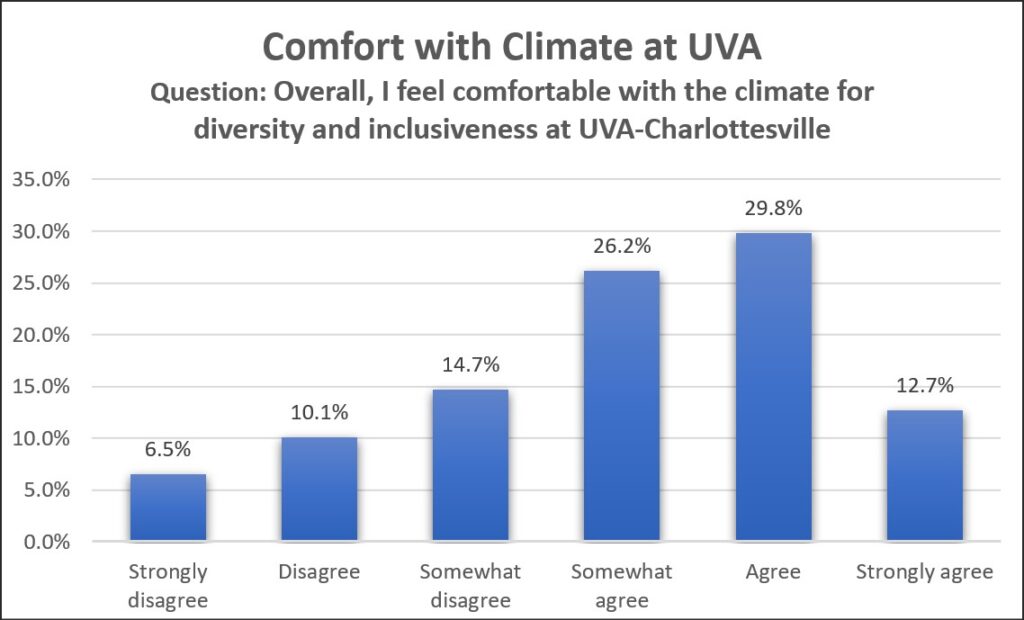 Overall, most people say they do feel comfortable at UVa, although nearly a third feel alienated to some degree.

States the study: “When political orientation is concerned, considering UVA-Charlottesville as a whole, the highest means were 4.40 and 4.41 for moderates and slightly conservative respondents. (That’s on a one-to-six scale from “strongly disagree” to “strongly agree.”)

The next question is why the very liberal and the very conservative would feel less at home. I would hypothesize that the two groups have very different reasons. Those who classify themselves as “very” liberal cultivate an ideology of grievance and victimhood. They view the world as an unjust place, teeming with racists and bigots, and they tend to see the university as tainted by systemic racism, sexism, and homophobia. They are ever-alert for microaggressions, and they take offense even when none is meant. Members of the far left are psychologically predisposed to feeling less comfortable in any setting, not just UVa.

That’s not the case with strong conservatives, who tend to be supportive of established institutions. But we should allow for the possibility that some regard UVa as an ideologically hostile left-leaning institution and that they, too, are sensitive to politically motivated slights and insults.

Probing deeper, the survey asked people to respond to the statement: “Individuals of my political beliefs are respected at UVA.” The one-to-six scale ranged between “strongly disagree” and “strongly agree.” The findings:

For the UVA-Charlottesville campus, the overall mean agreement on this issue was 4.63. But the mean was directly related to political views, with those reporting themselves to be liberal having the highest mean of 5.25, slightly liberal 5.17, and very liberal 5.02. Moderates had a mean of 4.45, while those who claimed to be slightly conservative had a mean of 3.51, conservatives 3.02, and very conservative individuals had a mean of only 2.25, which was significantly lower than every other category.

The mean response of “conservatives” and “very conservatives” was lower than that of supposedly “marginalized” women (4.73) African-Americans (4.12), gays and lesbians (3.98) and (TGQNO, or trans, genderqueer, non-binary, or gender non-conforming) (3.26).

Bacon’s bottom line: Very liberal respondents feel less comfortable than anyone else at UVa — but not because their political views were not accepted. By contrast, conservative students felt less comfortable at UVa because their political views are, in fact, less respected. The very conservative are even more uncomfortable on the UVa grounds than even the so-called victim classes of women, African-Americans, gays, and transgenders. If you find a “marginalized” student at UVa, he or she is most likely a conservative.

This is why I only donate to Hillsdale College. And only to them

I find it consistent with the University’s present anti-traditional bias thar the touted survey of alumni only included those of the past 50 years. Lessee; 2021-50=1971, coincidentally the year after it is considered to have become fully coed. It would appear that the U isn’t particularly interested with the opinions of its older alums.