With a $14.5 Billion Endowment, Are UVa Leaders Accountable to Anyone But Themselves? 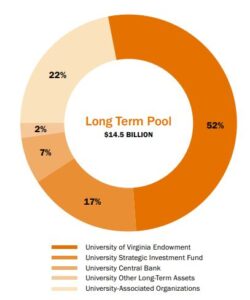 This graph shows how UVIMCO divvies up its $14.5 billion endowment from an investment perspective.

I’m not sure that’s a good thing.

On the one hand, powerful investment returns supports initiatives such as the recently announced allocation of $50 million dollars for merit-based scholarships and aid to needy undergraduate students. On the other hand, such spectacular financial performance — almost $5 billion in a single year — makes the university leadership less accountable to tuition-paying students and parents, to the Commonwealth of Virginia which funds millions in state support, and to alumni whose individual donations are paltry by comparison.

Come to think of it, I’m even agnostic on whether the $50 million in new scholarship money is a good thing or not.

Years ago Mr. Jefferson’s University set up UVIMCO as a professional investment firm with the goal of increasing returns on its endowment. The quasi-independent organization has been phenomenally successful. As CEO Robert Durden notes in the annual report, over the last ten- and twenty-year period, UVIMCO has generated annualized returns of 12.1% and 10.6% respectively, compared to 8.8% and 7.4% for a passive investment benchmark.

Last year was a blow-out performance.

UVIMCO divides the endowment into two main parts: the big $14.5 billion Long Term Pool designed to maximize returns over the long term, and a small, conservatively managed Short Term Pool of $161 million to get better returns on cash reserves with near-term liquidity needs.

A big bet on venture capital paid off handsomely for the Long Term Pool last year. Private equity (which includes venture capital) now comprises 26% of the entire portfolio. The investment return last year for that investment class was 98.7%. Publicly traded equities, accounting for 30% of the portfolio, were up 51.4%.

A Wall Street Journal article this morning highlighted UVa as a national stand0ut, along with the University of Minnesota, Duke University and Washington University in St. Louis (which achieved a mind-blowing 65% return on its endowment).

While a considerable chunk of the endowment is restricted to uses determined by donors, not all of it is. The unrestricted Strategic Investment Fund (SIC), which is part of the Long Term Pool, comprises 17% of endowment assets. Gains in the SIC create large sums for UVa administrators to spend as they sees fit. The UVIMCO annual report highlights how the endowment has advanced President Jim Ryan’s “great and good” vision for the university. Basically, that means investing in medical research, diversity & equity, and environmental sustainability.

As Bacon’s Rebellion has painstakingly chronicled, elements of the “great and good” agenda are highly controversial. A centerpiece of that agenda is the “Inclusive Excellence” initiative, which has pushed a leftist framework for looking at race and social justice into every school and department of the university. This initiative has accelerated the drift toward a left-wing intellectual monoculture, and it has stifled free speech and free expression.

As Bacon’s Rebellion also has explained, UVa, like other universities, is not a profit-maximizing institution but a prestige-maximizing institution. UVa’s leadership and governing board aspires to enhance the status of the institution nationally, which, as a practical manner means emulating private Ivy League universities like Harvard, Princeton and Yale. Given the prevalence of Yale alumni in the top ranks of UVa administrators, it might be more accurate to say that the leadership of Virginia’s flagship university thinks of Yale as the role model.

Private universities have become unaccountable and self-perpetuating cliques responsive only to their own internal constituencies. While prey to the same temptations, the leadership of public universities like UVa must answer to Boards of Trustees appointed by outsiders (Virginia’s governors), to elected representatives who determine the level of public funding, and to alumni, whose donations help pay for new projects and build the endowment. If UVa can rack up a $4 billion to $5 billion gain in its endowment in a single year, President Ryan has the latitude, should he choose to exercise it, to blow off legislators, alumni, and parents, and do as he pleases.

The fact that UVa has allocated $50 million for scholarships appears, on the surface, to be responsive to the general clamor about the out-of-control cost of attendance. In fact, it addresses the affordability problem for only a few — those who receive the scholarships. At the same time, liberality with scholarships allows UVa to perpetuate its high-cost, high-scholarship tuition-maximizing business strategy that soaks the middle class while perpetuating a bloated administrative cost structure.

You see, UVa is not discounting the tuition for poor students. It is simply transferring endowment funds to a scholarship program, which in turn covers the cost. The structure allows UVa operations to continue unimpeded free from pressure to squeeze the cost structure and make the university affordable for all. While cloaked in the rhetoric of helping the poor, minorities, and first-time college goers, scholarships enable the status quo.

If parents, students, alumni and elected officials want a university administration that is accountable to them, then UVIMCO’s spectacular performance may not not a good thing at all.