Woke Limbo: How Low Can You Go? 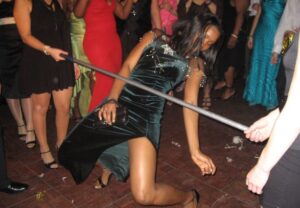 The bar for triggering Virginia Democrats gets lower by the day. The latest limbo contortion is a call by the Democratic Party of Virginia and the University Democrats at the University of Virginia for the resignation of Bert Ellis, a recently appointed member of the UVa Board of Visitors, who has yet to utter a single public word in his capacity as a board member. In a joint statement, the two organizations cite three particulars, each of which exceeds the other in triviality.

According to the joint statement, Ellis’ sins can be traced back to the 1974-75 academic year when he was chairman of the University Union, which put on concerts, brought in speakers and organized other events at UVa.

That year, the Union and Ellis held an event entitled The Correlation Between Race and Intelligence, featuring William Shockley, an unabashed racist, white supremecist (sic), and eugenicist. This event is a stain on the University’s past, especially due to the event’s intentional scheduling during Black Cultural Week. As the University continues to grapple with its history of slavery, racism, and eugenics, Mr. Ellis’ appointment is not only regressive, but also directly insulting to countless students and student organizations who have worked relentlessly to make Charlottesville more equitable.

Neither the Cavalier Daily, in its article raising the controversy, nor the Democratic Party, in its joint statement, acknowledges that Shockley, whose theories were widely circulated in the 1970s, was invited to debate Richard Goldsby, an African-American biologist. Neither Ellis nor the Student Union endorsed Shockley’s racist views; they invited public scrutiny.

If the Cavalier Daily, which rooted through its archives to gin up the controversy, had checked subsequent editions, it might have found that Goldsby did a superlative job at discrediting Shockley. Its editors might have discovered that the debate, far from being “regressive,” had the felicitous result of undermining a racist narrative that was widely held at the time. That’s how free speech and the open exchange of ideas work.

With its joint statement, however, the Democratic Party of Virginia now has signaled that upholding woke dogma is a greater priority than protecting free speech. Further, the statement makes clear that there is no statute of limitations for violating wokeness. Murderers in Virginia should be given a second chance in life — but not those who violate Woke dogma!

The indictment of Ellis continues as follows:

Nearly fifty years later, Mr. Ellis has yet to acknowledge the irreparable damage caused by the event and continues to espouse bigoted postulations, writing in 2021 that “The University is also overrun with courses that exist for no other purpose but to make a big deal about race and gender.”

Irreparable damage? Irreparable damage to whom? Civil Rights advocates in the 1970s weren’t snowflakes who melted at the first exposure to a disagreeable idea. The joint statement substitutes hyperbolic indignation for fact and logic.

As for Ellis making “bigoted postulations,” is it a mark of bigotry to observe that UVa now offers numerous courses, degrees and programs that study race, gender and equity from a social-justice perspective and exclude other points of view? The underlying truth of Ellis’ words are incontestable — indeed, the woke scolding to which he has been subjected itself constitutes vivid proof that such dogma exists.

In 2019, Mr. Ellis took it upon himself to fly to Charlottesville with the intention of removing a sign that criticized the University’s treatment of minority students from a Lawn room door with a razorblade. This overreach sets a concerning precedent surrounding student free speech, and continues a trend of hostile interactions with students from underrepresented backgrounds by Mr. Ellis.

One also might ask what “concerning precedent” was created by Ellis not cutting down the sign. Once again, the unforgivable offense is questioning leftist orthodoxy.

A reader asked why I was so obsessed in earlier posts with the scribblings of a few college newspaper editors. I was concerned precisely for the reasons revealed by the joint statement — it was clear to me that we were witnessing the opening salvos in a campaign of character assassination. Next will come a slew of newspaper articles and editorials about Governor Glenn Youngkin’s “controversial” appointment, in which all the have-you-stopped-beating-your-wife allegations will be recycled. Then will come the piling on from a handful of leftist politicians, who may or may not reflect the candid views of their moderate Democratic peers. If Ellis doesn’t submit by resigning, or if Youngkin doesn’t submit by firing him, we can expect an endless drip,,, drip… drip…

In truth, the joint statement tells us more about the Democratic Party of Virginia than it does about Ellis. Woke intolerance has leaped from the university into the mainstream political discourse. The Democratic party apparatus has assumed the role of thought police and enforcer of woke dogma. I suspect many elected Democrats will be uncomfortable with the party’s rhetoric, and I cannot imagine that enough legislators will find these allegations atrocious enough to reject Ellis’ appointment. But the controversy tells us where the Democratic Party is heading, and that is ample reason for concern.

Full disclosure: The author is vice president-communications of The Jefferson Council; Ellis is president.

The Administration should have removed the offensive sign when it first appeared and the offender, who blatantly broke the rules agreed to by residents of the Lawn, should have been kicked out of school immediately.

The dems will stoop very low to get just dems in. They will overlook sexual assaults of minors for dems, they will overlook a n illegal server- anything goes for the dems. But look at the outrage. Honestly if that’s the best they can do going back 50 years, this guy must be clean. Don’t step down

Hail Bert Ellis, defender of the First
Amendment and rational thought at
The University of Virginia.

Thank you for the head’s up Jim. The gubernatorial candidates conspicuously established the gain line in the debate over ‘identity’ essentialism during the election. A convincing majority of VA citizens chose Governor Youngkin. Then he prudently appointed Mr. Ellis. Do not see any reason the Governor would be moved by this petition. In fact, the dispute surely helps him with the majority that just elected him. Congratulations to Mr. Ellis. I pray he knows 13 more like-minded citizens that Governor Youngkin can appoint to the BOV. Their Commonwealth needs them.

“HOW LITTLE DO MY COUNTRYMEN KNOW WHAT PRECIOUS BLESSINGS THEY ARE IN POSSESSION OF, AND WHICH NO OTHER PEOPLE ON EARTH ENJOY.” Thomas Jefferson

I applaud Bert Ellis for standing up
for the First Amendment and for reason
and I believe Mr. Jefferson would also

The University Democrats and the Democrat Party of Virginia have an historical figure whom they emulate with their slanderous accusations about Bert Ellis. In case they have never heard of him, I suggest they read about the Nazi Propaganda Chief Josef Goebbels whose infamous quote was “If you tell a lie big enough and keep repeating it, people will eventually come to believe it.”

Bravo, ladies and gentlemen. You have adopted the same philosophical tactics of the National Democrat Party who fabricated the Russian collusion theory and created the bogus Steel Dossier, accusing Trump of treason.

You all lack any modicum of ethics, honor or integrity. I don’t know how you can look yourself in a mirror.

Nice to know there was a time when “to follow truth wherever it may lead,” as Jefferson spoke in his visionary statement as to the University’s purpose, actually allowed for robust debate in contrast to today where all topics must first be subjected to approval by the UVA woke orthodoxy groupthink cult. This leftist cult is a plague both on our University as well as our nation and must be eradicated sooner than later.