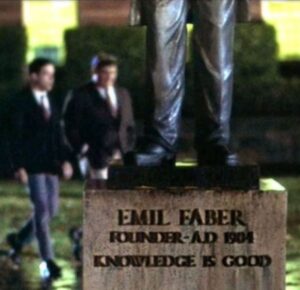 The statue of Emil Faber, founder of Faber College (of Animal House fame), bears a quote, “Knowledge is good.” The reigning philosophy at the University of Virginia, by contrast, seems to be, “Only some knowledge is good.”

By way of introduction, let us note that the University of Virginia Alumni Association this fall conducted a survey that gauged the opinions of UVa alumni on a wide range of topics relating to the university. Of the approximately 25,000 alumni solicited, 1,319 responded. Among other highlights, the survey revealed that respect for university founder Thomas Jefferson and the Honor System has waned among younger alumni. The association published the findings in Virginia magazine.

Now consider a previous survey. In March 2018, in response to a request from a working group of UVa’s deans, the Board of Visitors approved the expenditure of $80,000 to conduct the 2017-18 University Climate Survey. “Climate Survey,” for your edification, has no connection to global warming. It is an academic term of art for measuring how schools are doing in their core missions. Many universities conduct similar surveys and publish them on their websites. Here is the University of Richmond’s. Here is Wake Forest’s. Here is UVa’s 2015 survey conducted shortly after the infamous Rolling Stone rape story.

You will not find a copy of the 2018 survey. The UVa administration has suppressed it. I tried to obtain the summary document through the Freedom of Information Act. UVa denied my request. I filed suit in Henrico County General District Court. I lost the initial round, but the fight is not over.

I have filed for a new trial of this issue in the circuit court. But I would much prefer for UVa to just follow the law and demonstrate fealty to free expression and free inquiry by releasing the survey. I would like the Board of Visitors (BoV) to demonstrate good governance by insisting upon its release.

UVa’s deans requested the 2018 Climate Survey, and the BoV approved it in open session. The Climate Survey comprised a universe of over 30,000 current students, faculty and employees and generated over 6,000 responses. It was conducted with rigorous scientific standards, and it was officially approved by UVA’s Institutional Research Board (a requirement for “human subject” research). Respondents were ensured anonymity. If the Alumni Survey of a sampling of 12 classes over a 51-year span is deemed scientifically valid, would not the Climate Survey be much more so?

Someone decided not to release the survey results. Who? Was President Jim Ryan involved with that decision? Why would anyone want to suppress the findings? Were the findings embarrassing for the administration?

Members of the Board of Visitors, you approved the survey at the request of the deans’ working group. Please fulfill your governance obligations and demand that the survey be released.

The fictitious Emil Faber knew that knowledge is good. Can the same not be said of the university founded by Thomas Jefferson?

Walter Smith, a University of Virginia alumnus, is an attorney residing in Henrico County.

Talk about a lack of transparency at UVA!

Thank you for uncovering, Walter. Clearly the 2018 survey was negative or President Ryan would have released it and trumpeted its stupendous results. Keep pushing!