The Fascists Next Door 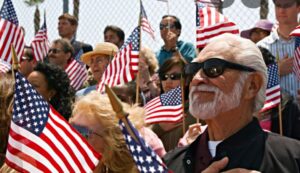 Want more evidence that the University of Virginia has become an impermeable thought bubble where people can say the craziest things without fear of contradiction? Consider this: Two University of Virginia professors —Manuela Achilles and Kyrill Kunakhovich — taught a history course this spring that portrays American conservatives as fascists. They weren’t being hyperbolic. They really meant it.

In their analysis, the wellspring of fascism is not worship of the all-powerful, totalitarian state — which conservatives totally reject — but the traditional American virtues of family and patriotism.

I first learned of this class from a young friend of mine. Here is her description:

Recently, I enrolled in a fascism class thinking it would be a great way to weed through the constant accusations that politicians make about who is fascist and who is not. The class started out great. We studied Hitler and Mussolini and other fascisms in Europe, then moved to Asia to look at Japanism, but the more the course progressed, the more I was confused about what fascism actually is. My professors chose to leave fascism undefined and allow each student to come to their own conclusion. That seems pretty reasonable, right? I thought so, too.

That is, until we started a unit on American fascism. All of a sudden only conservatives were fascist, only Christians could be racist, only Trump supporters could be violent. The professor argued that traditionalists, those with a rural past, constitutionalists, and those who “fetishized patriarchal masculinity” were all hallmarks of fascism. Essentially, anyone with the slightest bit of conservative thought is now akin to Adolf Hitler.

The scary thing about it was not just that we were being taught lies, but rather that at first it made perfect sense. I could see how “American fascism” aligned with Nazi Germany and Mussolini’s Italy. After going back through the material we had previously studied that semester and doing outside research, I realized just how much information had been left out. Nowhere does the course mention that Nazi means “national socialist.” Nowhere do we dive into how exactly Mussolini amassed as much power as he did (through a SOCIALIST agenda).

We patriotic Americans were raised to think that our fathers and grandfathers fought World War II to defeat fascism. How can we be fascists ourselves? Turns out, the definition is both murky and changeable but basically comes down to “Mom and Dad,” middle America, and anyone considered “conservative.”

The professor informed us only of aspects of European fascism that seem applicable to the American political atmosphere. We are under the impression that we are coming to these conclusions ourselves, but when all of the information is cherry picked for us, there is no true reason occurring, it is indoctrination. Is Trump a fascist, or only a demagogue? A demagogue or just dangerous?

Nowhere in the course did we study the dangerous progression of the leftist socialist agenda and how often that turns into the harshest form of fascism. I was lucky. Given my background and the natural hesitation in accepting everything that comes out of professors’ mouths, the disinformation was clear to me. Others might not be so lucky. I easily could have walked away truly believing that Trump was fascist, and I am sure many other students in that class did.

Reading included John Stanley’s recently published book, “How Fascism Works; the Politics of Us and Them.” “In all fascist mythic pasts, an extreme version of the patriarchal family reins supreme,” Stanley writes. “Further back in time, the mythic past was a time of glory of the nation, with wars of conquest led by patriotic generals, its armies filled with its countrymen, able-bodied, loyal warriors whose wives were home raising the next generation. In the present these myths become the basis of the nation’s identity under fascist politics.”

Another work from the class, Yale lawyer James Q. Whitman’s Hitler’s American Model: The United States and the Making of Nazi Race Law pits the reader squarely against middle America, and especially against supporters of President Trump or those with conservative sensibilities. In an interview with Salon staff writer Chauncey Devega in 2017, Whitman likened the victory of Trump’s supporters to Nazi Germany’s socialism.

Needless to say, a book that was not on the reading list was Jonah Goldberg’s masterpiece, “Liberal Fascism: The Secret History of the American Left, from Mussolini to the Politics of Change,” which traces the doctrinal and emotional roots of 21st-century progressivism to early 20th-century fascism.

Instruction at the University of Virginia is less and less about education and more and more about indoctrination, which to me, sounds kind of… what’s the word I’m looking for? Oh… fascist.