The Real Fascists Next Door 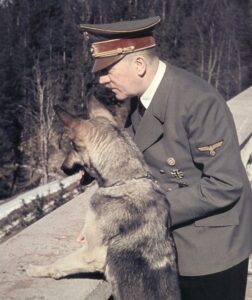 If you read the recent post, “The Fascists Next Door,” you would see that serious people at the University of Virginia — people who get paid actual salaries, not people who store their worldly belongings in stolen grocery carts — peddle the notion that middle-class Americans are fascists. Not all middle-class Americans, perhaps. Not the ones who think like them. Just those who wave the flag on the 4th of July, believe in the sanctity of the traditional family structure, and/or vote for Republicans. Apparently, such people are rooted in the mythic white-people past that gives rise to racism, sexism, and homophobia — in other words, fascism.

The Brainiacs who espouse such views about fascism, a doctrine that elevates the ideal of the all-powerful state, ignore the part where most middle Americans yearn to curtail the powers of the state. They also overlook the fact the fathers and grandfathers of these middle Americans, in all their toxic masculinity, waded ashore on D-Day into a hail of Nazi bullets on their way to, you know, overthrowing Adolph Hitler. Waving rainbow flags would not have chased the Nazis out of France. Indeed, if America had been counting on the snowflakes who melt from contact with college-campus “microaggressions,” we’d all be speaking German now.

According to the Middle-Americans-are-fascist line of thought, American patriotism equals rabid nationalism. Belief in the American nuclear family, in which most women work and few have more than two children, equals patriarchal German households where women stay home and bear babies for the Reich. Skepticism about “gender-affirming” surgery for transgender teenagers is the moral equivalent of throwing homosexuals into Nazi concentration camps.

As long as we’re labeling people “fascist” on the basis of strained analogies, I have a few comparisons to offer. (The main difference here is that my parallels are not strained at all.)

Who was the first politician since James I of England to make serious efforts to stamp out smoking? Adolph Hitler. A smoker early in life, the Big Nazi came to detest cigarettes. He called them unhealthy and “decadent.” The Nazi regime supported anti-tobacco research and suppressed the practice of smoking.

Who were the early 20th-century pioneers of animal rights? Why, yes, the Nazis. In 1933 the Thousand Year Reich enacted laws regulating the slaughter of animals. Hitler personally hated hunting, and he loved his German Shepherd Blondi. Nazi Germany was the first country to put the wolf under official protection, the first to host an international conference on animal welfare, and the first to ban the inhumane treatment of animals in the production of movies. Nazi chieftain Hermann Goering worked to end the practice of what he called “unbearable torture and suffering in animal experiments.”

Consistent with his views on smoking and animals, Hitler believed that meat-eating was harmful to humanity — and this was before anyone connected cow digestion with climate change! In his later years, he ate a strict vegetarian diet. He even disapproved of cosmetics because they contained animal by-products.

Who were the biggest early 20th-century champions of nature and the environment? You’re catching on — the Nazis. They established nature preserves, ordered the protection of hedgerows and wildlife habitats, and practiced sustainable forestry. They drew up plans to depopulate and “rewild” large swaths of Europe and replace domestic cattle with wild species such as the auroch. They regarded Jews, Christians, capitalists and communists as enemies of nature.

Hitler’s views on religion are a matter of scholarly dispute, but it is safe to say two things: He was not a practicing Christian, and he brought Catholic and Protestant churches under the boot-heel of the state. Other Nazis, most prominently Henrich Himmler and Alfred Rosenberg, developed an elaborate ideology based upon the pre-Christian tradition of tribal Germanic gods and hoped to destroy Christianity.

While Nazi ideology said that women should get married, bear children, and raise good little Nazis, Hitler himself did not conform to the expectations of the age. Indeed, his lifestyle was quite “progressive” for the era. He never married his mistress, Eva Braun, and he never had children.

So, let’s review. Not only did Hitler love big government, he hated smoking. He was a vegetarian. He promoted animal rights. He was an early environmentalist. He was anti-church. He adopted an unconventional family structure. Based on those parallels, it looks to me like he would have felt quite at home as a faculty member of the University of Virginia! Oh My God, that must mean… UVa faculty members, like all political progressives, are FASCISTS! Pant! Pant! Hyperventilate!

Just remember, when people on the far Left refer to themselves as “anti-fascist,” they’re not talking about Hitler and Mussolini. They’re talking about you and me.