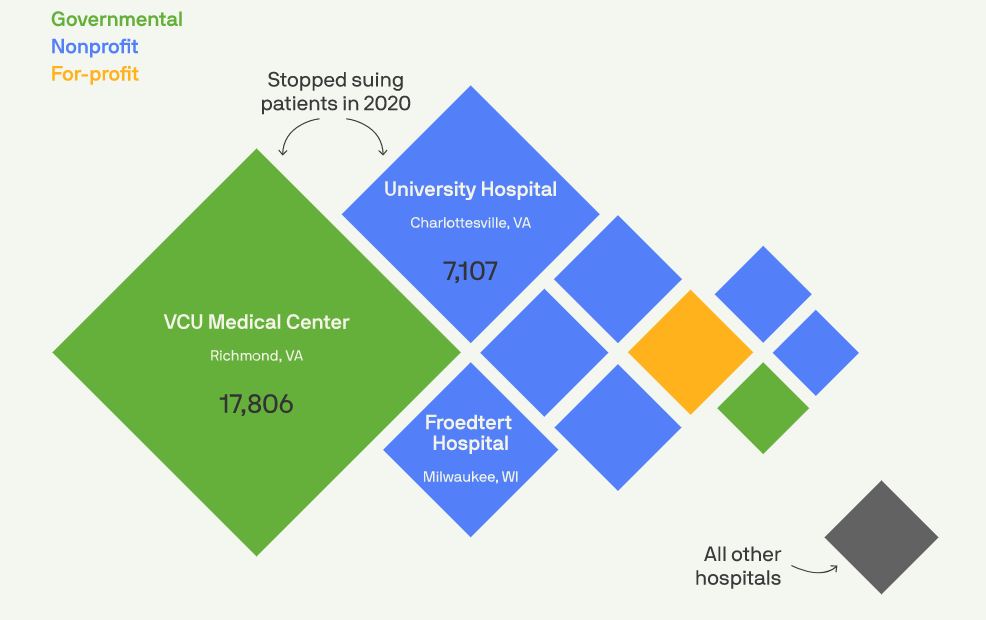 Medical debt, which comprises 58% of all debt collections in the U.S., is the leading cause of bankruptcy in the United States. Between January 2018 and July 2020, hospitals filed tens of thousands of lawsuits and other court against against patients, according to AXIOS, which drew upon Johns Hopkins University data. Until a public outcry compelled them to stop suing patients last year, the two most aggressive debt collectors in the country, by a wide margin, were the VCU Medical Center in Richmond (17,806 court actions) and the University of Virginia hospital in Charlottesville (7,197 court actions).

What do the VCU and UVa hospitals have in common? Several things. First, both enjoy nonprofit status. Second, both generate significant profits. Third, both are teaching hospitals affiliated with large research universities. Fourth, both universities are governed by self-perpetuating oligarchies accountable to no one, least of all to patients. Fifth, both are incentivized to suck every dime they can out of their customers to fund the thing that confers institutional prestige — medical research.

This is what social injustice looks like in the real world: Academic elites exploit the medical patients in their care to bolster profits and research funding. The fixation on racial injustice — obsessing over memorials named after slave holders and Civil War veterans, apologizing for sins that occurred a hundred years ago — is nothing but a dodge and a distraction.