“This Is the cost of ignoring white supremacy” 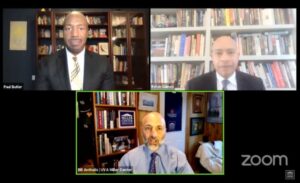 The University of Virginia’s Miller Center kicked off 2021 with a virtual discussion entitled, “Race Relations and Criminal Justice in the New Year.”

The speakers used the Jan. 6 storming of the U.S. Capitol building by right-wing extremists as a jumping off point to discuss systemic racism.

In contrast to the police officers and National Guard who greeted Black Lives Matter protests in riot gear, the congressional police officers who defended the Capitol building were lightly equipped. “For many in law enforcement, it seems a violent mob of white men is not nearly as threatening as a gathering of Black people and their allies peacefully exercising their First Amendment rights,” Gaines said.