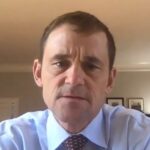 Over the past four years the University of Virginia has raised $500 million, enough to endow 350 undergraduate and graduate scholarships, President Jim Ryan informed the Board of Visitors Friday. He highlighted two programs in particular that share the goal of “fostering excellence and diversity of the student population, and ensuring their success.”

The University Achievement Awards, inaugurated during the presidency of John T. Casteen are given to Virginia students who demonstrate outstanding leadership and character while overcoming personal hardship. The Blue Ridge Scholars program, launched in 2014 with a $4 million gift from alumnus John Griffin, supports undergraduate students with exceptional academic promise and significant financial need.

The need for financial assistance has intensified over the years as UVa has aggressively increased tuition, fees, and charges for room and board. The annual cost of attendance (including books and modest personal expenses) runs around $34,000 for undergraduate Virginians and $69,000 for out-of-state students before financial aid is taken into account.

The university recently pumped up its financial-aid endowment with a $30 million contribution from the Strategic Investment Fund (SIF), a fund consolidated from various business accounts and other sources that the University of Virginia Investment Management Company (UVIMCO) is able to invest at higher rates of returns than would be generated otherwise.

Ryan lauded the Blue Ridge Scholars program, which he described as “a really effective recruitment tool” used primarily to recruit out-of-state students. The program supplements other sources of financial aid with grants of $1,000 to $7,000 yearly per student. “It has enabled us to recruit some phenomenal students who would not have attended,” he said.

UVa is prohibited by federal law from granting financial assistance based on ethnicity or race, and the financial aid website states, “We accept students solely on their academic merit, regardless of their ability to pay.” However, as Ryan described it, the University Achievement Awards have broader criteria than academic merit alone. Scholarships, he said, are given to students who have shown leadership, have a history of overcoming adversity, are members of a minority ethnic group, reside in a rural or inner-city location, or are members of a single-parent household.

Ryan told the Visitors that he has met with the board of the Walter N. Ridley Scholarship Fund, a privately maintained fund named after the first African American to graduate from UVa that dispenses scholarships to African American students, although he did not say to what purpose. Ryan said the University Achievement Awards and Blue Ridge Scholars program “give us resources to … bring exceptional students to the university and increase diversity.”

Bacon’s bottom line: As an elite institution with considerable market-pricing power, UVa pursues a revenue-maximization tuition model tempered only by the political necessity of restraining tuition & fees for in-state students. This model allows the university to pursue prestige-enhancing initiatives — such as recruiting superstar faculty and students with high SAT scores — that support its quest to remain one of the nation’s leading public universities. However, the high-tuition model also makes attendance unaffordable for students from lower-income families, in particular from African-American and Hispanic families, thus undercutting diversity. Building up a $500 million scholarship endowment papers over the inherent tension between the goals of pursuing “excellence” and increasing diversity.

This article has been republished with permission from Bacon’s Rebellion.