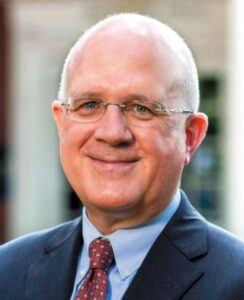 Pity poor Stephen Farmer. The newly appointed vice provost for enrollment at the University of Virginia has a thankless job: fulfilling the goal of admitting more African Americans and Hispanics, even as Virginia’s flagship university has inadvertently branded itself as a racist institution.

Farmer’s appointment was highlighted in the most recent issue Virginia, the UVa alumni magazine. A UVa alumnus, Farmer was recruited from the University of North Carolina at Chapel Hill where he was vice provost for enrollment and undergraduate admissions. With a record of attracting more first-generation students and students from underrepresented minorities, Farmer has made “remarkable contributions to the shape of the class,” says Provost M. Elizabeth Magill.

Taking charge of both undergraduate admissions and student financial services, Farmer will build new strategies for attracting applicants and supporting students’ financial needs. “There’s a real logic in bringing them together,” Magill said.

He has two big challenges. First, in its recent report, “Audacious Future: Commitment Required,” UVa’s Racial Equity Task Force has articulated the goal of building a student body that “reflects the racial and economic demographics of the Commonwealth of Virginia.” Only 7.4% of the undergraduate student body is African-American, compared to about 20% of Virginia’s population. Only 7.4% is Hispanic, compared to about 10% of the state population. Asians are significantly over-represented: 17.1% of the student body compared to 5.6% of the state population. Whites are slightly under-represented.  (These numbers are calculated from data published on UVa’s Diversity Dashboard, omitting foreign students and students whose race is unknown.)

The second challenge is that UVa has aggressively increased tuition, fees, room and board over the years, including a 3.6% in tuition this year. Indeed, according to the Cavalier Daily, the Student Council and Young Democratic Socialists of America have launched campaigns to push for a tuition freeze in the next two academic years, citing financial difficulties for many students caused by the COVID-induced recession. While UVa has increased financial assistance, the net cost of attendance continues to increase, disproportionately impacting students from low-income and disproportionately minority families.

Farmer’s problem is compounded by the fact that the university already discriminates in favor of blacks and Hispanics in admissions. According to the 2019 study, “Preferences in Virginia Higher Education,” 35% of blacks who apply to UVa are admitted, compared to 32% for Asians and Hispanics, and 30% for whites — even though Asians had higher median SAT scores (1480), as did whites (1420), than Hispanics (1350) and blacks (1240).

The question Farmer must grapple with is why would a black student want to attend UVa under any circumstances? Here’s what the racial equity task force appointed by President Ryan had to say about UVA:

The University of Virginia was built by enslaved laborers, on Monacan tribal land, and the enslaved people provided labor and knowledge that supported the students and faculty from the time of the University’s founding through the Civil war. In the twentieth century, UVA faculty were important contributors to the eugenics movement and supported segregated schools. The University itself only opened its doors to racial minorities and women when forced to by lawsuits in the 1960s and 1970s.

It is no exaggeration to say that UVa’s administration has been wallowing in its racist past and has kept injustices (to borrow an advertisers’ phrase) “top of mind.” Many students regard UVa as a racist institution, as vividly demonstrated by the fourth-year student residing in a prestigious room on the Lawn who posted the now-infamous “FUCK UVA” sign on her door, and as also expressed by Student Council members (documented by Bacon’s Rebellion) during a recent controversy over the recent joke by a Commerce professor that was widely deemed to be racist.

While UVa may invite a higher percentage of blacks than other races to attend, according to the racial equity task force, blacks and Hispanic students accept UVa offers of admission at significantly lower rates — 10 percentage points — than whites and Asians do. The task force cited a student survey in which 48% of black students and 23% of Hispanic students do not agree that individuals of their race “are respected,” as compared with only 4% of whites.

There is a legitimate question of why blacks and Hispanics are so much more likely to feel unwelcome at UVa. Do perceptions reflect objective reality, or are they shaped by the prevailing ideology that cultivates the sense of minority victimhood and grievance? I suggest that minority grievance at UVa, which has gone to great lengths to atone for its past, stems from students being taught to see every interaction through the prism of race and to view “micro-aggressions” as symptomatic of endemic racism. I also suggest that the UVa administration has been complacent about addressing this corrosive ideology, if not actually complicit in perpetuating it.

However justified or unjustified the perceptions of minority students, when it comes to admissions, perceptions are their own reality — and Farmer will have to deal with them.

Stop considering race and giving 200+ points simply for being black and the rest of the campus will look at them as equals. Would blacks respect whites if they got 4 points for every basket and not 2 or 3 like the other players? Merit.